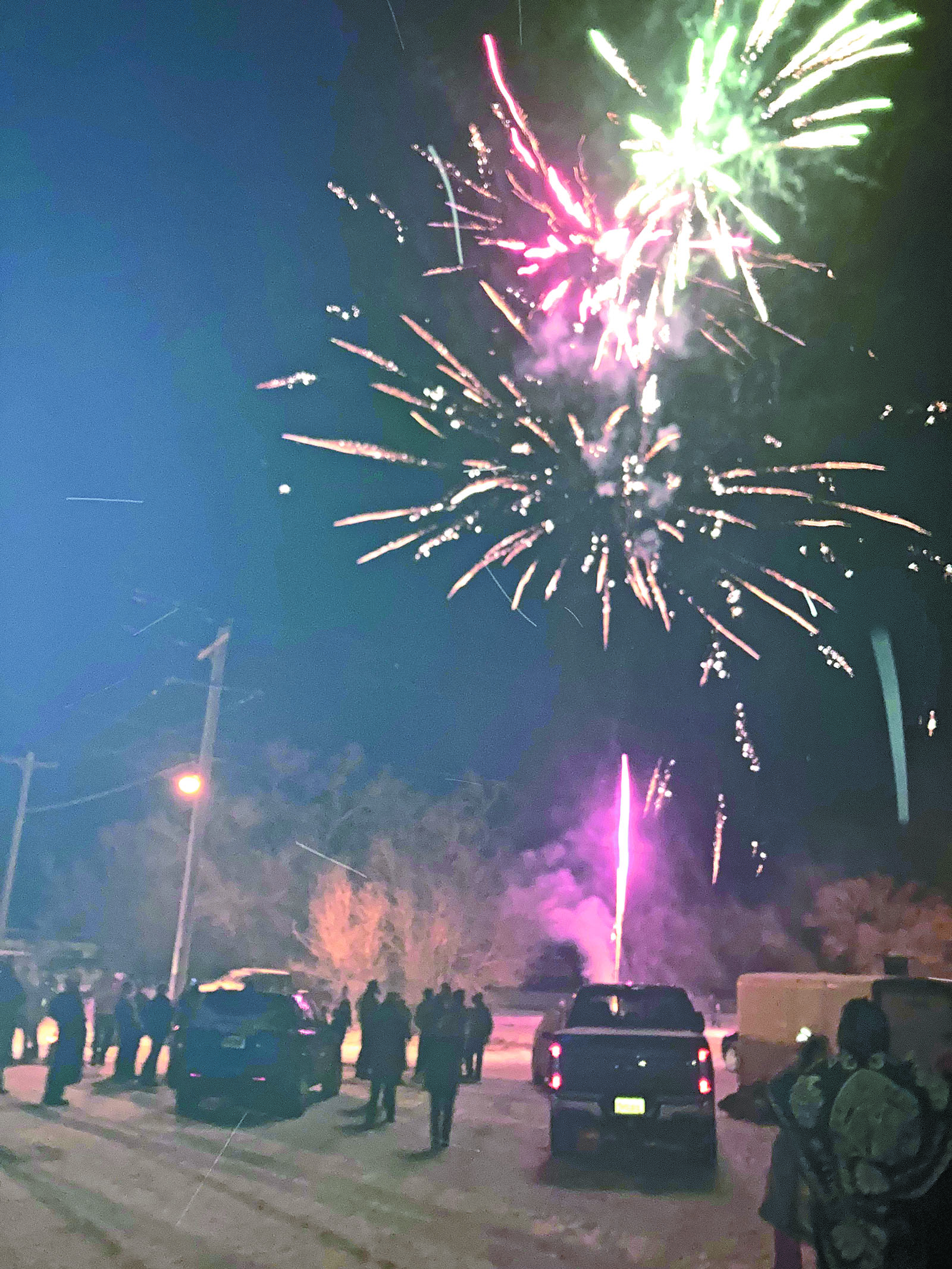 It is estimated that between 200-300 people attended the fireworks display in downtown Edgemont last Friday night, which helped ring in the New Year for area residents.

EDGEMONT – It might not have been the most inviting of outdoor conditions last Friday evening as single-digit temps hit the area, but that didn’t stop hundreds of people from enjoying the festive atmosphere in downtown Edgemont at Igloo Bar and Victory Steakhouse, where folks were gathered to ring in the new year.

Julie Silvernail of Victory Steakhouse was pleased with the evening and the turnout, which resulted in a sell-out of prime rib. Some crooned their favorite tunes during karaoke, others played cards, while most simply enjoyed the company of friends and family in the bar room.

Cad Waite, co-owner of Igloo Bar and Hat Creek Grill, estimated that between 200-300 people visited downtown at some point in the evening, even if they didn’t stick around until the clock struck midnight.

“Despite the cold, people still came out to celebrate,” said Waite. The cold snap got the attention of a couple of absentee landowners in Ruby McGeehan and David Potts of Brooksville, Fla., who said they “left 80 degree weather for 8 degree”, but insist that one day Edgemont will be home as they love the community.

Concerning expenditures related to the fireworks display, Waite said that donations contributed at Igloo Bar and Hat Creek Grill covered all fireworks costs, which included $2,000 for the fireworks package and $426 for liability insurance, which was required by the City for its approval of the event. Waite added that due to liability associated with fireworks displays, future shows will continue to be privately funded through community citizens and patrons of local businesses.

As deejay Lyle Edmonds assisted Igloo Bar patrons in their effort to jam their way into the New Year, a few willingly shared their plans and even a resolution here and there, although resolutions appeared to be a little too formal for some to embrace. For some like Jess Tubbs, the timing of the new year just happened to coincide with starting down a new path. Tubbs will begin her student teaching this month at Hot Springs and anticipates completing coursework for her undergraduate degree in physical education at Chadron State College in May.

New Edgemont resident Derrick Hoffman Brickert said his New Year’s resolution was to complete home renovations so he can throw a house party later this year. He purchased his residence in April, moving here from Lakewood, Colo.

Zack Graham, another Colorado transplant, has political ambitions in the new year as he says his resolution is to promote Governor Kristi Noem as the Republican presidential candidate, although Noem has not announced herself as a candidate. Graham has been a resident of Edgemont for 15 years.

Larry Harter humbly declared that his resolution was to be a better human being than he was last year. Two couples, Carol and Pat Danks along with Dane and Bethany Hirchfield, stated plans to kick the smoking habit in the coming year.

Hat Creek Grill and Igloo Bar said they wanted to extend a special “thank you” to Gary and Peggy Kester of Kester Roofing for their generous donation to the fireworks show. They also would like to thank Bobby Johnson, Pat Danks, and “Fireworks Frank” and any other contributing patrons that made donations to toward the cost of fireworks.