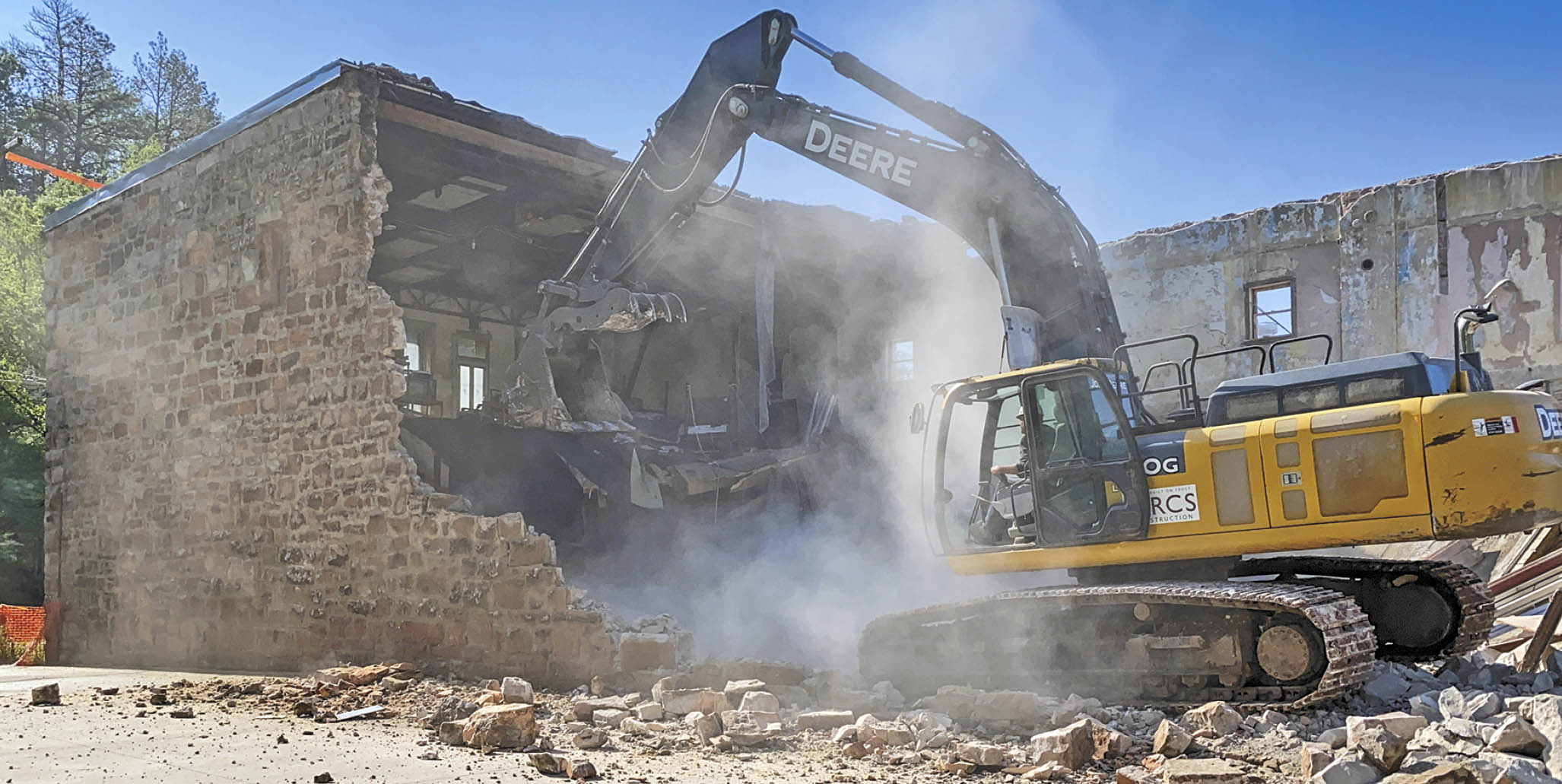 One of the stories which dominated the headlines of the Fall River County Herald-Star during the spring of 2021 was the eventual demise of the Wesch-Oak building in downtown Hot Springs, which was knocked down June 9.

HOT SPRINGS – As one would guess, COVID-19 related stories were again a part of the Fall River County Herald-Star headlines in 2021 as they were in 2020. But as the year progressed, and as many of the things which were put on hold during 2020 began to come back, it started to become apparent that coronavirus was becoming a part of the new reality of life and a lesser part of the headlines.

One of the pandemic-related features of this newspaper which debuted towards the end of 2020 and still remains a part of the front page to this day is the weekly “Local Data on COVID-19” update. According to the Dec. 31, 2020, Fall River County Herald-Star, as of that week, there had been a total of 443 cases of COVID-19 in the county, with 28 active cases that week and a total of 12 deaths. At that time, Fall River County had been averaging 12 cases per week over the previous 12 weeks (October/November/December) with that number trending slightly downward.

According to the data that came out earlier this week, Fall River County has now had a total 1,260 cases (increase of 817 in the past year) since the pandemic began in early 2020, with 17 new cases in the past week (5 more than the average per week last year at this time) along 75 total active cases currently (47 more than the same week last year) and a total of 29 deaths (17 more than one year ago). So as it would appear, we really haven’t come that far in the past 12 months, despite the availability of vaccines in 2021.

Aside from the occasional coronavirus-related headline, there were far more other things which filled the pages of the Fall River County Herald-Star in 2021, including a number of multi-part feature story series which have become a popular attribute of the newspaper.

Despite debuting in 2020, the “Naming Writes” series by Marcus Heerdt concluded in July of 2021 with seven more installments featuring the namesakes of Jennings Avenue, J.H. Keith Memorial Park, Badger Clark Road, Woodward Field, Michael J. Fitzmaurice State Veterans Home, Tays Center and Dave Scott Track and the Helen Magee Room at the Hot Springs Public Library. Plans are currently underway to compile all 12 of the Naming Writes stories into a book, which is hoped to be released for sale sometime in 2022.

Maness also wrote a four-part series entitled “100 years of memories” through eyes of Hot Springs’ four centenarians, who at the time, all resided at Pine Hills Retirement Community: Carolyn Curl (107), Mae Niedermyer (105), Maggie May (103) and Margaret Lewis (102). Sadly, over the last half of 2021, three of the ladies in the feature series passed away with only 103-year-old Maggie May still making her home at Pine Hills.

A couple other popular news series were in reference to the area’s booming real estate markets. A three-part series entitled “Fall River Dreamin’” by Marcus Heerdt was published in August and September and featured stories about new residents, the local housing market and the recently released 2020 census data. Another four-part news series entitled “Exploring the commercial real estate opportunities in the Hot Springs area” debuted in November and summarized all of the recently listed and sold commercial properties.

Also featured each month in 2021, and also in this week’s Dec. 30, 2021, edition is the always-popular and award-winning Fall River Rhapsody photo essay by Dick Kettlewell.

A number of the past year’s headlines also covered several of the area’s local community events, which included some which were either canceled or altered in 2020. Events like Stars, Stripes & Steps; the Main Street Arts & Crafts Festival; the Fall River County Fair in Edgemont; the Fall River Hot Air Balloon Festival; the Southern Hills Triathlon; the 911 Stair Challenge; the 75th annual Oelrichs Last Roundup Rodeo and others all saw record or near-record participation in 2021.

In sports, some of the highlights included the Edgemont volleyball team making its first-ever appearance in the Class ‘B’ SoDak 16. The Moguls also had a pair of athletes earn some notable individual honors including junior Morgan Peterson winning a Class ‘B’ state title in the 300-meter hurdles and senior Caleb Simons setting several new school records in boys’ basketball.

Other ongoing items often read in the headlines of the Herald-Star in the past year related to the demolition of the Wesch-Oak building along with ordinances involving the dispensing of medical marijuana. Following is a chronological listing of the top-12 headlines of each of the previous 12 months. Enjoy!

• Vaccine not yet available to general public; Phase C1 group vaccinations to begin this week

• Alex Christopherson to give the gift of life to sister Cherokee

• Weekend winter storm causes temporary shutdown to much of area

• Edgemont earthquake the third in the state since December

• Pat DeSmet is Citizen of the Year, several others honored at Hot Springs Chamber Awards Night

• Wesch-Oak demolition project to commence 3rd week of May

• Christopherson is home, healthy with a new kidney

• Citizens taking control of downtown weeds for ‘Volunteer Clean Up’

• Commission receives thanks from residents of Shep’s Canyon Road

• 13 Mustangs parade through town for the 13 fallen soldiers

• Couple raises 34 monarch butterflies at their home in Hot Springs

• County wants input on how commissioners are elected