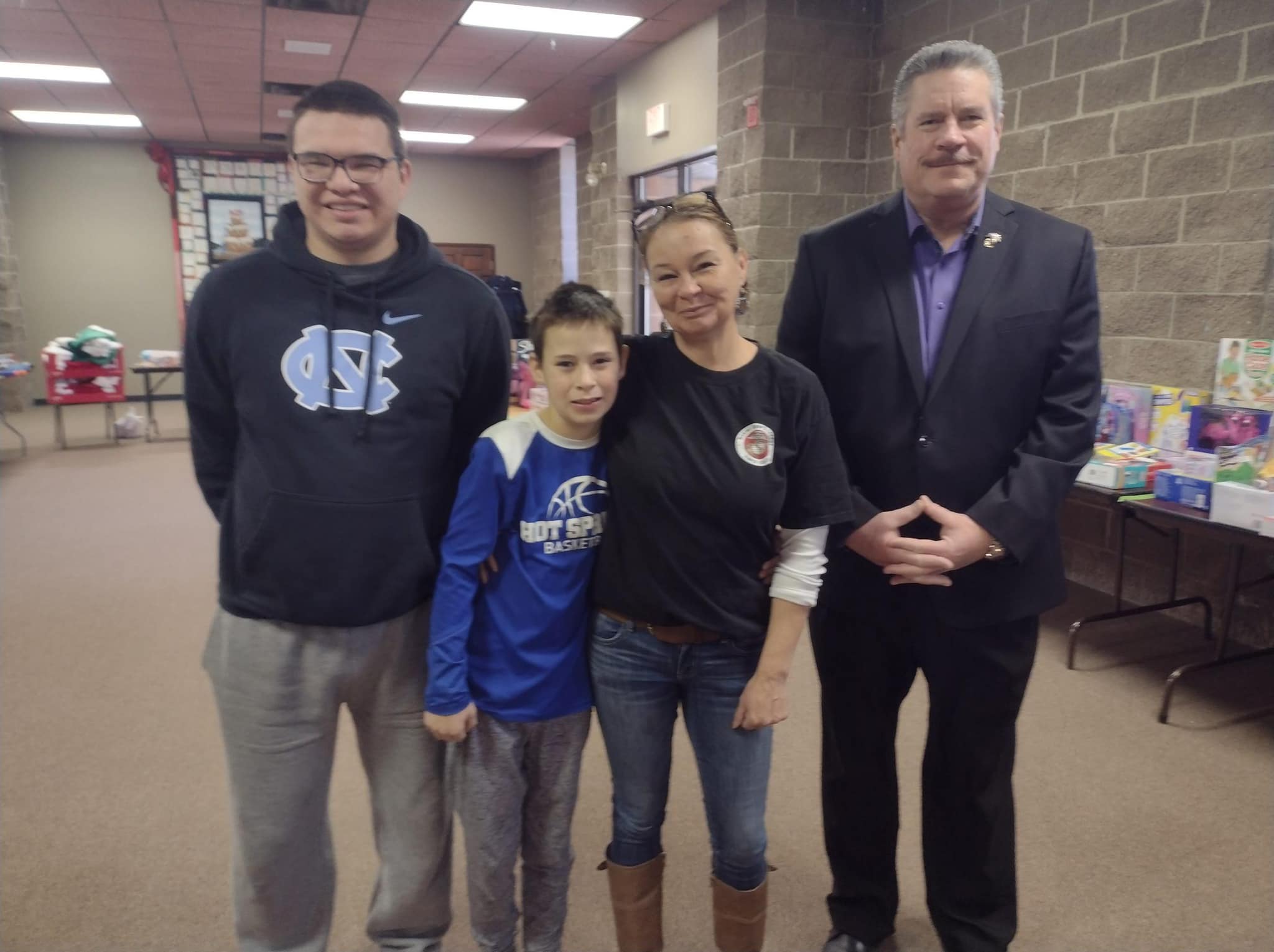 Nikki Shaw poses with her two sons, Tristian and Xander, along with Marine Corps League Detachment 1388 Representative John Henderson, who all volunteered at the recent Toys For Kids event in Hot Springs.

“We started fund raising in February with a target to raise funds for more than 100 children,” said Nikki Shaw, resource coordinator for the Toys for Kids program. “I can’t thank our supporters enough; local businesses, donors and event attendees. Without them it would be almost impossible to raise the funds we need every year to make Christmas bright for these families.”

According to Shaw, Toys for Kids began many years ago as a partnership between the Hot Springs Police Department and the Southern Hills Biker Association, as both organizations slowly got away from the effort, Shaw continued on with it in association with the Empowerment Coalition and the Marine Corps League Warrior Detachment 1388.

“I was involved in both organizations and they both were excited to continue with the program,” said Shaw.

Children 0-12 years are eligible for the Toys for Kids and must be registered through the Empowerment Coalition prior to Christmas each year by calling the coalition at 605-745-3082.

Yearly, the fund raising efforts are kicked off with a dart tournament in February “which sets the pace for the rest of the year,” said Shaw. “In August there will be a Toys for Kids Poker Run and I have something fun up my sleeve planned for a Fall fund raiser,” smiled Shaw. Additional donations are collected during the holiday season with Toys for Kids clear plastic teddy bear banks which are placed in businesses throughout town for donation collection.

After all the fund raising events are held, and all the funds are in the bank, the big day finally arrived when Shaw’s group got to go shopping for all the children.

“We are given an age and whether it’s a boy or girl,” said Shaw, adding another layer of mystique to the shopping process.

Shaw along with friend Valerie Henry CEO of the Empowerment Coalition, and sons Xander and Tristian in tow headed out for a day of shopping.

“My husband Doug, lucky guy, had to haul the trailer we needed for all the gifts. A trailer so thankfully lent to us by Dave Owen and Shannon Livesay; such a blessing, made our lives so much easier.”

The shopping crew began locally hunting for gifts for the many children and eventually headed out of town.

“We tried to keep as much of our shopping local,” said Shaw.

After a full day of shopping, the loot was unloaded from the trailer and organized in the Mueller Center by age and boy or girl.

“We worked within a budget trying to get one large, one medium, and one small gift for each registered child.”

Then the fun began.

On Dec. 18, parents came in and choose the gifts they wanted for their child/children.

“The families that come through are just so grateful and appreciative,” said Shaw. “Some parents have tears in their eyes, they are so happy. It warms your heart.”

Shaw, originally from Kyle on the reservation, is made of pretty strong stock. Her grandparents, who raised her, were both decorated Army soldiers. That strong DNA is what keeps her passionate about her volunteer work throughout the community as she sits on many boards and volunteers for many organizations.

“I plan on doing this until I can’t anymore; hopefully my kids will be around here and take it over when I can’t do it anymore after all, they’ve been doing it most of their lives, they know what to do.”

If you would like to contribute financially to the Toys for Kids program, donations are accepted year-round at the Black Hills Federal Credit Union Empowerment Coalition Toys for Kids bank account.

Though Shaw admits “I have a pretty darn good crew, I sometimes need additional help.” If interested in helping with any Toys for Kids future events contact Shaw at 605-840-2567.