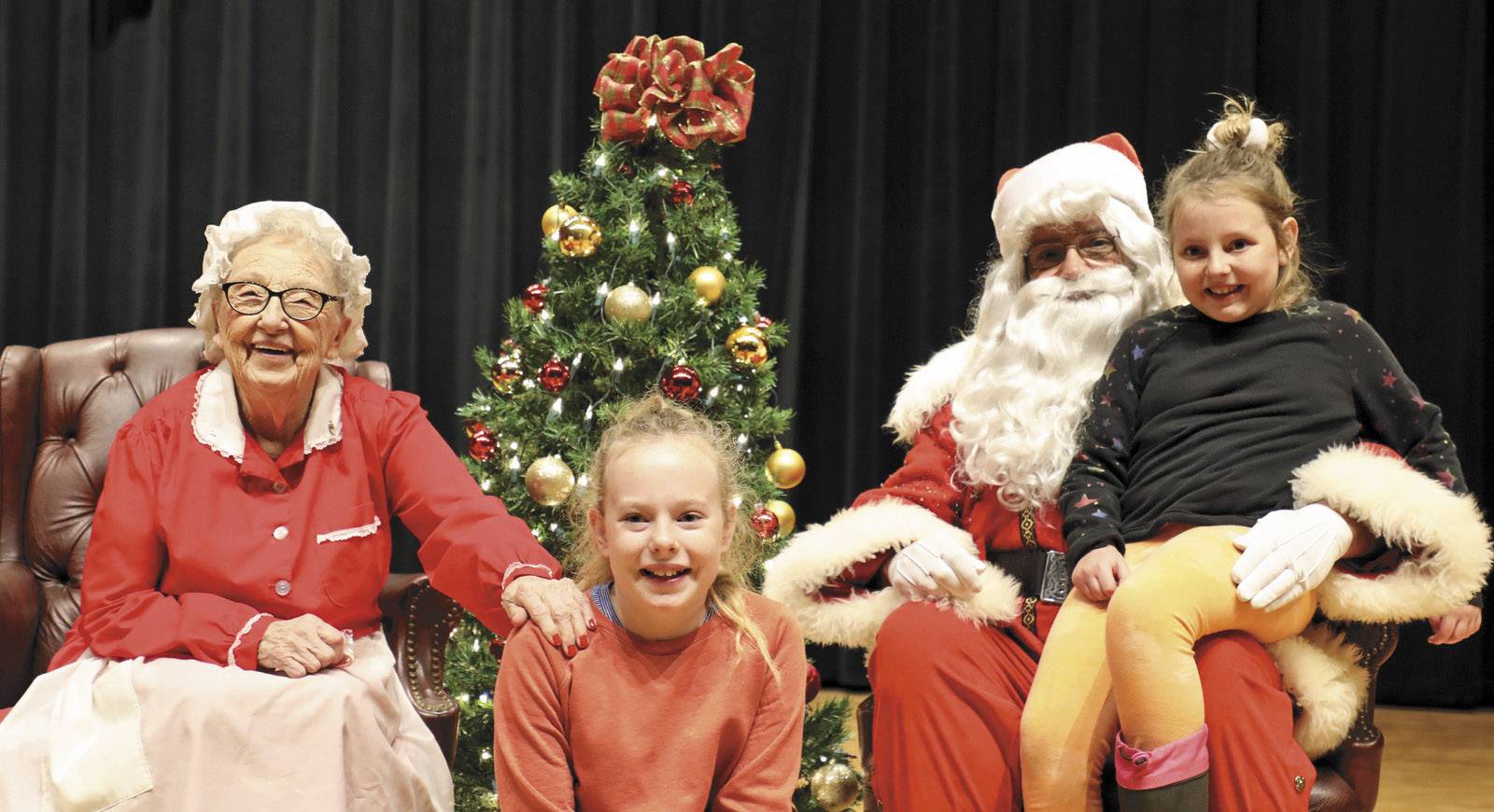 Gladys Pullins of Hot Springs, left, says she thoroughly enjoys being Santa’s helper throughout the Christmas season. Here, she is pictured as Mrs. Claus with Anabelle Mauck, 10, and Charlotte Mauck, 8, who were excited to visit with her and Santa at the Mueller Center during this year’s 44th annual Christmas in the Hills celebration.

HOT SPRINGS – In 1977, Gladys Pullins played the role of a lifetime, one that would create a love of Christmas year round; the part of Mrs. Claus.

“It was so much fun,” Pullins said of that experience, “that I have done it ever since.”

Pullins was born in 1927 and grew up on a ranch outside of Belle Fourche, the oldest of four children.

“I remember walking four miles to school or in the winter going on a sled or a wagon,” she said. Days started early on the family ranch with the feeding of animals and milking of cows. “We had to work in those days,” she said with a smile.

When she was seven-years-old, she began school at a one-room schoolhouse, an experience that would unknowingly shape her future.

On cold winter days, her teacher would warm soup on the heating stove so the children could have warm soup to warm up their little bodies.

It was here, in the first grade that Pullins knew she wanted to become a teacher when she grew up. “I had two goals in life, to be a mother and a teacher.”

She met her husband to be, Dale Pullins, when she was in the second grade.

“He was in the 7th grade and he was a naughty boy,” she laughed. “He chased me around the school house, so I didn’t really care for him.”

As ranch children grew and needed to attend high school they often relied on families in neighboring cities to host the children while they attended high school, as the schools were too far away to attend daily.

“I stayed with relatives in Belle Fourche until I was a junior, but then lived with my aunt in Sturgis and graduated from there in 1946.”

In her junior year, she reconnected with Dale and they began to date.

“By my senior year I knew I was in love, but I never imagined he liked me that much, I was just a plain country kid.”

When Dale turned 18, he went into the U.S. Army and served in Italy.

While Dale was serving overseas, Gladys studied to become a teacher. “I was in my first year of teaching when he came home.”

“We wrote letters,” said Pullins, “lots of letters,” she smiled. Those letters cemented their love for each other, so much so, that she has saved them to this day.

“We were married 62 years,” said Pullins. Dale passed away in 2008 due to cancer. “He was my husband and he was my best friend.”

In 1977, while raising children, running a daycare and a happy home, life would take a fun turn for Pullins.

A few families in Hot Springs had the idea to bring a German Christmas season tradition to the little town, the tradition of a Christmas Market and Christmas in the Hills was born.

“Well, I was running a daycare center and my neighbor Connie, who lived across the street, asked if I would be Mrs. Claus for their first Christmas in the Hills,” said Pullins, “and I said yes, of course. But this was back when they put the booths outside and we got 15 inches of snow the day of the event. So they had to move the booths from the outside to the inside so it was held in the old City Auditorium, which was torn down years ago.”

“I had so much fun,” she laughed, “it was just so much fun talking to all the children, and I have done it ever since.” Claiming to have only missed two years, one due to cancellation of the event and the other due to illness.

While Pullins shared the funny things children asked for – from ponies to technology – the one she remembers the most still brings tears to her eyes. “I remember one little boy, he asked for his mother that had passed away that year. That was a real tear jerker.”

“I’ve always liked Christmas,” said Pullins, “but being Mrs. Claus is the highlight of my year. I look forward to it all year long. Just seeing all those kids with their big smiles fills my heart with so much love.”

Being Santa’s helper, aka Mrs. Claus, has created a year-round Christmas cheer for Pullins, which is apparent in her volunteering, giving the gift of her time and love throughout the year.

“I’m slowing down, but I still enjoy it all. I actually enjoy it just as much as I did when I was young,” she laughed.

However, playing Mrs. Claus can cause a bit of confusion with local youth.

“One time I was substituting at school just after a Christmas in the Hills and this one little girl said to me, ‘Are you the real Mrs. Santa?’ I explained that I was his helper and that I am Mrs. Santa when Santa comes to town. She looked at me with a puzzled look and said, ‘I don’t care what you say, you are the real one.’ And that was that.”

During the Christmas season, one of Pullins’ favorite things to do is to read The Night before Christmas to children and adults alike.

“I’ve read The Night before Christmas for daycares, foster centers, schools, at the library and here at Pine Hills, I’ve read it so many times I almost have it memorized, it is my favorite Christmas book.”

Each year as time marches on, Pullins hopes it will not be her last year to bring joy to the town as Mrs. Claus. But she vows to continue as long as she can.

“I am going to do this as long as I can walk and talk,” said Pullins.

In 1994, Christmas in the Hills was dedicated to Pullins. This honor is held near and dear to her heart, yet she does this for the children as much as for herself.

“It makes me feel very good, giving of myself, making children happy, to see their smiles, I just love them all.”