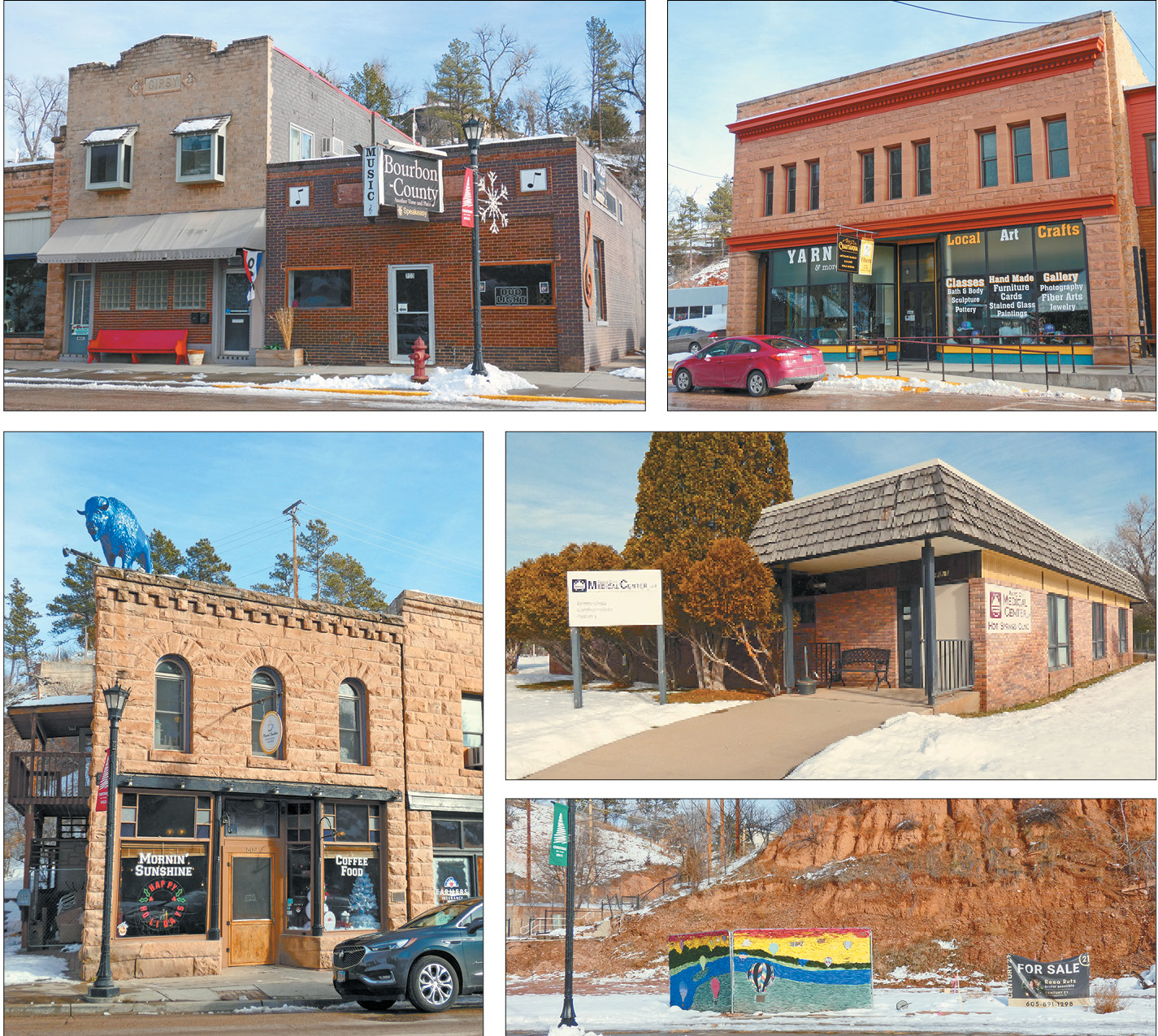 By Marcus Heerdt and Brett Nachtigall

Part 4 is the final installment of the series, and will include properties that are either under contract by potential new owners and those that are still listed for sale.

The building that houses both Fall River Fibers and Chautauqua Artisans Market located at 629 N River in downtown Hot Springs has recently gone under contract with a potential buyer from out of town. The building has been listed by Christine Heidebrink of Mt. Rushmore Properties and Homes with an asking price of $775,000.

The historic, neo-classic sandstone building was built in 1905 and was originally named the Evanston Block. According to historic records, the “Evanston” was “built under contract” for Mrs. Theresa Evans, widow of one of Hot Springs’ founders and pioneer developers, Fred T. Evans, who died in 1902. The sandstone used for the building came from the Evans Quarry.

Since 2016, Gary and Terry Slagel of Hot Springs have owned the building and have worked on a great number of improvements in the past five years.

“Our goal was always to upgrade and restore the building and then perhaps look at other opportunities,” Terry said. “We just finished all of the improvements this past September.”

Some of the improvements made by the Slagels include new windows, exterior doors, flooring, lighting, HVAC system, restroom fixtures, as well as a completely redesigned upstairs. The entire upstairs was gutted and then remodeled into four new living spaces by an architect firm out of Rapid City.

Terry explained that Fall River Fibers and Chautauqua Artisans Market are not expected to go anywhere anytime soon and will remain in the present building, and that the Artisans Market will continue to offer classes and events for the public.

“We did what we set out to do, which was to add another piece of commercial property to the downtown area and bring in new people to town to invest in our community,” Terry summed.

This business located in an historic 1915-built sandstone building at 509 N. River Street was for many years the site of Donnell’s Art Supply. It however was remodeled by the Donnell family a few years ago into a coffee shop and eatery. It is currently owned and operated by a trio of ladies – Debra Garcia, Christina Rohde and Kim Moir – who purchased it in February 2020 and performed an extensive remodel, which included updating most of the interior, along with the appliances, furniture, fixtures and flooring.

It was listed for sale with Lewis Realty/Keller Williams Realty Black Hills on Oct. 29, 2021, for $549,000 and includes the business, land and building. In addition to what is available on-site, the business also includes a coffee kiosk at Fall River Hospital as well as an enclosed trailer for event catering.

According to co-owner Kim Moir, their business has had a “very lucrative” past year – especially during the tourist season from May to September – but due to some changes in their company’s overall plans for the future, the three ladies decided to each sell their interests in the establishment.

Thus far, Moir said their realtor Faith Lewis has said there has been a number of inquiries about the property, but as of yet, no offers have been put forth.

“This is a complete turn-key opportunity,” Moir said, while adding how the upstairs includes an open floor plan for someone to either utilize the space as an apartment or as additional dining or for retail.

The owners began their business venture together during the summer of 2018 when they had Good Karma Couture, which they operated out of the former Carnegie Library building, across from the post office. However, after purchasing this building at 509 N. River in 2020, they moved the retail clothing business to the back room there and then later to the second level. They however have since liquidated the boutique’s inventory and have focused more solely on the food and coffee business as of late.

The business currently staffs 12 employees and is open seven days a week for breakfast and lunch. Moir said they are planning to open for dinners a few days a week beginning in January.

Bourbon-County Speakeasy is also under contract with potential new buyers. Built in 1923 and historically known as the “Gipsy Building,” the property has been listed by Resa Rutz of Century 21 Stevens and Associates with an asking price of $499,000.

Owner Jeff Consoer bought the building at 705 N River in 2015 and has been operating the establishment ever since.

“The important part of this story is about Hot Springs,” Consoer said. “The city is a unique space and once you’re here and been here it leaves an impression on you. The weather is amazing, the scenery is amazing, and the vibe that Hot Springs gives off is hard to ignore.”

Consoer said he moved to Hot Springs from Denver eight years ago so that his children could have a nice small town to grow up in.

But disappointed with the lack of nightlife in town, Consoer said he just had to invest his time and energy into downtown Hot Springs. In addition to the speakeasy, Consoer planned to open a restaurant in the adjacent building to the north, but said that it was time for him to sell “and let somebody else take the next step.”

Consoer explained that family was the main reason why he moved to Hot Springs in the first place, and now family is pulling him away from the area because his parents live in Arizona and are experiencing some health problems. Also, Consoer said that he is at a good time in his life to retire from work completely and spend more time out on the road on his motorcycle.

Consoer said he believes that the new owners of his building will continue with the current business and possibly keep expanding and improving.

Consoer said he plans to keep his business open until there is a done deal with new buyers.

According to Rutz, the potential new owners could own the building by the end of the year.

The now empty Vault lot, which encompasses the southern one-third of the vacated space, located at 329 N River and owned by Greg Gunwall, has been for sale with an asking price of $94,999.

According to listing agent Resa Rutz of Century 21 Stevens and Associates, the property is currently under contract and is expected to close by the end of this year.

The 3,696 square foot RCMC-owned building sits on a 0.52-acre lot across from the Hot Springs High School.

The building has two entrances (with the second address of 145 N 15th St), and is a “mirrored-unit,” meaning that the two clinics/offices spaces look the same on each side, but with a wall in the middle.

According to listing agent Edward A. Dreyer of RE/MAX Advantage of Rapid City, the building is currently under contract and is expected to close sometime in the early part of next year. No other details could be given at this time.

According to Rapid City-based South Dakota Properties, the Hot Springs Dairy Queen at 901 Jensen Highway was listed for sale as of Dec. 9. Owned by the Brixius family of Hot Springs, the current asking price is $2.3 million.

The former Mike’s Place gas and convenience store located at 1645 University is for sale with an asking price of $110,000. The commercial building is owned by Sean and Lori Wieseler and listed by Century 21 Stevens and Associates.

The property located just north of Hot Springs at 27024 Highway 385, which is currently being leased by Boar Wheel Company, is for sale and is listed by Cathy Sotherland of the Real Estate Group. The current asking price is $530,000. The owner of the property is based in California.

Located just outside the city limits at 12932 Badger Clark Road is the Blessings Warehouse, which is for sale with an asking price of $425,000. The 2.5-acre lot includes the warehouse that is currently being utilized as storage units as well as a tenant-occupied mobile home. The property is listed for sale by Resa Rutz of Century 21 Stevens and Associates.

The Office Bar & Grill located at 432 W 4th St in Oelrichs is for sale with an asking price of $230,000. The property is listed by Mt. Rushmore Properties and Homes.