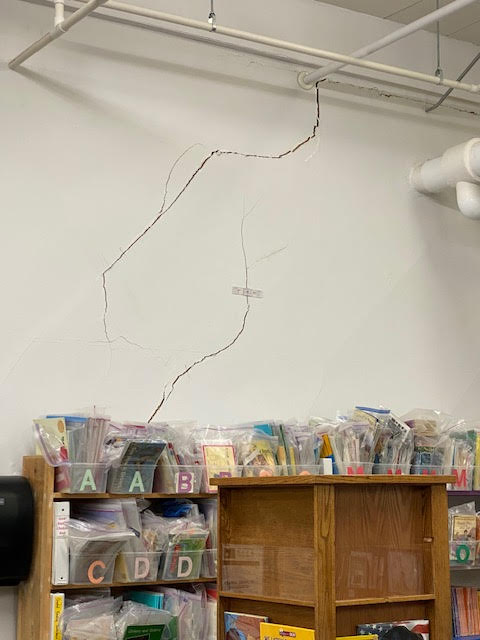 This photo taken inside the Edgemont School Library shows some of the current wall damage that is visible inside the school. According to Superitendent Amy Ferley, a structural engineer has looked at this and the building is not unsafe and parents should not be concerned for the safety of their childen.

EDGEMONT – On Saturday, Dec. 11, the Edgemont School Board convened in a special session to discuss how to proceed with the effort to address issues of deterioration that have come about over time with school buildings that are in some cases more than 85 years old.

The first issue addressed was heating and cooling in the armory, which has boilers that are very old.

“When the most recent HVAC was installed in the main building, it was with the intent to eventually extend that system to heat and cool the three armory classrooms and the lunchroom,” said Ferley. “However, there are obstacles to getting it piped to the other building. We will continue to pursue more information about the most cost-effective way to update the heating and possibly cooling for the gym, locker rooms, three classrooms, lunchroom, and shop classroom. We would like to update the HVAC for the entire armory building, if possible, and not just the portion that was originally planned on. The use of the space has changed since that original plan.”

Issues pertaining to drainage and soils are impacting building floors and foundations according to FMG Engineering, which evaluated drainage of the school lot by conducting soil borings around the school building in order to make a recommendation for a drainage project. Ferley said the firm’s conclusion was that the school needed to complete a drainage project to reroute the drainage from the south and west around the building foundation. The FMG report also offered suggestions for foundation work on school buildings. According to the report, expansive clay soils result in ground movement, which causes foundations to settle and floors to heave. Settling has led to cracks in the walls and sloping of floors.

Another topic was window replacement, as those currently in place are ineffective at keeping out moisture and air. The point was made that the age and ineffectiveness of heating systems compounded the issue of drafty windows in the Armory building.

The board is awaiting input from two other firms that will provide further guidance. It anticipates a structural evaluation from Albertson Engineers, which will consider the condition of the buildings as well as information from the monitors that are tracking the movement of the cracks in the walls. The board also discussed the drawings and information that Architecture Incorporated has shared for the design of a potential new school building.

Overall, the board agreed that the school district would need to be methodical and responsible in deciding how best to update and improve buildings. Several board members were in agreement that with the current state of the economy and inflation, that timing couldn’t be worse for finding the means to address the school’s needs. They would like more information in the form of a feasibility study to evaluate current building accessibility, as well as the mechanical, electrical, and plumbing systems.

In the coming year, the school board will be forming a committee with community members included to look at all the information available and the recommendations from the feasibility studies to decide the next steps to take in order to address building needs. Anyone who is interested in serving on this committee, please contact Amy Ferley in the school office at 605-662-7254.