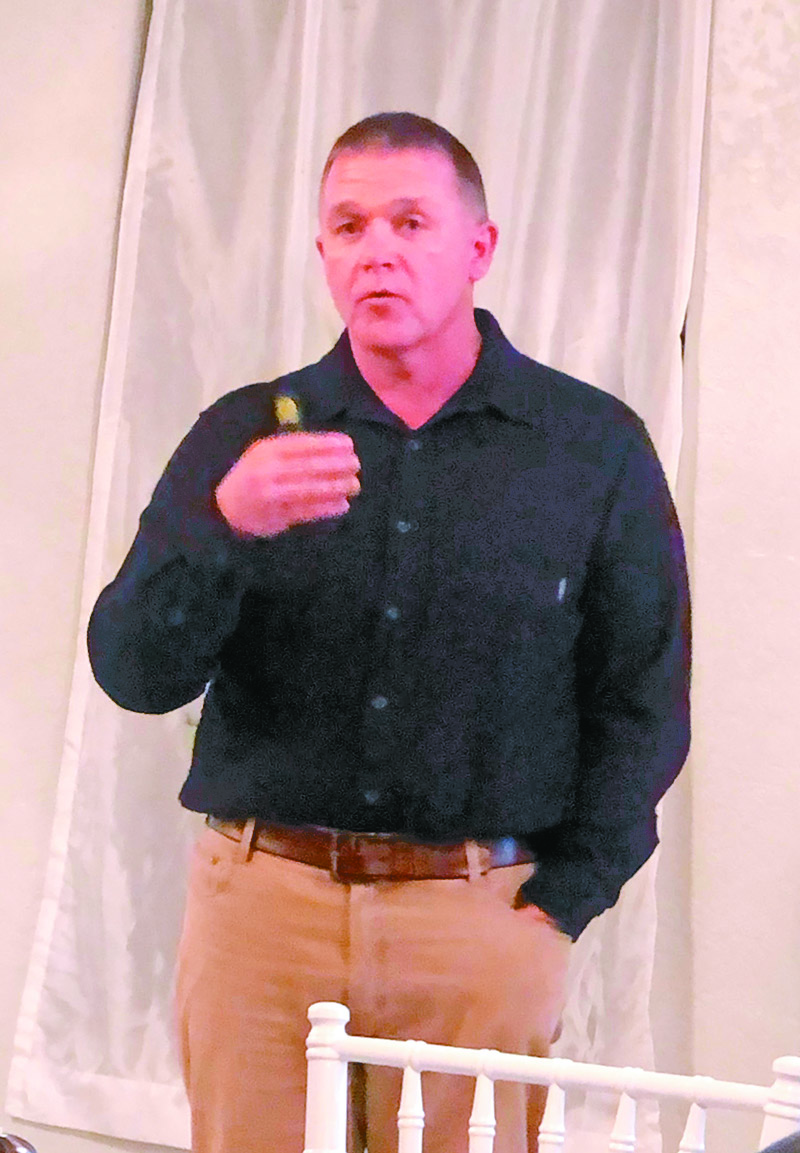 HOT SPRINGS ¬– Formed in 2006, the Keep Hot Springs Beautiful mission, according to President Beth Spitzer, “is to stimulate community pride and increase individual responsibility in beautification and litter reduction through environmental education and programs.”

At their annual banquet, held this past Saturday, Nov. 6, the group hosted Rich Zacher, Custer Area Engineer with the South Dakota Department of Transportation, to address the group regarding the US 18 and US 385 Reconstruction project.

According to Zacher, bid letting was held earlier in the week on Nov. 3 with the accepted bid (approximately $8 million above the anticipated cost of $23 million) to go before the City Council next week on Nov. 15, and the final acceptance through the Department of Transportation Commission on Nov. 23.

Zacher assured the group that the plan allows the contractor to work different segments at the same time, thereby cutting down wait times for each entity such as water and sewer, which will also be making improvements of their utilities along the construction route. He however did say, “I wish I could tell you that you wouldn’t even know we were here, that we will be in and out but it will be as awful as you anticipate.”

According to Zacher, a typical construction phasing of this size has a three-year completion yet due to the aforementioned work plan, the phasing will be two years with the ground breaking in the Spring of 2022 with an anticipated completion by December 2023.

The construction will cause delays in traffic from the area by Taco Johns and Big Bats to Summerville Street on Wind Cave/385, with an anticipated one-way signal between Mornin’ Sunshine and end just past the Braun, due to the confines of the existing road width.

While Chicago Street is to see the least amount of changes, there was some concern to the creation of a sewer drain, as the sidewalk on the westside of North Chicago is actually a box culvert. As Zacher pointed out, there is a real possibility that the wall of that box culvert may actually be the exterior wall of some of the basements along the route. This potential was taken in to consideration and the possible affected area will not be removed when the 60-inch round storm sewer is put in place.

Zacher also said that the former Dale’s Family Restaurant, at the corner of Wind Cave/ 385 and River Street was purchased and will be torn down to deal with “complications of that intersection.”

Green pods will be placed along the reconstructed route with a guarantee from KHSB to maintain those pods.

Larger ‘green’ areas to be maintained by KHSB have been created along the route, saving the city approximately $65,000 in concrete costs. Yet these added areas are much larger than pods and will create a strain on the KHSB budget and volunteer staff. According to Spitzer, KHSB is still in discussions with the city on the breakdown of costs and responsible parties for the initial work and maintenance of that area.

When asked what the impetus was for this project, Zacher explained that the roads had “exceeded its life; it is in bad condition” also mentioning the need for water and sewer repairs.

Spitzer, a Hot Springs resident since childhood, is passionate about the town and its beauty. “I have a desire to make this place I call home an attractive place to live.  I believe strongly that we should leave things better than we found them.”

While Spitzer admits there will be some negative issues during construction she said, “I choose not to focus on that though because it will only be temporary.  I have great hope and anticipation for what Hot Springs will come out with on the other end of the project.  I am very excited about the suspended walkway on River Street and for the improved road, sidewalks, and pod planting areas that everyone will be able to enjoy.”

Community members interested in learning more about Keep Hot Springs Beautiful are invited to attend one of their monthly meetings held on the 2nd Tuesday of the month at 6:30 PM at Bethesda Lutheran Church in Hot Springs or visit their website at KeepHotSpringsBeautiful.org.