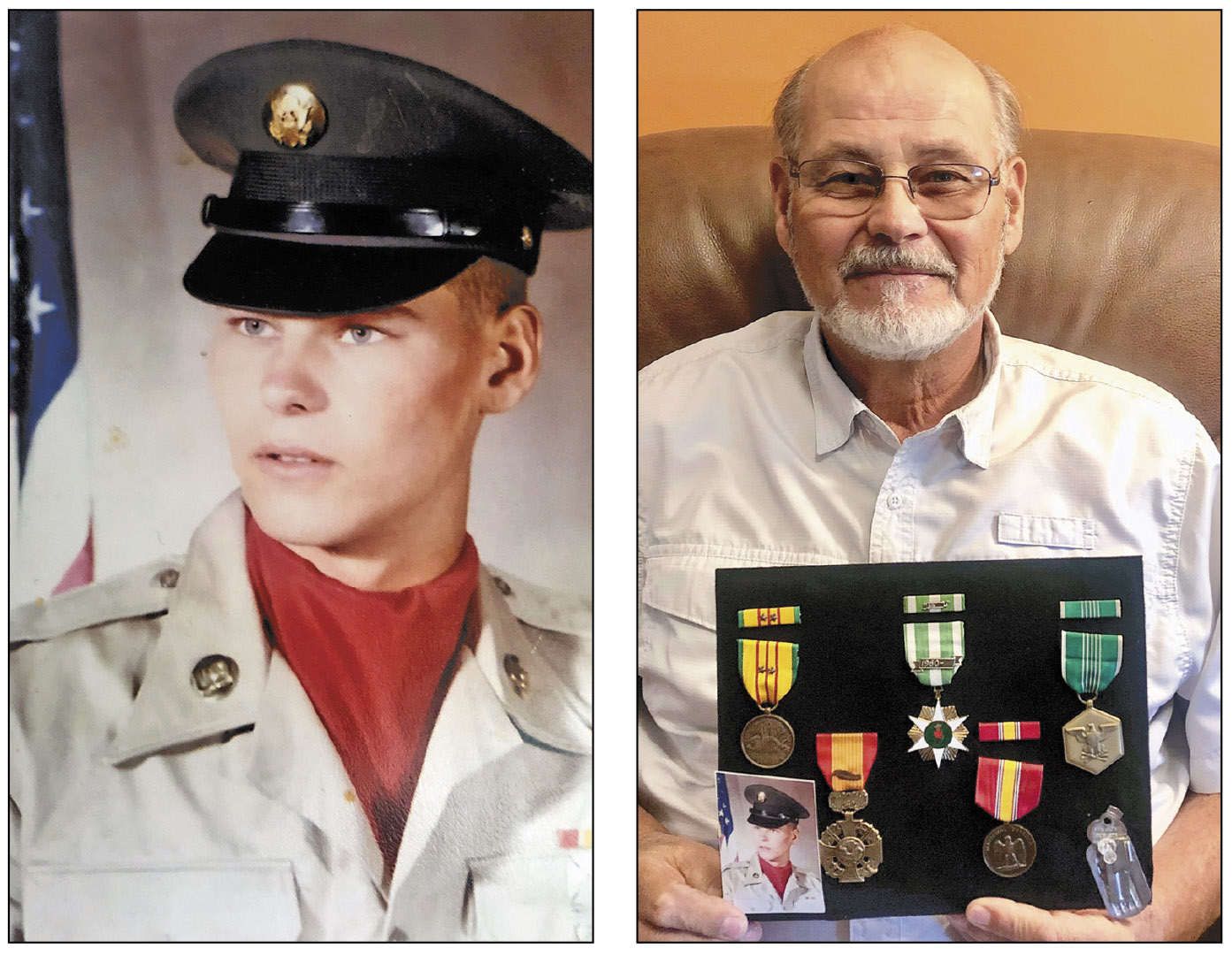 HOT SPRINGS –  Steve Overby, now a resident of Hot Springs, was born in Clear Lake, S.D., in 1950, and was the first of four children to a farming family; a way of life he loved.

Yet in 1959, the family moved to Rapid City and put down ‘city’ roots.

After graduating from high school, Overby worked as a carpenter and welder and enjoyed living life on the edge, until he received his U.S. Army draft notice early in 1970.

“At that time in my life, I felt it was the only meaningful thing I was going to do, I was actually looking forward to having a sense of purpose,” he recalled.

Basic training was at Fort Lewis, Wash., where he learned quickly it wasn’t all hard work as “one of the guys would sneak into town and come back with beer that we stashed under an old WWII barracks. Come Saturday we would get pretty tuned up,” he laughed at the memory.

Next up, combat engineer training at Fort Leonard Wood, Mo., “I am sure they were training us for Vietnam, what with that humidity there.”

Most in his company felt they were heading to Vietnam “which created a kind of a rift in the company because there was a lot of National Guard, NG, training with us too. We used to call them Nixon’s Girls. They joined the guard so they could get out of going to Nam. So when we got our orders for deployment, a lot of them just went back to where they came from while we prepared for war.”

Overby was with the 4th engineers attached to the 4th infantry headed to Ahn Khe when he was deployed in September 1970. “It was hard on my mom when I left for Vietnam.”

“Only a day in and we received a mortar attack,” said Overby. “I grabbed my mattress

off the bunk and rolled onto the floor and between mortar rounds I ran into the bunker. I expected it, it was in part of our training, you’re scared but you still have to function.”

“My first job as a combat engineer at Ahn Khe was not glorious,” laughed Overby, “we built prefab outhouses.”

After one month he was transferred near the DMZ (demilitarized zone) to Quang Tri with the 7th engineer battalion, 1st brigade, 5th mechanized infantry and sent to Firebase C2 for mine sweeps from the Firebase to the village of Cam Lo.

“My job was to sweep for mines outside of the base, some were Russian plastic mines. The

Papasan would bury them at night and then in the morning we would do our sweeps it was easier to see where the earth had been disturbed. But then some officers wanted to look at the mines so we had to dig some up. That was stupid. Sometimes they would put what we called ‘Mouse traps’ under the mines and if we tried to lift the mines the ignition device would set them off. All this so the officers could look at them out of curiosity, nothing more, just curiosity.”

Overby would soon find himself in the middle of Operation Lam Son 719.

This operation had begun its early formation due to a request from the Joint Chiefs of Staff in December 1970 discussing the possibility of an ARVN (Army of the Republic of Vietnam) cross border attack into Southern Laos utilizing the abandoned Khe Sanh airbase as a supply and assault center. By January 7, 1971 detailed planning was in progress for an attack against PAVN (People’s Army of Vietnam) Base Area 604 near Tchepone and Base Area 611 near Mung Nong. However, many units did not know of their pending involvement until just days before the engagement.

Overby was part of a massive helicopter assault into the Khe Sanh airstrip during the early days of Operation Lam Son 719. “There were over a hundred Hueys staging to come pick us up. It looked like a snake in the sky. We were on the 17th Huey into Khe Sanh. Our job was to clear a path through the old Marine mine fields.”

With a mass of unexploded ordinances and land mines to deal with as well as poor weather the job was challenging. One day “me and ‘Hillbilly’ were probing for mines and I was behind him with my M16, I can still remember the infantry were lined up behind us on the airstrip, a whole line of them waiting to see if we were gonna get blown up. While we were probing the mine field and F-4 Phantoms were dropping napalm about a mile out in front of us.”

“My first day at Khe Sanh some guys got trapped one guy stepped off the path and stepped on a mine; I could see their bodies flip above the buffalo grass.”

For more than a week the company lived in foxholes, with no access to washing and increasingly cold temperatures at night.

When equipment finally got to Khe Sanh he was finally able to enjoy comforts such as a cot and sleeping bag.

Overby always carried C4, blasting caps, det cord and ammo in his ruck. Causing him to be popular with the “grunts” as they were known to use C4 to cook with. His rucksack was so heavy he had to put it on lying down then roll over and stand up.

While food was mainly K rations, some soldiers became creative.

“Once, in the bush we’d shot a pig and killed it, got a hot meal out of it, roasted it on the RPG screen.” They also caught a Cobra and tanned its hide.

Items from K-rations such as sugar and creamer would often be saved to trade with the South Vietnamese for their rations of sweet rice and pecan nut rolls.

“The whole time in Khe Sanh, we were all non coms, not an officer among us. One day a 1st Lieutenant from the 3rd company comes in and tells us to get our hair cut and polish our boots. Well, our dog Blue walks up to him and proceeded to lift his leg. We didn’t get our hair cut and he choppered back to base camp.”

“We spent near three months out there.”

“When we were finally pulled out of Khe Sanh, we were ordered to take a route back to Quang Tri starting at Jewel City, routing by the rock pile, through ambush alley and by Dong Ha.” During this route they were engaged by the enemy 4 times in 6 days.

“One M60 tank track blew off, a road grader hit a mine, we took small arms fire and our Cat  dozer was hit by an RPG attack; they blew the dozer up. Cobra’s came and lit up the area. Only two casualties, we were very lucky. We found out later we were used as a decoy as the main units were sent on another road.”

“I quit writing letters after Khe Sanh, I was getting in a bad way; getting depressed. My family would send packages but they never got to me, the army had lost track of me. Now life was just a matter of survival.”

“My next duty station I was with the 26th engineers attached to 26th infantry down in Chu Lai. My job was to drive a 5 ton dump truck filled with soil backwards pressure testing the roads for mines. I would straddle the steering wheel and drive it backwards. I guess they figured if I did hit a mine I wouldn’t get hurt too bad.”

“At my 4th duty station that I was going to be assigned to the clerk looked at me and told me I could have gone home 3 or 4 months ago. I said, “you’d better send me home”. I was lost, the Army literally lost me.”

“I never had a fear of not coming out of it, maybe because of my age, but something always told me ‘you’re going to be alright’ I had so many close scrapes.”

Going home didn’t seem real. After 14 months in country it took awhile to sink in.

“When I came home I had a hard time adapting,” said Overby. “I was discharged November 17, 1971. I came home without my uniform, I was pretty distraught. I could have been a better soldier.”

Still not old enough to drink alcohol legally, he would “put on a stack of records so I would have some noise all night in the background” to help him rest.

Overby found himself a career in the mining industry, not land mines but coal mines, operating heavy equipment.

Now retired he enjoys fishing with his greatest joy in life, seeing his sons grow into the men they have become. “They are really great men.”