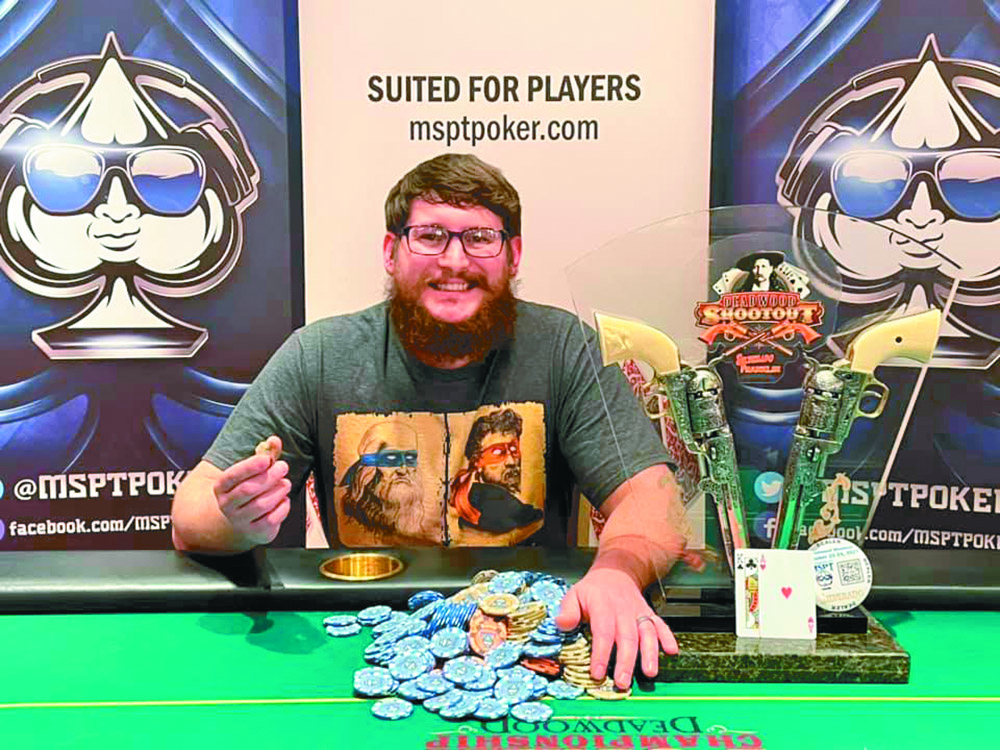 Mark Steffen, Jr., of Hot Springs holds up the Fairburn Agate given to him by his late father as he poses for the camera following his $82,256 pay day by winning the Mid-State’s Poker Tour Deadwood Shootout at the Silverado Franklin Hotel and Casino on Oct. 24.

HOT SPRINGS – It’s been nearly a year-and-a-half since 34-year-old Mark Steffen, Jr., of Hot Springs lost his father, Mark, Sr., to cancer, at the age of 59.

Last Sunday, Oct. 24, in Deadwood, during the Mid-States Poker Tour Deadwood Shootout at the Silverado Franklin Hotel and Casino, Mark said his dad was looking over his shoulder throughout the three day affair, which he went on to win and take home a total purse of $82,256 – by far the largest payout he has ever received in a no-limit, hold’em tournament.

Wiping the tears from his eyes as he held up the Fairburn Agate his dad had given him, Mark Jr. proudly smiled for photos at the conclusion of the tournament with a pile of chips in front of him and the large, twin pistol trophy next to him.

“Yeah, my Dad was definitely with me,” Mark said later in the week following his win, as he recalled the many games of cards he had played with his dad over the years.

Mark, Jr., who works at Lynn’s Dakotamart in Hot Springs, said he’s been playing hold’em tournaments in various venues for many years, and got his start at the Hot Springs VFW about 10 years ago with small $22 buy-ins with a portion of that going to a charity. For five years after that, he lived in Fargo, N.D., where he got more serious and began playing in the Dakotas Poker Tour.

After moving back to Hot Springs in 2015, he and one of his friends in North Dakota began playing in the Mid-States Poker Tour (MSPT), which according to their website, is now in its 12th year and hosts more than 30 events per year across the country, including some in Las Vegas. Their larger main events, like the Deadwood Shoot-Out held last weekend in Deadwood, include a $1,100 buy-in, but some smaller regional events can be made with a $350 or $360 buy-in. To date, the MSPT has awarded nearly $130 million in their deepstack, no-limit, hold’em tournaments.

Last weekend’s Deadwood Shoot-Out Main Event was only the seventh MSPT event Steffen has participated in, and only the second one in Deadwood. He has won money only two other times, placing seventh at a regional event in Sioux Falls at the Grand Falls Casino in 2017 and earning $3,966, and then placing 36th at the same casino in 2018 and winning $729.

According to the MSPT website, a total of 387 people began play on Day One in last month’s Deadwood Shoot-Out, with only 53 of those surviving to play on Day Two, with 45 of those getting paid.

Nine players, including Steffen, qualified for the final table on Sunday, with only two of those players ever having reached a MSPT Main Event final table before – popular Deadwood poker player Rosie Paules of Torrington, Wyo., with $67,562 career MSPT earnings, and William Reynolds, of Sioux City, Iowa, with $52,075 career MSPT earnings, but whom Steffen said has won nearly $2 million in other poker tournaments around the United States.

After all of the other newbies saw their stacks depleted, Steffen remained as the sole final table newcomer and faced-off against Paules and Reynolds in the final three.

Steffen said his biggest break in the tournament was taking out Reynolds first, which he did by first being dealt a suited 5 and 4 of Hearts, which set up a flush draw for himself.

Reynolds raised small after seeing his two cards, which prompted Steffen to think to himself, “I have not made a move on him all day,” so Steffen pushed all-in.

Reynolds then “snapped top pair” onto the table, which made Steffen think he may have made a mistake. However, when the flop showed all hearts, it gave Steffen the win with a flush and sent Reynolds out the door.

Taking out the more aggressive player Reynolds gave Steffen a lot of confidence in his head-to-head face-off against Paules, despite the fact she had a number of fans in the room, who were all chanting her name.

After about 35 minutes in head-to-head play, Steffen emerged the winner and took home $82,256 cash.

With the big payout, Steffen said many people have asked him why he still came to work the next day at Lynn’s Dakotamart. He however laughs at that comment, and says, “I need the insurance!” as he explained how his wife Whitney and himself are expecting their first baby due on May 22, 2022.

He did however explain how he is utilizing his winnings, which included paying off a $1,500 car loan, eliminating all of his high-interest credit cards, investing a few thousand with Edward Jones, investing the same amount in cryptocurrency, reimbursing his friend who helped him with previous tournament buy-ins and holding back $20,000 for Uncle Sam’s income tax.

He said he also set aside $20,000 for his own future poker endeavors, which may include the next MSPT Main Event at Canterbury Park in Shakopee, Minn., where he can try to defend his title at an event which has a guaranteed $300,000 payout – three-times the guarantee as the recent Deadwood Shootout Main Event.

Steffen said that he has no plans to ‘quit his day job’ anytime soon, and added that he decided a long time ago that in order to take on poker as a professional endeavor, he would need at least $150,000 in his poker fund.