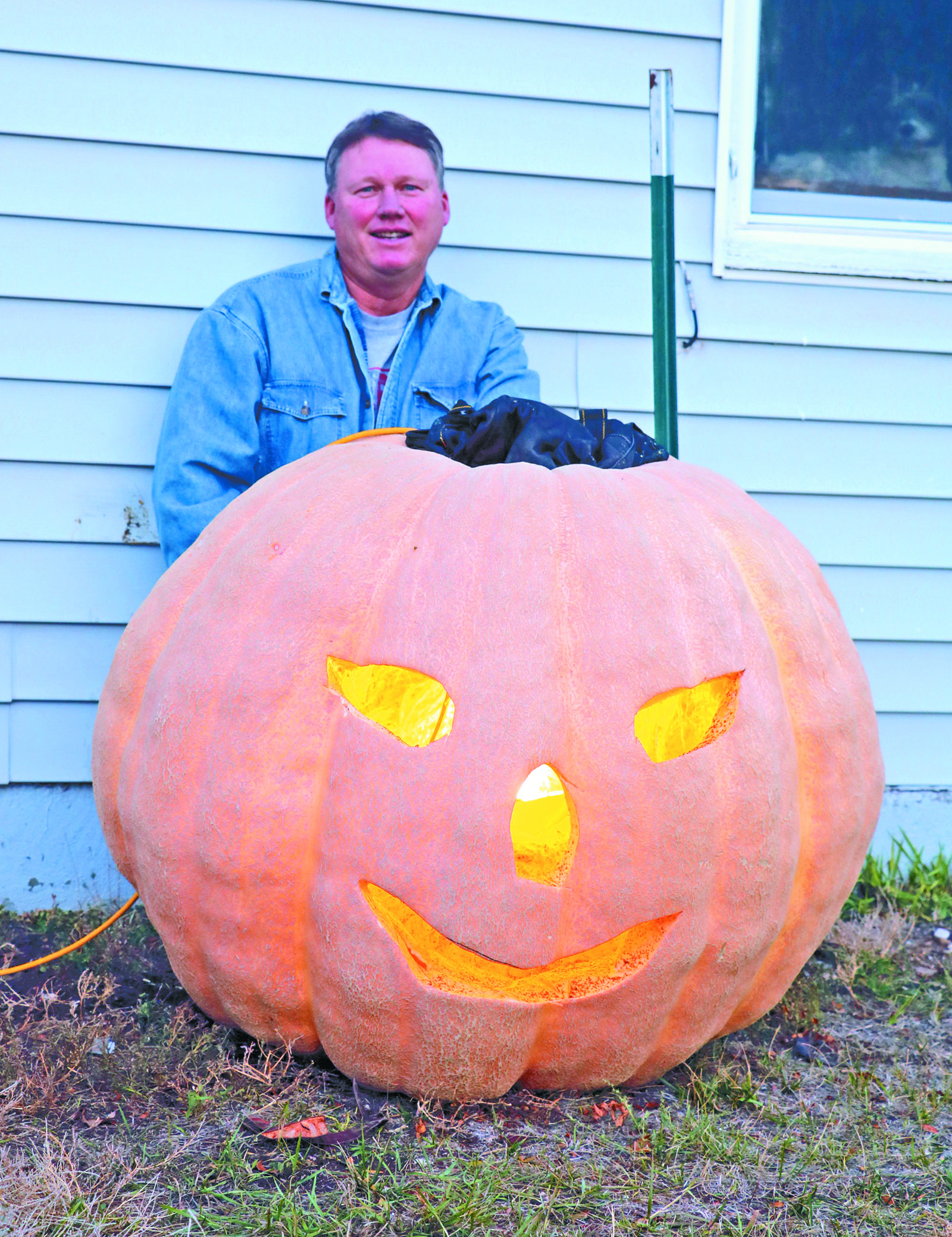 A couple days prior to Halloween this past Sunday, Kelly Silvernail kneels behind the 700 pound pumpkin her grew in his backyard, located just off University Avenue at 110 S. 18th Street in Hot Springs.

HOT SPRINGS – Growing big pumpkins is an addictive hobby that local grower Kelly Silvernail is proud to help anyone get into.

He has been a part of the hobby for quite a few years, and this year, successfully grew his biggest one to date, which weighed in at a whopping 700 pounds.

The process for him this year started back in April when he took the seed from a friend’s big pumpkin from the previous season and began growing it in a starter pot inside his Hot Springs home. Once temperatures outside began to warmup in May, he took his six-inch tall plant outside to his backyard garden where it would take hold for the rest of the growing season.

As it began to grow and create blossoms, Silvernail said he selected a flower about three-quarters the way out on the main vine as his pumpkin. He then picked off all of the other “female” blossoms so that all of the plant’s energy could be focused on that one pumpkin. With each new vine produced from the plant, it was a daily process to take those vines and bury them in the soil in order to expand the underground root system and provide more fuel to growing the big pumpkin.

To ensure that bees did not pollinate his plant with the pollen of a neighbor’s pumpkin plant from “lesser bloodlines,” so to speak, he covered the flower on his plant and then pollinated it himself using a Q-tip by transferring the pollen grains manually from the male part (anther) of one of his own plant’s flowers to the female part (stigma) of his selected flower. This took place in late July.

Silvernail said it’s easy to tell the difference between a male and female flower as the female has a bulb underneath the blossom where the fruit will grow.

With the help of chicken poop and eggs from his own chicken coop as fertilizer, the pumpkin plant grew rapidly the rest of the summer and eventually expanded to fill a 30-foot x 30-foot wide and 3-foot tall space and nearly encompass his entire backyard. As the plant expanded over the next two months (August and September), Silvernail’s pumpkin was growing at a rate of 30 to 40 pounds per day – an expansion that was nearly visible to see with the naked eye.

Knowing that the fall’s first frost was about to hit Fall River County, Silvernail cut the pumpkin off the vine on October 1.

To get it ready for Halloween, Silvernail said he carved it up himself around Oct. 15 in order to have time to dry out the seeds. He and his wife Julie own and operate the Victory Steakhouse & Lounge in Edgemont and hosted a Halloween Party on Saturday, Oct. 30, where they gave away the seeds for others to try their hand at trying to grow big pumpkins of their own next season.

Silvernail said the inside of the pumpkin was surprisingly mostly hollow and had only about 300 seeds, which are only slightly bigger than your typical pumpkin seed. What gives the pumpkin most of its weight is its thick walls, which were up to seven inches wide in some places, he said.

While growing a 700 pumpkin was quite a feat for Silvernail this year, he said he’s looking forward to growing much bigger, as he has friends in the hobby now who are growing 1,000-pounders and enter a contest in Rapid City each year in late September. He hopes his love of growing big pumpkins inspires others in Fall River County to do so as well, so that perhaps a local ‘big pumpkin contest’ could be held in Hot Springs or Edgemont next year.

Earlier this fall, on Oct. 2 at the Great South Dakota Pumpkin Weigh-Off in Canton, a new South Dakota state record was set when 65-year-old Greg Kurkowski of Watertown grew a pumpkin he nicknamed “Spot” that tipped the scales at 1,823 pounds. The previous record was set in 2010 and weighed 1,674 pounds.