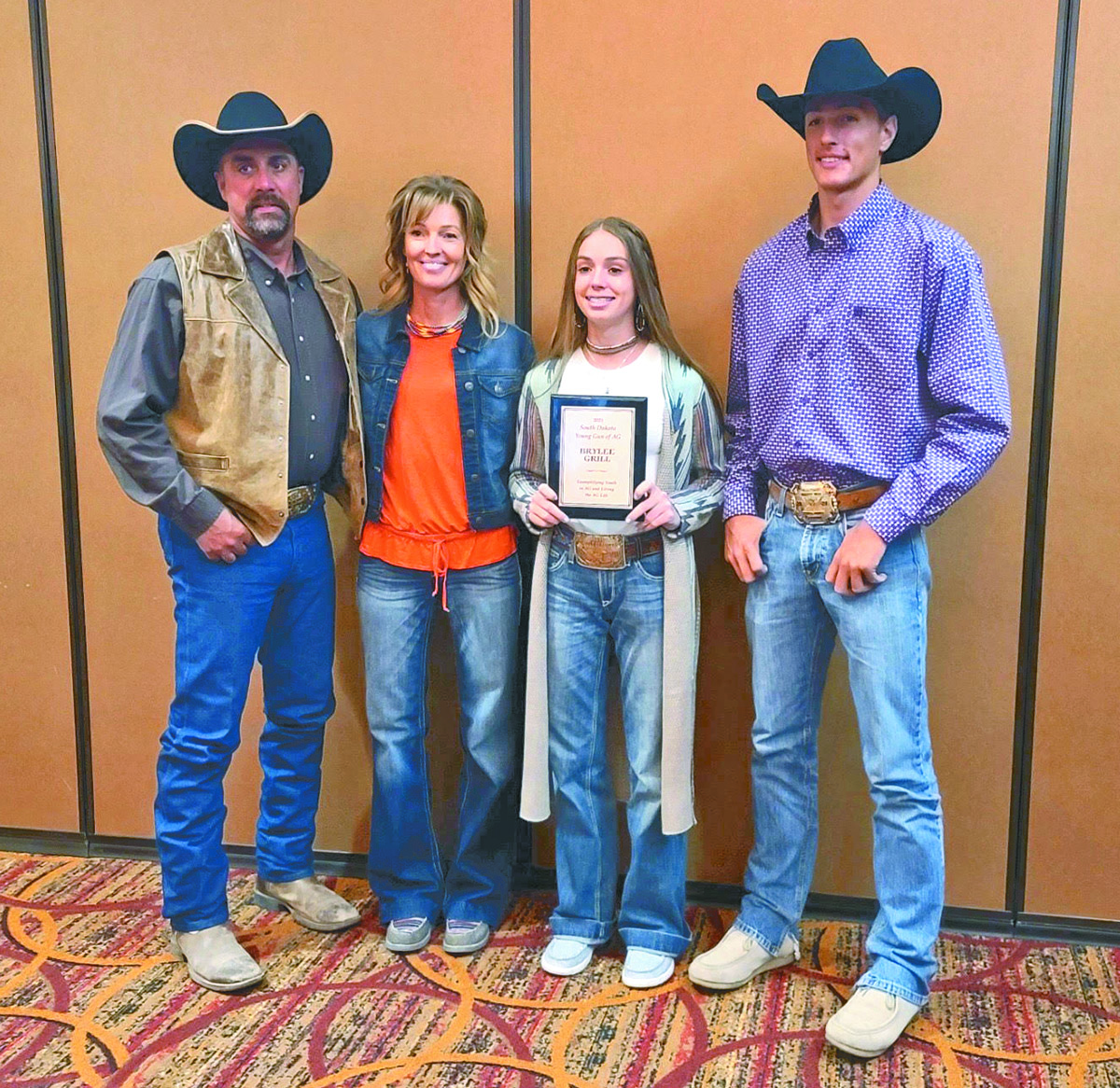 Fifteen-year-old Brylee Grill of Hot Springs poses with her family after being presented the “Young Gun of Ag” at the South Dakota Women in Agriculture conference in Deadwood last month. Also pictured are her parents Brad and Trixie and older brother Braden.

DEADWOOD – Brylee Grill of Hot Springs was recently awarded the “Young Gun of Ag” by the South Dakota Women In Agriculture (SDWIA) at their 2021 conference in Deadwood last month.

According to information released by the SDWIA, Grill, age 15 and a freshman at Hot Springs High School exemplifies Youth in Agriculture everyday while living and ranching with her family on the B Lazy T Ranch outside of Hot Springs, where they raise and sell registered red angus bulls. Brylee works alongside her family, which includes parents Brad and Trixie Grill and her older brother Braden.

Last year, Brylee was the recipient of a similar award from M&M Cattle Services of Oelrichs, when she was named the company’s Ag Youth of the Year. Owner Megan Harkless said she was incredibly impressed with Brylee’s involvement in her family’s ranch in all aspects. From doing daily chores and helping with calving to assisting with artificial insemination, she is always helping, involved and knowledgeable about it. Harkless also mentioned that when it comes to calving time, you won’t ever find her inside.

“I nominated Brylee for this award as her love for agricultural absolutely shines off her,” Harkless said. “She is not only a great role model, to not only young but old to, she is a great example of what agricultural stands for.”

SDWIA Awards Chair Amy Pravecek said Brylee lets her love and passion for agriculture shine through in everything she does. “Whether that be educating fellow classmates on where their food come from and what it takes to get there, to giving presentations for 4-H Youth in Action Public Speaking on the Methods and Facts of Pregnancy Checking Cattle.”

Brylee plans on doing something in the large animal services area in her future. Her aspirations have been influenced by Harkless’s AI work through M&M Cattle Services, and the veterinarians at Cheyenne River Animal Hospital in Edgemont. “Someday, she might be providing services as a large animal veterinarian in rural South Dakota,” Pravecek said.

Her mom Trixie highlighted Brylee’s zest for life and how she wants to do everything, no matter how hot or cold or wet or dirty it is; she wants in. She said Brylee is always moving and working hard.

Brylee is an active member of FFA and 4-H where she shows beef cattle and pigs. This year marked the fourth year in a row that she won Champion heifer calf at the Fall River 4-H Achievement Days in Edgemont. She has also won Reserve Champion hog, only being beaten by her older brother Braden. Brylee is also active in sports at her high school, including volleyball and basketball.

“On behalf of the SDWIA board, we couldn’t be more please to preset Brylee with this honor,” Pravecek said prior to presenting Grill with the award. “The future of Ag looks bright with Brylee in it. Thank you for exemplifying all you do as a young gun of agriculture.”