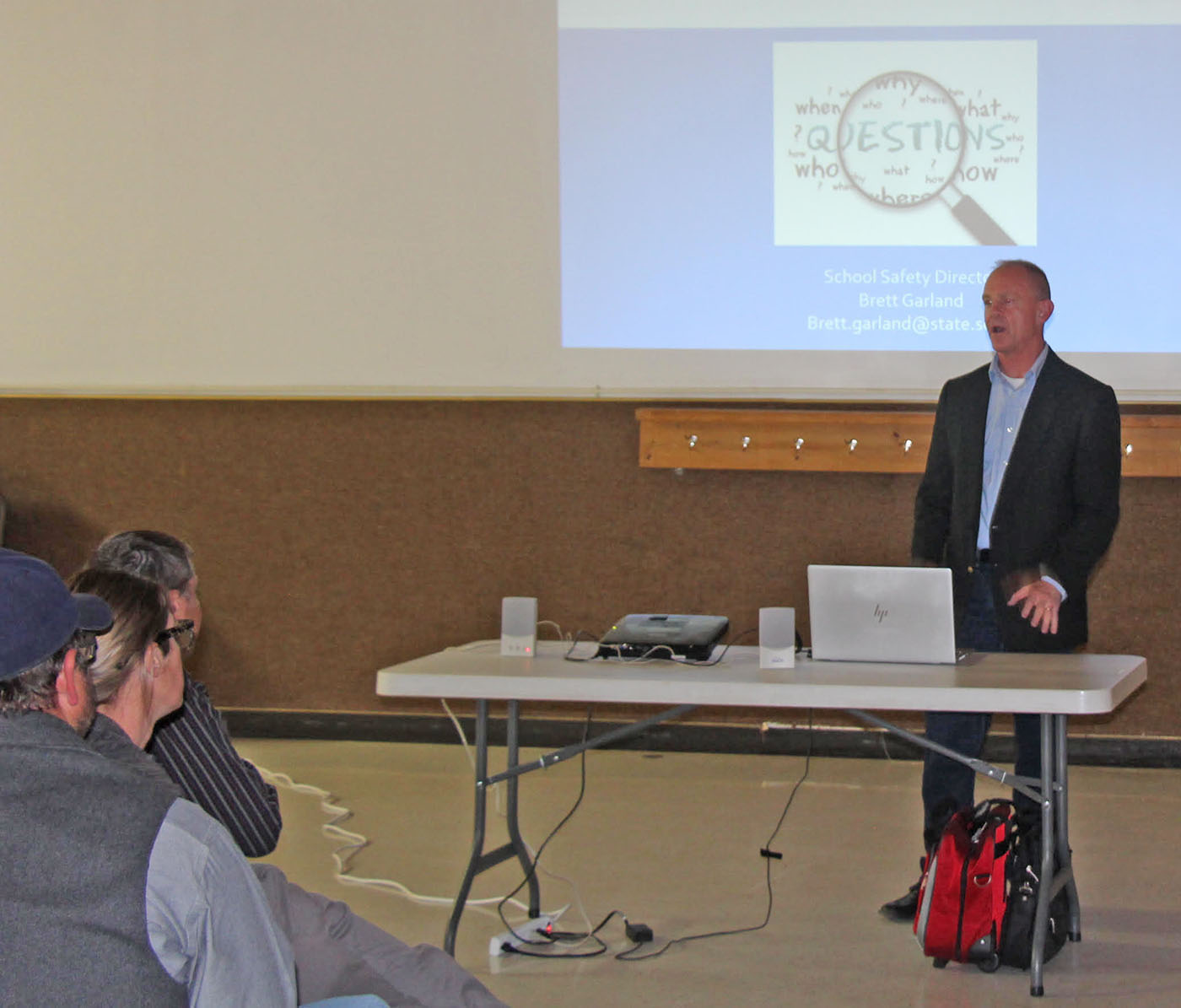 Brett Garland, Director of the South Dakota School Safety Program in the South Dakota Department of Public Safety was at Edgemont School to deliver a presentation on internet safety to parents with children enrolled at the school.

EDGEMONT – On Monday October 25, Brett Garland, Director of the South Dakota School Safety Program in the South Dakota Department of Public Safety, was at Edgemont School to deliver a presentation to parents on internet safety issues and the importance of monitoring online interactions between their children and others, both those they are familiar with, as well as strangers.

Garland began by pointing out the challenges that confront all teenagers. They are faced with changing hormone levels and developing brains that give them the ability and opportunity to make huge mistakes, which means that really smart kids can make some very poor decisions. Garland insisted that for obvious reasons, no one wouldn’t leave a 2-year old or 4-year old home alone and said it was analogous to giving a teenager an electronic communication device and failing to monitor their activity.

Any number of things in the life of a teenage student have an online component, as Garland pointed out. Communication, homework, gaming, social media, research, hobbies were some of those mentioned. With so much of their focus centered on electronic activity, Garland noted that most kids in the present day don’t participate as much in traditional dating or hanging out with friends. Many overindulge when it comes to digital devices, leading behavioral experts to coin the term ‘digital heroin’.

Since the beginning of the COVID pandemic, kids have been spending more time online, which opens them up to more solicitation, bullying, and exposure to inappropriate material. Garland pointed out that access to pornography is as easy as the touch of a finger, and that a child’s ‘digital footprint’ or the collective amount of online exposure they have through social media, texting, photos and blogs is in most cases larger than that of their parents.

In many instances, those who come to view online postings such as digital photos or social media posts aren’t those that children and teens intended them for. Revealing images can get lost or misplaced, and in the worst case can eventually fall into hands of those looking to exploit or abuse juvenile posters. Online predators posing as teenage peers are sometimes successful by persuasion or manipulation to get their targets to submit nude or revealing photos and afterwards further manipulate them by threatening to expose their photos to friends and family. Another example that many would not expect is that prospective employers or academic institutions considering someone for a job or admission as a student may search online to see what can be learned from someone’s posting history, often going back many years, such that something posted as far back as a decade or more can impact that person far into the future.

Snapchat, Instagram, Tik Tok, and certain dating services with high instances of child sexual exploitation, according to Garland. Many of the same sites are also where ‘cyberbullying’ takes place, which often involves one teen humiliating or mentally abusing their peers by posting embarrassing images or insulting and threatening remarks.

Oftentimes parents or teen victims want schools or law enforcement to address and manage cyberbullying, but Garland was quick to remind everyone present that those entities are limited in their capacity to impact such online behavior. He implored kids to choose to not participate or engage in such behavior and be responsible for their online actions. He also pointed out that one good approach is known as ‘emotional reasoning’, the idea that before someone does something online they should question how far into the future could the consequences be manifest – five minutes, five weeks, five months, or five years. His best example was perhaps the Hollywood actress who left on a plane flight with a job but landed at her destination without one after a social media posting that was racially-insensitive.

Garland concluded by emphasizing that parents have to be accountable for knowing about their kids online activity. They must know which apps are on their phone, how much they are online and those with whom they are interacting.