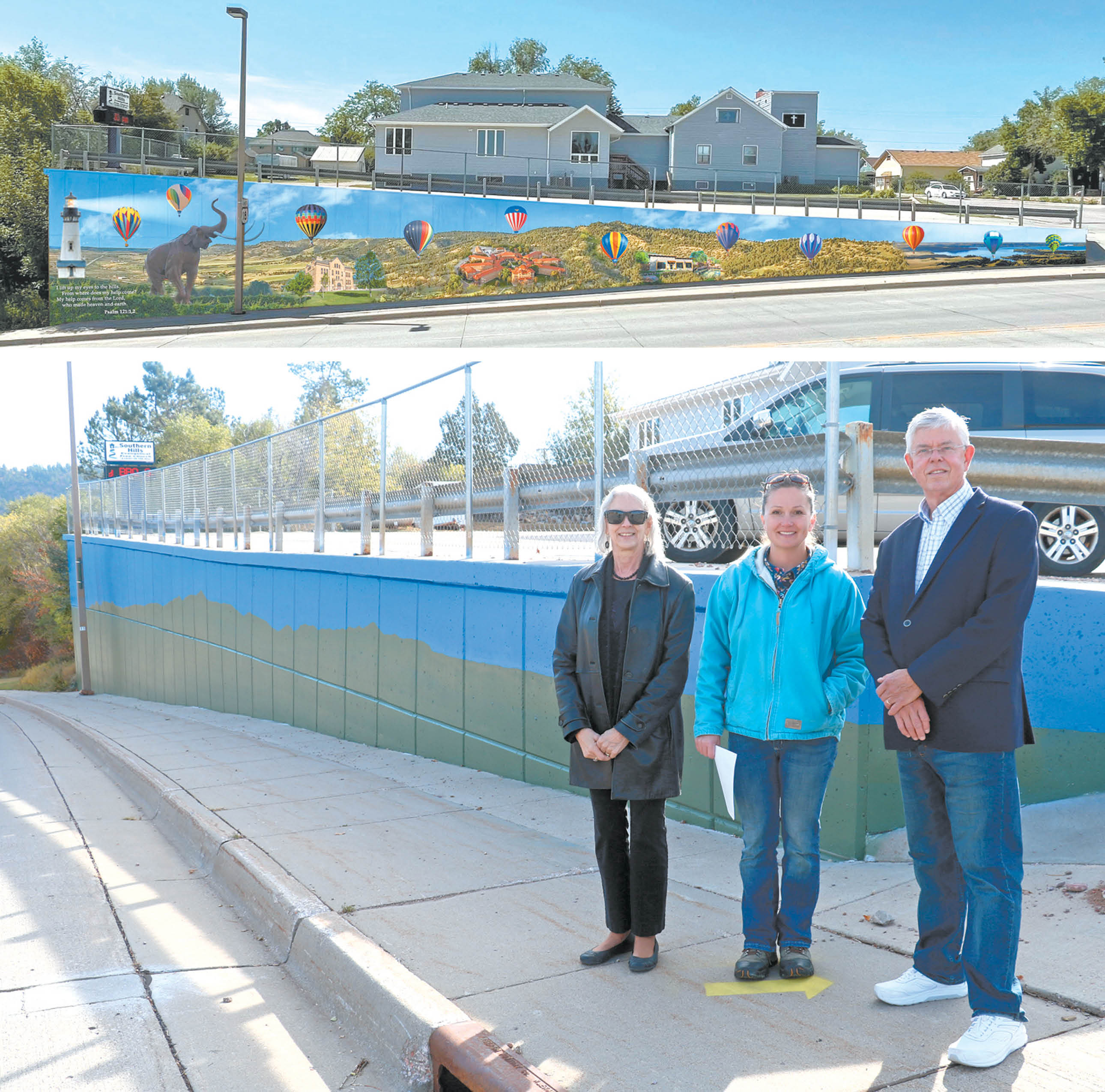 HOT SPRINGS – Progress on Hot Springs’ latest large-scale mural is moving along quite well, according to organizers Petra Wilson, with the Southern Hills Ballooning Association, and Diane Gross, with the Cultural Development Organization.

Following initial fundraising efforts earlier this summer, the two organizations were able to complete preliminary efforts on the north-facing concrete wall below the Southern Hills E-Free Church at the top of the viaduct earlier this month. The completed work included the cleaning of the wall along with primer and the base colors applied. Some additional work is planned for the fall, but the completion pf the mural will likely not be until next spring or summer, depending on weather conditions.

Once completed, this new mural will be one of the town’s largest at 125-feet wide and 16-feet tall (on the east end) and feature a Hot Springs area landscape along with all of the locally-owned hot air balloons. In addition, as part of the agreement with Southern Hills E-Free Church who owns the wall, the east end of the mural will also feature a light house and a Bible verse below it, representing the church’s mission and congregation.

Gross and Wilson each expressed their gratitude to those who helped get the initial stages of the mural completed, including 0007 Construction (Chris Kutz and Marc Gerbing) who cleaned the wall and applied the base colors. Wilson added their immense appreciation to new Hot Springs resident Brad Appleby, who is the artist responsible for creating the Photoshop mock-ups of wall art imposed on a picture from the street view, which will be the basis for the final mural.

Gross and Wilson said that there will not be one single artist who will paint their entire mural, but rather, it will be completed by a group of artists with each responsible for a certain aspect. While they have already begun working with some of the artists, Gross said a “Call For Artists” will be conducted soon, which will include specific details on how area artists can be part of the project.

Currently, in addition to 11 locally-owned hot air balloons and the aforementioned light house, the mock-up design includes a paintings of a Battle Mountain, a Columbian Mammoth, the Pioneer Museum, the VA Medical Center, Moccasin Springs and Angostura Dam.

“Once this wall is complete, we would be interested in continuing this balloon theme and other local landscapes/scenery on the opposing wall, but with visiting balloons, including the POW/MIA balloon,” Wilson said. “This wall mural project has been made possible by many volunteers who have helped with fundraisers as well as businesses such as The Mammoth Site, Moccasin Springs, and Evans Plunge, who donated items for a raffle we had this summer to help support the mural.”

For anyone who would like to make a donation toward the  mural project, please contact Petra Wilson at 605-413-7106 or e-mail at This email address is being protected from spambots. You need JavaScript enabled to view it..