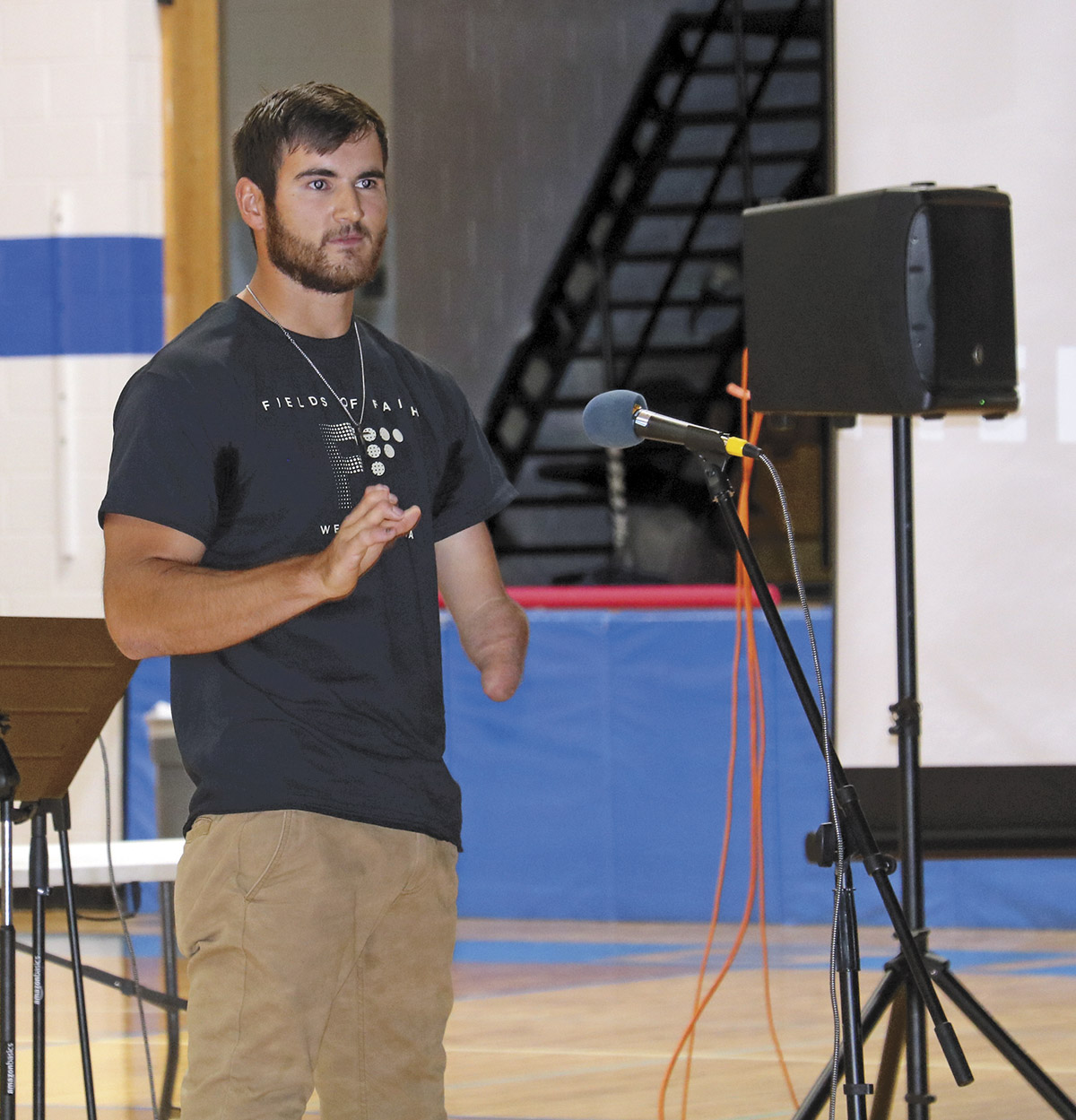 Former Chadron State College football player Michael Lamb, whose parents are John and Nancy Lamb of Hot Springs, was the featured speaker at last week’s Fields of Faith event. Lamb, 25, who was born without a left hand and no feet, told audience members how God has helped him overcome the difficulties in his life.

HOT SPRINGS – “God has a calling for each and everyone of you. You just have to believe and be patient … You may be in a rush, but God isn’t in a rush … God always has your back.”

Those were a few of the many inspiring messages shared by Michael Lamb of Denver, Colo., during the annual Hot Springs Fellowship of Christian Athletes (FCA) Fields of Faith in Case Auditorium last Wednesday night, Oct. 20. The event also included music by the worship team from the Hot Springs Wesleyan Church, along with student testimony from Hot Springs High School seniors Carl Massa and Brooke Harkless.

Lamb, 25, whose adopted parents are John and Nancy Lamb of Hot Springs, was the featured speaker and told his life’s story and how God has helped influence him, despite his physical limitations from birth defects.

Born in Russia to teenage parents in 1996, birth defects left Michael without a left hand and no feet on either of his legs. Unable to care for their newborn son, Michael’s birth parents put him into an orphanage, but two years later, he was adopted by the Lamb family, who lived in Cody, Wyo., at the time.

Growing up in Wyoming, Michael developed a love for football at a young age, which grew into aspirations to someday play in the NFL. While his goal, thus far, of playing professional football has fallen short, he was on the football roster of Chadron State College through his junior year. It was however at that time that he said his love for football waned and he became depressed and chose a different route

He ultimately moved to Denver and was later asked to do some inspirational speaking, which is what he now says is his calling, and is what brought him to Hot Springs last week to speak to the students and families of the Hot Springs School District at their annual Fields of Faith event.

“God is going to use you,” Lamb said. “Maybe not now, tomorrow, next year or 10 years from now. You just gotta believe that he is going to be there for you. Because no matter what, he is the Number 1 thing that you need in your life. That’s something I’ve learned in the past two years ... I was so depressed, and now getting the opportunity to come here. I found a new revelation in my life, because it feels like this is my calling to come and talk to you guys.”

Fields of Faith is a student-led effort and is held across the country each October, where students invite their own classmates and teammates to meet on their school’s athletic field to hear fellow students share their faith testimonies, challenge them to read the Bible and to come to faith in Jesus Christ.

This was the fourth such event held in Hot Springs, and is an extension of the FCA Huddle group which meets every Wednesday morning before school and is led by Mellisa Vande Stroet.

The concept for Fields of Faith was first inspired in 2002, when Oklahoma FCA Area Director, Jeff Martin, prayed about what to do with his heartfelt frustration regarding the temptations and spiritual battles facing our more “spectator generation” youth. Martin said that God then led him to 2 Chronicles 34 for the answer. King Josiah, an influential teenager, gathered his people and challenged them to read God’s Word. As a result, they changed their culture.

In 2004, Martin’s dream came true when more than 6,000 students gathered on school athletic fields throughout Oklahoma, Texas and Kansas for Fields of Faith, eventually making its way to Hot Springs as well.

“If you don’t believe that someone believes in you, 100 percent, I will believe in you every single time,” said Lamb. “Because, the things I have done through Christ, like this. If he can use me, why in the world wouldn’t he use you?”

Prior to Lamb sharing his story and testimony, senior student-athletes Carl Massa and Brooke Harkless also shared theirs.

Massa spoke of how he use to share all of his thoughts and problems with his older brother Thomas. But after Thomas moved away to college a couple of years ago, Carl found himself oftentimes alone and dealing with his problems by himself. He soon however began to trust in God as someone with whom he could lean on. Carl then urged his classmates in the attendance to do the same and have faith and take trust in Him, but also be patient.

“God is always there for you,” Massa said. “Trust that He is.”

Harkless said that one of the first times she experienced the power of Christ was at a confirmation retreat during her 7th grade year, where she saw some of her peers come out of confession “glowing” and “with tears of joy.”

“All of this weight had just been lifted off their shoulders. I was there and I experienced that with them,” Harkless said, as she described how she had a similar reaction herself after coming out of confession. “At that point, I realized how important it was to have a relationship with God and how long I’d really been longing for it.”

Harkless then spoke of how she was the only daughter in a family of seven brothers and how she had always wanted a sister.

“Without knowing it, I actually did have a sister, this whole time,” she smiled.

“Andrea Norton was the closest thing I ever had to a sister. And it wasn’t until she was gone that I realized the impact that she had on my whole entire life,” Harkless said of her former babysitter, who died April 13, 2019, in an accident while hiking with some college friends in Arkansas, three months short of her 21st birthday. After Andrea’s death, Brooke said that is when she began questioning her faith.

“I always thought to myself, why her? Why someone who is so faithful and just a good person all-around? I was mad,” she said, while describing how Andrea’s death put a strain on her own relationship with God.

“Eventually I was able to sit down and I really thought about how I was feeling. And I came to the conclusion that Andrea wouldn’t want me feeling this way. And I realized because of the person she was, she fulfilled her purpose, and that God needed her up there way more than He needed her down here, so she can help keep us on track.”

From that day on, Harkless said she now asks herself “How can I make ‘Drea proud?”

“I put my trust in God and Andrea, because I know they will lead me in the right way,” Harkless concluded. “They will lead me throughout my life to fulfill my purpose, so that one day, I can join them.”