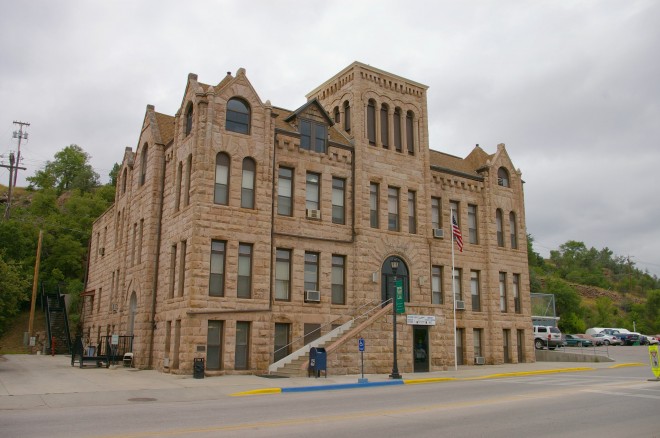 HOT SPRINGS – The courtroom was full of people when the Fall River County Commission met on Thursday, Oct. 21. Commissioners came from Custer and Bennett County to hear a video presentation by Ronald Haugan, a farm management specialist at NDSU in Fargo, N.D.

Fall River County State’s Attorney Lance Russell and the commissioners invited Haugan to explain how North Dakota calculates data for cropland and grassland values that determine the amount of ag land taxes. The county commissioners with Russell and the ag land tax committee are working with State Representative Trish Ladner and State Senators Julie Frye-Mueller and Tim Goodwin to convince the South Dakota Department of Revenue to create a corrected soil table and to lower land taxes. Ladner and Frye-Mueller were present at the commission meeting.

Russell said the counties in North Dakota are involved in the process of determining which land is crop-able and which is not, but the South Dakota’s counties do not have input here.

“We need to develop more of the way you do things in North Dakota,” Russell said to Haugan, who said North Dakota uses three agencies to determine their values: the USDA National Agricultural Statistics Service (NASS); the Farm Services Agency and the USDA Risk Management Agency.

“Let’s see if we can get Ron to do a study of dichotomies between North Dakota’s system and South Dakota’s system,” Russell said, “Then, he can talk to Dr. Elliott at SDSU.” Dr. Matthew Elliott is a SDSU Extension Agribusiness specialist, who helps determine the land values in South Dakota. Russell further said that a resolution should go to the state legislature. “We need to draft a resolution, identify our problems, and present a solution,” he said.

State Representative Trish Ladner said she is supporting Draft 50, which is an act to provide for the assessment of certain agricultural land as non-cropland. “This is not just a West River problem, it’s a state problem,” she said. She gave examples of ranches in this area that have always been assessed as grassland and are now being assessed as cropland, which will increase taxes by as much as 60 and 300 percent.

“We need to support our ranchers and our growers,” she said. “I’d like to see the commissioners join forces with other commissioners of other counties. It’s not just a West River problem, it’s a state problem.”

Bill Clark, a rancher in Meade County, also spoke on land taxes and the assessed value. “Grassland is overtaxed,” he said.

In other business, the commissioners heard from attorney John Taylor of Sioux Falls, who represents the Fall River Solar Farm. There was discussion about the haul route that will be widened for use by the solar farm. County Highway Superintendent Randy Seiler will inspect the road. The commissioners approved the Haul Route Agreement contingent on the water board approving the depth of the waterline when construction is complete. There was also discussion about the strength of the fence around the solar farm. Area ranchers have asked the company to install a strong chain link fence.

The commissioners held a brief discussion about the proposed division of Fall River County into two legislative districts. The state is proposing to divide the county into two districts. One would extend from Oelrichs on the south, through Smithwick and north to Buffalo Gap and include Pine Ridge. The commissioners signed a resolution at their last meeting to keep all of the county in District 30.

The commissioners approved the following items: