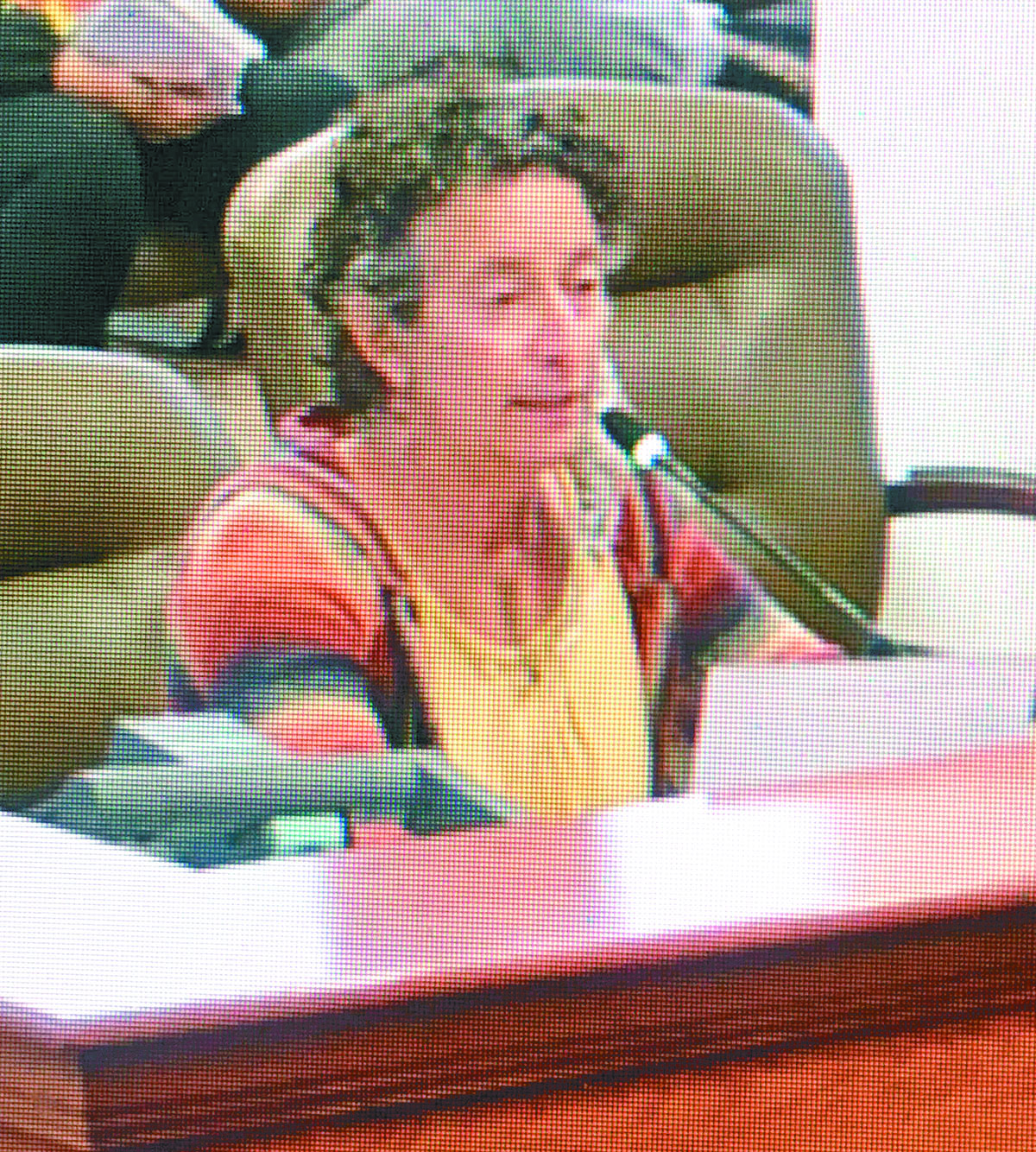 Caren (Rajni) Lerman of Hot Springs was the first of 23 members of the public to speak against Powertech’s uranium mining plans at a Water Board meeting held in Pierre last week on Oct. 6.

PIERRE – Powertech Inc.’s request to restart the water permitting process to eventually mine uranium near Edgemont was voted down unanimously in a hearing last week in Pierre on Wednesday, Oct. 6. by the Water Management Board of the South Dakota Department of Agricultural and Natural Resources (DANR).

At the end of a more than four-hour meeting, which included testimony in opposition from dozens of citizens, intervenors and state officials, Water Board member Rodney Freeman motioned to deny reopening the matter and to wait until “the federal issues are resolved to our satisfaction as a board.”

“This certainly should not be construed by any of the parties as a window into the merits of the case,” Freeman stated. “I just don’t think it’s appropriate for the State of South Dakota and this board to spend millions of dollars once again on an issue and then have the rug pulled out from under our feet after we’ve made a decision.”

Freeman’s comments were in reference to some federal permits which Powertech has been issued but are now being appealed. With the Water Board’s decision last week, Powertech’s request for water will remain on hold until those permits through the Nuclear Regulatory Commission and Environmental Protection Agency, along with another from the Bureau of Land Management, are ultimately resolved.

Powertech, a subsidiary of Azarga Uranium, which is based in British Columbia, Canada, originally began the water permitting process for their Dewey-Burdock Project northwest of Edgemont in Custer and Fall River Counties back in 2012. It was paused the following year at the request of Powertech while they awaited word on their federal permits. With their recent request to restart the water permitting process, it was their hope that it could take place in parallel with the appeals process currently underway with the federal government, which includes a case scheduled for opening arguments on Nov. 9, 2021, in Washington, D.C.

Members of the Water Board recommended that a status hearing be scheduled within six months to one year to revisit Powertech’s request and to see where the appeals process is at with the federal government for their other permits.

Prior to the board making its decision, a total of 23 registered individuals spoke during the public comment period of the meeting – both in person and online – in opposition of reopening water permitting process. Many of the speakers were from the Fall River County area, including Karen (Rajni) Lerman, Randy (Uriah) Luallin, Cheryln Leach-Valades, Jeff Larive, Susan Watt and Debra Lackey-Hay. Many others who spoke were also from the greater Black Hills area including several representing Oglala Sioux and Cheyenne Native American tribal interests.

“Throughout the hearings, it has been overwhelming that the people of Fall River County are against this operation, and rightly so,” claimed Randy Luallin. “We’ve had uranium mining in our county before. It was a boondoggle, the tax payers ended up cleaning up the mess and here we are again.”

Later in the day, during Powertech’s opportunity to speak, their representative, Rapid City-based attorney Matthew Naasz clarified that number in their application and said, “Ninety-eight percent of that requested appropriation will be recirculated, resulting in a net consumptive amount of about 2 percent of that 9,000 gallons per minute, as listed in the application.”

Jeff Larive’s public comments were based on his concerns that Powertech will be like other mining companies and not clean up their “mess” once operations have ceased.

Susan Watt, who is President of the Institute of Range and American Mustang (I.R.A.M.) near Hot Springs, joined the conversation while online and said she was speaking for the people of Fall River County, the Oglala Sioux Tribe and everyone who lives in the southwestern corner of South Dakota.

“We will never say it’s OK to take our water,” Watt said. “The water belongs to the citizens of the state  of South Dakota. It does not belong to any corporation to make money off of our lives here ... We will continue to raise our voices in opposition.”

Debra Lackey-Hay, another citizen who spoke, grew up in Edgemont where she lived near sulfuric acid, which was used to leach the uranium. She said the acid killed her father, who died of throat cancer.

“I’ve lived with this issue most of my life,” she said.

In addition to showing their opposition to uranium mining and Powertech’s request to reopen the water permitting process, many of those who spoke also requested that the intervenors list, established nearly a decade ago, be reopened due to many of those people on the list are now deceased or have moved away from the area. However, later in the meeting, it was pointed out by an attorney with the State of South Dakota, Ann Mines-Bailey, that state statute prevents the original intervenors to be reopened.

The City of Hot Springs, which was not an intervenor initially, was however been added to the list recently because their exclusion was due to a clerical error. A representative from City of Hot Springs was not at the meeting last week in Pierre, but the city did send a letter to the Water Board earlier this year and expressed their opposition to uranium mining and reopening the water permitting process.

Following public comment, the scheduled hearing began with input from the attorneys for Powertech and the State of South Dakota. Their comments were followed by input from intervenors in the case, which included representatives with the Clean Water Alliance and the Oglala-Sioux tribe, along with some other private individuals.

Powertech’s attorney Naasz was the only person who spoke in favor of restarting the permitting process and highlighted the “Catch 22” position they are in between the federal and state regulators with “everyone pointing the finger the other direction and saying that Powetech is not getting hurt by anyone.”

“Powertech has rights, too. Powertech has the rights to have its applications heard on the merits,” he said. “There’s no legal impediment to moving this matter forward, no reason these matters can’t go forward in parallel.”

Attorney Mines-Bailey, who has roots in Fall River County and graduated from Hot Springs High School in 1989, spoke on behalf of South Dakota’s chief engineer and the groundwater discharge program. She said that since Powertech’s federal permits were yet to be resolved, by definition, due to being in the federal appeals process, it was her department’s recommendation to continue holding off on reopening the water permit hearings.

“It is in the interest of efficiency to wait until the federal permits have been finalized,” Mines-Bailey stated.

Following input from the Powertech and State of South Dakota attorneys, comments were then heard from more than a dozen intervenors, including Fall River County residents Martin Meyer, Sarah Peterson, Brenda Gamache and Susan Henderson. All intervenors who spoke – online or in person – were opposed to reopening the water permit talks.