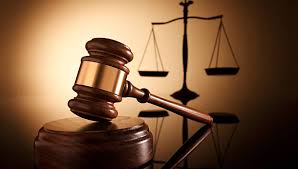 EDGEMONT – An incident in Edgemont involving a resident shooting a neighbor’s dog resulted in multiple charges and arrests on Monday and Tuesday of last week.

According to documents filed with the Fall River County Courthouse, Frank G. Rasmussen of 811 3rd Avenue in Edgemont was charged on Oct. 4 with one count of reckless discharge of a firearm and one count of killing or injuring an animal of another.

Fall River County Deputy Isnalawica Belt was dispatched to the Rasmussen residence where he questioned Deborah and Frank Rasmussen about the incident. In his case report, Belt said that Deborah Rasmussen told him that they were okay, and that the dog charged at her. She told him that this was about the seventh time it had happened and that the dog belonged to their neighbor, Jerry L. Alexander. Belt then asked to see the weapon that was used to shoot the dog, which was a .22 caliber rifle.

In his report, Belt said he requested a call for service history check to see if there were previous reports of the dog being reported on the Rasmussen property before. There were three previously filed complaints about the dog being on the property, one in December of 2018, one in June 2021, and the most recent one in August of this year. No citations were issued to Alexander in response to the complaints.

Belt indicated in his report that after he left the Rasmussen residence, he then went to the residence of Jerry L. Alexander at 905 3rd Avenue. He inquired of Alexander where the dog was shot, with Alexander responding that it was shot through the leg and rib area. According to Belt’s report, Alexander stated, “They’ve been hunting this dog for quite awhile. They told another officer they would shoot this dog. They went down to the city council office and said if my dog goes on their property, they will shoot it. This dog, he ain’t out very much. I need to simmer down before I get pissed off or I will light that place up.”

Belt explained to Alexander that he was going to be issued a citation for the dog being loose, which is a violation of county ordinance and that he would also be issuing a citation to Rasmussen for the discharge of a firearm in city limits.

On the following day, Tuesday, Oct. 5, Belt was at the Sheriff’s Office in Hot Springs when dispatch received a call from the Rasmussen residence reporting that someone was knocking on the door of the residence and the caller was afraid to open the door. Belt responded to the call, and while he was en route to Edgemont, he was informed that the reporting party from 811 3rd Avenue called back in and stated that the pounding on their door was worsening and someone was screaming at them. The occupants maintained their refusal to answer the door, and were awaiting the arrival of law enforcement.

When he arrived and knocked on the door of the Rasmussen residence, Belt indicated in his report that Deborah Rasmussen opened the door and told him that someone she didn’t recognize was banging on their door and that the banging was so hard and loud it was shaking the interior wall of their residence. Rasmussen said the person was saying, “You’re afraid of a bedridden dog! You won’t even come out here and talk to your neighbor!” Belt reported that Rasmussen described the person as very large, holding her hand to the top of her door frame to indicate their height which he estimated at 6-foot, 3-inches. Belt said he asked Rasmussen if she thought the person might have been Jerry Alexander, to which she responded, “He said he wasn’t, but I’m not sure.”

After leaving the Rasmussen residence, Belt went to the Alexander residence to speak with Jerry Alexander about the disturbance that had been reported at the Rasmussen residence. He pulled into the backyard area of the property and observed a light on in a shed next to the house. As he approached the shed, he observed two men seated at a card table with open containers of beer. Belt reported that one of the men was Alexander and that the second man was later identified as Kevin D. Eberle, who stood up and stated, “It was me. You want me to get up?”. According to Belt, Eberle then began moving toward him. Belt said he asked Eberle again what was going on, with Eberle responding, “Well I went down there to try and discuss things with the dog shooters. This is all about me, Jerry had nothing to do with it.”

According to Belt, when Eberle was asked to identify himself, he responded, “My name is Testosticles.” Belt said he repeated the question two more times and Eberle repeated the same answer, but later gave his real name when told to do so by Fall River County Deputy Rakness.

Belt said he informed Eberle that the issue involving the shot dog had been taken care of and that he shouldn’t try to intervene. Belt said that Eberle responded by saying it hadn’t been taken care of and that he would “kill someone who shot my dog.” Belt said that he explained to Eberle that he could not be going to the Rasmussen residence to demand answers and then placed him under arrest for disorderly conduct, simple assault intimidation, and also charged him with trespassing on premises , all misdemeanor violations.

After securing Eberle, Belt then turned to Alexander and asked him if he had been consuming alcohol that evening, to which he responded, “Yeah, I had two beers.” Upon that admission, Alexander was placed under arrest for a bond violation, which resulted from his arrest by Belt the previous Saturday for DUI and other charges.

Bond for Eberle was set at “no bond/hold until court” with Alexander’s bond set at $1,500.00 cash/surety. Court dates were not confirmed at the time of this article.