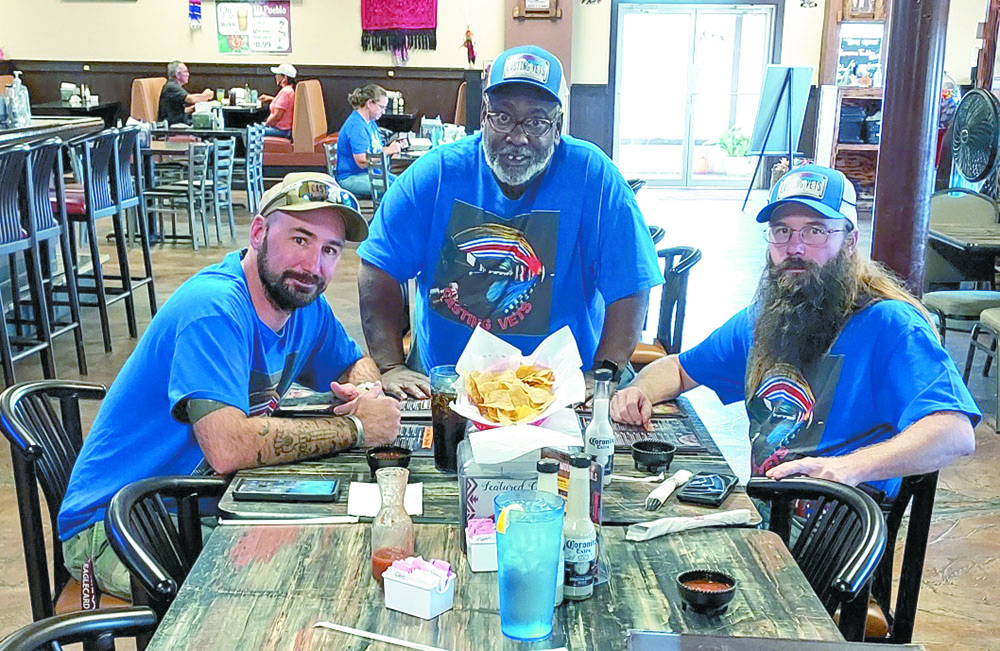 HOT SPRINGS – Since 2017, the local non-profit organization Casting Vets has been taking area military veterans fishing with the goal of improving their quality of life, one step at a time and one cast at a time.

Over the past five years, those fishing trips had only been day trips to local Black Hills lakes. But late last month, Casting Vets’ J.J. Johnson and J.R. Schaffner expanded what they do by taking Air Force Veteran Mark Roberts to the Chamberlain and Kennebec area for a weekend of catfishing.

While the fishing itself was not very good, the weekend as a whole was very memorable and is something both Johnson and Schaffner said they could see Casting Vets doing more of in the future.

“It was very beneficial to do an overnight trip,” stated Johnson, to which Schaffner agreed, as he added that it was more like a “guys weekend trip, where we bonded together. It was very spiritual and filled with lots of laughs.”

The two were still laughing as they retold the story of some of the colorful characters they met while on their overnight trip to Chamberlain, where they met local 72-year-old fishing legend Dave Bice, who gave them each some of his homemade fishing lures and who took them to one of his “secret” fishing holes near Kennebec, nestled between some tribal land along the Missouri River.

Johnson and Schaffner described how they met Bice after spotting him and two of his fishing buddies along the river shore in Chamberlain. “J.R. volunteered to go down and talk to them for some fishing tips,” Johnson said.

“Volun-told is more like it!” Schaffner responded, as the two both laughed while recalling their encounter with Bice, and the subsequent trek to his secret fishing hole the following morning.

Johnson said Bice became interested in helping them out after learning about Casting Vets and their mission to help heal veterans through the healing power of fishing. Bice said both he and his father were veterans as well.

Even though Bice’s secret fishing hole did not produce the catfish they had all hoped for, it still ended up being a rewarding trip for all involved, especially for veteran Roberts, who was the inspiration for the trip in the first place.

Roberts, originally from Arkansas, first became acquainted with Casting Vets three years ago while at the domiciliary at the Hot Springs VA. Since then, he has gone on numerous Casting Vets day trips and developed a close friendship with Schaffner. Now 40-years-old, Roberts was a generator mechanic in the Air Force while serving in both Iraq and Afghanistan. He recently graduated from Veterans Court, which is a form of probation available to U.S. Military veterans. He currently resides in Rapid City and works for the Veterans Administration there.

Roberts said he enjoys fishing, especially with the Casting Vets team, for the “brotherhood and camaraderie and peace of mind,” that comes with it.

Recently, Casting Vets founder J.J. Johnson announced that he was seeking help to run the administrative duties of the organization. He said he was very thankful to both Kate Highfill and Kay Birkholt of Hot Springs who have since stepped up to help out with that plea.

Birkholt, Johnson said, has been instrumental in setting up fundraising opportunities for Casting Vets, and Highfill, who also volunteers a lot at the Boys & Girls Club of Hot Springs and the Food Pantry, has taken on many of the computer-related responsibilities of the organization.

Despite the addition of Birkholt and Highfill, Johnson said more volunteers are still needed – for a variety of needs – especially now that it appears he will soon be leaving the area to live closer to his family in Texas, due to health reasons, he said.

Johnson said he wants to clarify some apparent misinterpretation of his recent plea for administrative help for Casting Vets. Despite his personal plans to leave Hot Springs to be with family and the need for more volunteers and help with administrative duties, the organization of Casting Vets is not going anywhere.

“My goal is to help build a team around J.R. before I go,” Johnson said.

A farewell party / potluck is being held this Sunday, Oct. 17, at 12 noon at the Southern Hills E-Free Church. The public is invited to attend, as well as church services that day, which begin at 10 a.m.