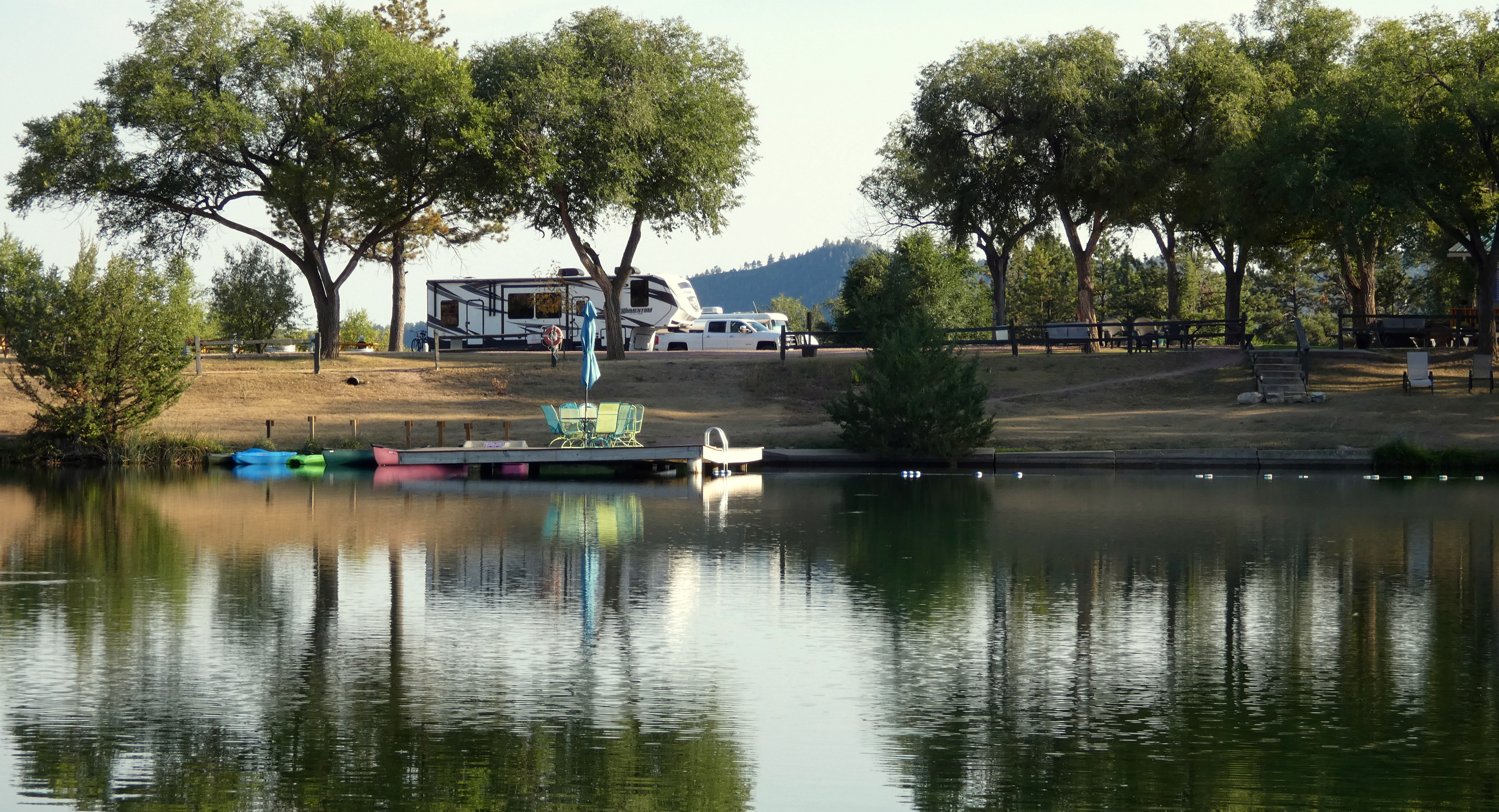 Hidden Lake Campground is located just north of Hot Springs on Larive Lake and is owned by Shane and Cristin Stewart. Cristin said that in the past two years the campground has been much busier than expected.

HOT SPRINGS – Campgrounds in and around Hot Springs report that they had a successful and busy summer season and expect to see a high number of campers through autumn.

“I’ve never seen this before; it’s been the busiest ever,” said Joe Allen, owner of the Allen Ranch Campground located south of Hot Springs on Fall River Road.

Allen, who has operated his campground since the mid-1990s, said it has been busy all summer long, even on weekdays.

“There have been a couple times I reached near capacity or had to turn people away,” Allen said. “It’s a popular spot. Families with children really enjoy being close to the warm river water. I’ve seen a lot of campers from Colorado, California, and Minnesota, as well as Texas and Wisconsin.”

The Allen Ranch has 12 RV sites, six tent sites, as well as additional “glamping” tents and tipis that guests can spend the night in.

Even though the campground does not stay open year-round, Allen said that he expects to keep busy well into fall.

“I stay open as long as I can until there is a good freeze, usually somewhere between October 15 and November 1,” Allen said. “My reservations until then already look good.”

Fall River Ranch RV Resort is Hot Springs’ newest campground and officially opened for business on July 1 of this year. The campground is owned by Todd and Melanie Wilson and is located between Hwy. 71 and the Hwy. 18 truck bypass across from Woolly’s.

“We had a great summer and expect a strong September,” said Melanie Wilson. “We stayed busy all summer long and all week long. I’ve seen a lot of everybody come here, with the most from Minnesota and California, as well as Idaho and Arizona.”

The campground currently has 20 sites with full hook up, and the Wilsons plan to stay open year-round to cater to travelers who may become trapped in a winter storm or people looking to stay at the campground for an extended period of time.

“We are more than happy to accommodate anyone,” Wilson said.

The Wilsons are working on plans to construct a campground office and bath house. Upon the future completion of the bath house, the campground will be able to accept tent campers.

“We love the business and our goal is to get people here and spend their money in Hot Springs,” Wilson added.

Andrew Kathman is the new Superintendent of Angostura Recreation Area (which also includes the Sheps Canyon unit) and began his term in late June of this year.

Together, Angostura and Sheps Canyon have five campgrounds with more than 150 campsites and 14 camping cabins.

“From my understanding, the past two years have been busy with many weekdays being full. All sites are reservable [through www.campsd.com] and many people have called looking for a site who we’ve had to turn away,” Kathman said.

Kathman said that the overwhelming majority of campers are from South Dakota, but he also sees a lot of license plates from Minnesota, California, Colorado, Wyoming, and Florida.

“We are starting to see our weekday reservations taper off but weekends are still full,” Kathman said. “The camping cabins are always full and are expected to be full through fall because of hunting season.”

Kathman also briefly discussed plans to change the free dispersed camping along the western shore of the reservoir in Sheps Canyon to paid camping.

According to the South Dakota Game, Fish and Parks (SD GFP) Commission proposal, “Sheps Canyon Lakeside Use Areas are seeing increasing camping use. With the increased use comes increased need for basic services such as designated camp pads, fire grates, and picnic tables.” The proposed future cost of camping in this area is $11 per night.

“This proposal was passed by the commission so it is now available for public comment,” said Nick Harrington, Communications Manager for SD GFP. “Individuals can comment on this proposal at http://gfp.sd.gov/forms/positions and at the public hearing at the October meeting in Deadwood. Following the public comment period and public hearing, the commission will take final action on this item, which is when it would then ultimately go into rule or not.”

“This was a record-breaking summer in terms of number of campers,” said Suzanne Givler, who owns and operates the campground at Maverick Junction with her husband Todd. “June and July were both extremely busy. July is usually our busiest month. This year the campground was completely full most nights in July.”

The Givlers bought the Hot Springs KOA at the beginning of the 2016 season and Suzanne said that in the past two years, she has seen a lot of travelers new to camping.

“We see many South Dakota plates of course, as well as all surrounding states and Colorado. Motorhomes and travel trailers seem to be the most common types of RVs we see. Last year and this year there have been many guests who are new to camping,” Givler said.

Even though the camp store closes each year on Halloween, the campground remains open until the end of November, and the Givlers expect to see a high number of campers until then.

“Usually we get high numbers of guests in autumn who have been waiting for shoulder season to travel. Cabin and tent reservations taper but RV reservations usually stay strong through September,” Givler said.

“We have been so busy this year,” said Cristin Stewart, who owns the campground with her husband Shane. “We opened in 2019 just two months before the pandemic. However, in the past two years we have had a lot more business than we projected.”

The campground, which is located just north of Hot Springs on Larive Lake, has 22 RV sites, 10 cabins, and two tent sites.

Stewart said that she has seen the most campers from South Dakota, but also many from Minnesota, Nebraska, and Colorado.

Stewart said the campground and cabins remained almost at 100% capacity every day in June, July, and August, although bookings are beginning to taper off a bit.

“We currently have reservations until October 11. We don’t have a set date yet to close for the season but it will probably be around that time. It’s just too hard not knowing what the weather will do,” Stewart said.

Stewart explained that she had a hard time hiring enough employees for the summer season, and she is still looking for help.

“This fall we are going to be working on the campground and we also plan on planting about 20 trees,” Stewart said.

Elk Mountain Campground at Wind Cave National Park has also been busy this summer. Elk Mountain is the only campground at the park and does not take reservations; all sites are first come, first serve.

“Our busiest days this summer were holidays and weekends, with July being the busiest month,” said Tom Farrell, Chief of Interpretation for Wind Cave. “I’m not sure if it was a record-breaking year, but campground visitation was markedly higher than last year.”

Farrell said that as long as the weather stays decent, the majority of the campground will remain open until Sept. 27. He also expects a high number of campers through autumn.

“This year we plan to winterize our campground on Monday, September 27,” Farrell said. “After that, the water will be turned off and only B Loop and its vault toilet will be available for the winter. In the fall, you can often listen to bugling elk right from your campsite. It’s a little off the beaten path and a great weekend getaway.”