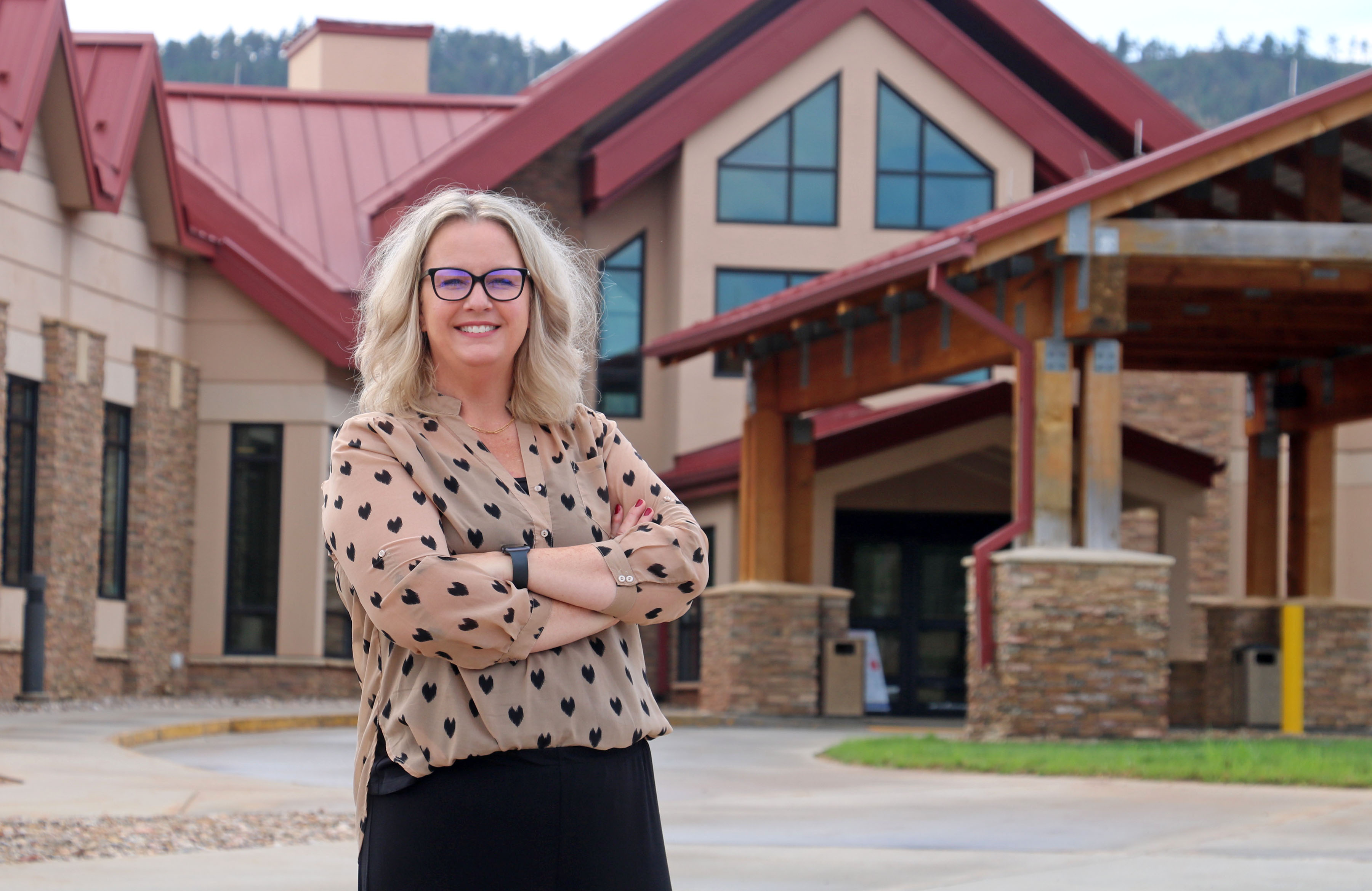 HOT SPRINGS – New CEO of Fall River Health Services, Nicky Gilbertson, says she is excited about her new position with Hot Springs’ independent healthcare provider and is looking forward to helping lead the facility, and its more than 200 employees, into a new era of healthcare in the Southern Hills.

Gilbertson, who started at FRHS at the beginning of September, came to Hot Springs from Vermillion, where she worked 16 years for Aegis Therapies. One of the nation’s leading providers of contract rehabilitation and wellness services, Gilbertson was a District Manager for Aegis Therapies for her first eight years with the company, and for the last eight, she has served as an Area Vice President.

A lifelong South Dakota resident, Gilbertson was raised on a small farm outside Wakonda – a small town of just over 300 people located just northeast of Yankton. She attended undergraduate studies at Augustana College in Sioux Falls on an athletic scholarship and later graduate school at the University of South Dakota (USD).

Her family includes husband Jeff, who is employed with USD and is able to work remotely from Hot Springs. The couple has four children, including their youngest two  – son Will, age 16 and a junior at Hot Springs High School; and daughter Izzy, age 12 and a 7th-grader in Hot Springs Middle School. Both are currently active in sports as Will is on the Bison football team and Izzy is the goalie for the soccer team. Their oldest children include daughter Madyson, age 21 and finishing up nursing school at Mt. Marty University; and son Noah, age 18 and attending USD this fall.

Nicky said family is very important to her and the fact that they have relatives nearby in Lead and Belle Fourche played a role in them deciding to make the move to West River. She and her family were active in their community of Vermillion, including at their church and the school system, and hope to do the same here.

According to the President of the Board of Trustees, Ina Winter, the position of CEO at Fall River Health Services became open earlier this year when the previous CEO, Tricia Uhlir, who led the facility for the past 10 years, decided to step down for a less stressful position with the organization. She is now the Nursing Home Administrator.

“Her leadership during her tenure positioned FRHS as a highly successful organization in the universe of critical access hospitals,” stated Winter, while adding, “as the new CEO settles in, she will likely be temporarily answering questions to assist Nicky when asked and needed.”

When asked about what made Gilbertson the best candidate to fill the position, Winter said, “Nicky stood out as a team player with a solid background in healthcare. She comes with a resume heavy in management and leadership. Nicky has good working relationships with diverse healthcare players in South Dakota.”

With staffing being one of the biggest challenges facing healthcare providers, not only in Hot Springs, but throughout the country, Gilbertson agreed that her previous relationship with healthcare universities like USD and Mount Marty should prove very beneficial for the future of FRHS.

Another challenge facing FRHS identified by Gilberston, which she said is more unique to Hot Springs than other places around the country, is housing. She said she hopes to be able to work in the future with city leaders and get involved with the community and the Chamber of Commerce to help address some of those needs.

“Nicky’s strengths lie in strategic planning and implementation,” added Winter. “She understands the nuances of change leadership and the importance of building strong community ties as well as having a practical approach to business ventures. FRHS is currently expanding our surgery department, and with Nicky’s experience in various health facilities, she will greatly help us expand these services.”

Gilbertson said that one of the things which attracted her to applying for the CEO position with Fall River Health Services was due to its independence from some of the larger healthcare providers around the state, like Monument, Sanford and Avera. While being independent from those big three has its advantages, she also recognizes some of the challenges that come with those as well, including communication, funding and purchasing power, which is why she is committed to tackling those challenges also.

Winter concurred and stated, “FRHS is committed to remaining an independent healthcare organization in the Southern Black Hills. We are striving to become the employer of choice and the healthcare provider of choice for our community.”

Don DeVries, a fellow member of the FRHS Board of Trustees, and the chairman of the search committee which hired Gilbertson, added some exciting news by saing, “We have continually added medical services, to the place where we are out of room. We are currently planning a building project to accommodate even more medical services we will provide for the area.”