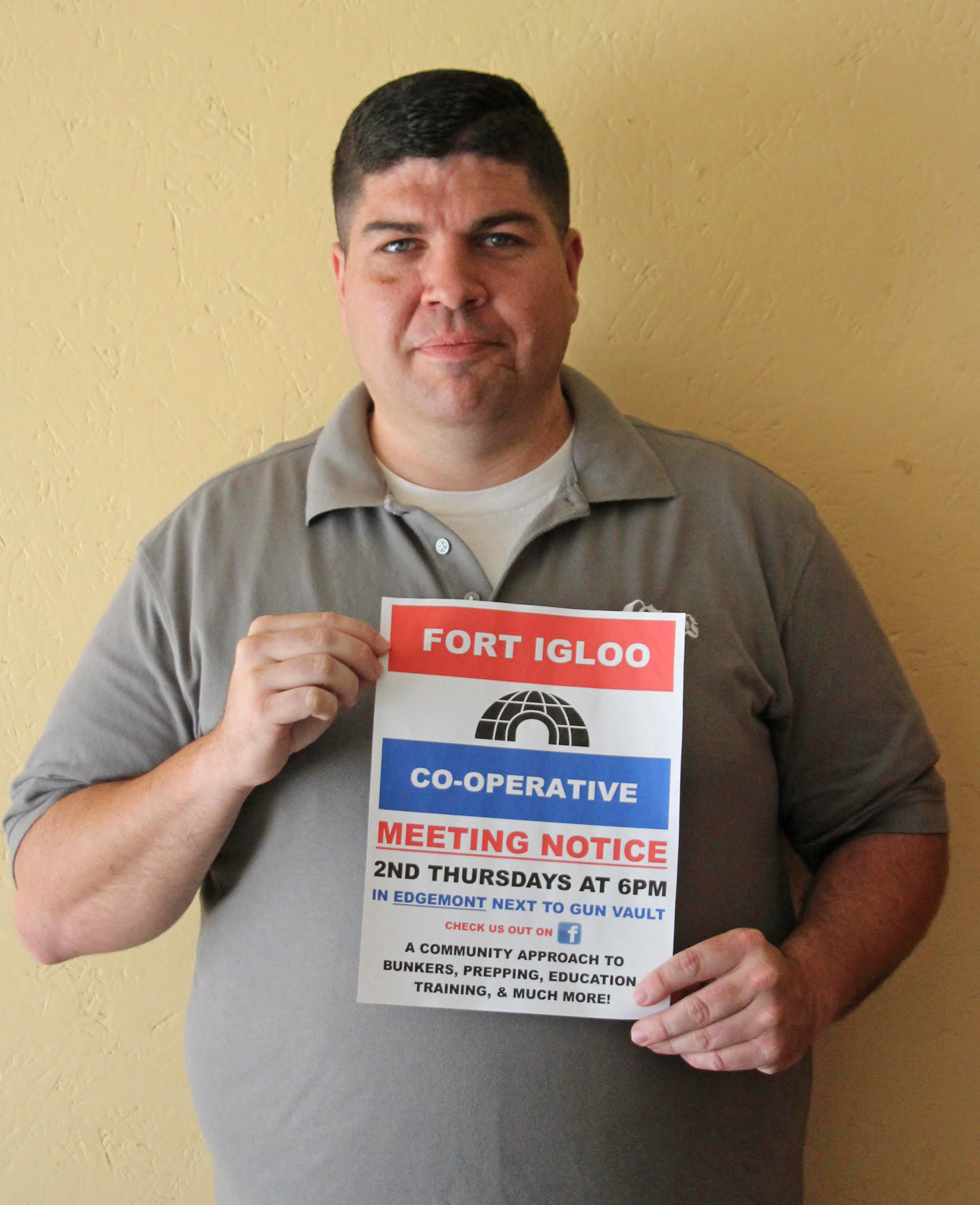 Ben Collett is pictured here holding a copy of the announcement for meetings of the Fort Igloo Co-operative, an informal group promoting ideas and information for the ‘prepper lifestyle’ that might be of interest to those taking refuge at Vivos xPoint and other survivalist properties.

EDGEMONT – Recent new resident Ben Collett of Georgetown, Ky., started looking for a safe haven after the pandemic took off resulting in mask mandates, shutdowns and other restrictions that he viewed as impinging upon his personal freedom. He says he feels like anyone should be able to roll the dice and take chances and that any mentionable limitation amounts to government overreach.

So Collett started looking around for somewhere to go that would provide a place in times of turmoil. He observed the fallout from the total collapse of the Afghan government and felt as though there could be a domino effect that would involve other localities across the globe. Although his efforts through online searching yielded multiple other sites for those who desire to locate a secure community offering elevated protection in times of great uncertainty, Collett says he only seriously considered Vivos xPoint’s facility in Provo.

The 18-square mile property that is now Vivos xPoint was acquired in 2016 by Robert Vicino’s California-based company with plans to transform it into a survivalist community capable of withstanding an apocalyptic collapse of society. Locally, it is still referred to by many locals as simply “Igloo”, a name derived due to the appearance of the bunkers that were part of the Black Hills Ordinance Depot which stored bombs and chemical weapons in them, which reminded many of the Inuit dwelling structures built from ice.

“It was located far from strategic urban centers that might be attacked in a war or that might suffer mob violence during a societal collapse or government breakdown,” offered Collett. “The divisive nature of politics and the fractured nature of many traditional communities and values systems just makes a lot of the country unappealing. I prefer order and structure to chaos.”

Collett appeared destined to leave the hills of Kentucky for Frankfort, Germany, for an entrepreneurial venture back in April, when everything started to shut down due to the pandemic. Travel to Germany became very restricted and Collett reassessed everything and decided that he needed to wait out the few weeks that was said were needed to ‘flatten the curve’. Weeks turned into months and by August of last year, Collett reached out to Vivos to inquire about the membership process, which includes a skills and expertise inquiry and questions about how the applicant would benefit the community if accepted. Collett submitted questions to Vivos as well as he needed clarification on some logistical issues and organizational structure. Heestimates that he received notification that his membership application had been accepted no more than six weeks later.

Collett came out to the area in May and has been renting an apartment in Edgemont since his arrival. He is currently searching for professional employment in the area and has applied for positions throughout the region. He hopes to acquire a bunker at Vivos before the end of the year and is looking forward to contributing to community progress there through his background in communications that would help the community move toward independence from outside resources. “To make it the ultimate survival community, the direction to move in would be described as a ‘closed loop system’, where all the needs by inhabitants were achieved through internal production,” says Collett. “Ideally the production of food and other goods, energy generation, skilled trades, and even a localized economy where some goods were sold to those living on the outside.” He added that survivalist training classes and even the testing of survival gear could be performed on site with the notion that non-residents could benefit and share this knowledge with others.

Due to his interest in advancing independence within the borders of the former Ft. Igloo property, with the understanding that he is not a formal representative of Vivos xPoint, Collett posted flyers advertising a meeting that was held back on September 9th for those who might be interested in learning about residential opportunities at the local survival community but might not be able to afford to purchase a bunker on their own. He hopes that the meetings will attract prospective residents who bring some sort of knowledge or skill with them that will serve toward the goal of the community being able to rely largely on the people and resources within its perimeter. He also thinks its important to develop a network with Edgemont and surrounding communities that might intercommunity cooperation should societal collapse impact those nearest neighbors.

Six curious Edgemont area residents attended the meeting on the 9th, and posed mostly logistical questions that belied the skepticism and reservation that often meets someone new to an area that the locals label as an ‘outsider’. When speaking privately with a couple of those in attendance, it appeared that their perception of Collett’s presentation was to gauge interest in cooperatively acquiring one of the bunkers in order to reduce the purchase cost for the collaborating individuals. Collett immediately refuted this notion when put before him, saying that if he decided to share a bunker with others he most likely would pursue the interest of family and friends before entertaining the interest of perfect strangers. In addition Collett wants to retain the discretion and authority desired by any homeowner and wouldn’t want to inherently compromise that through some sort of cooperative living agreement. He he says he would not rule out consideration of those he may get to know over time through interacting with them as local residents.

Collett would like to invite interested folks to come to the next meeting to be held on Thursday, October 14th, next to the Gun Vault in downtown Edgemont. He also welcomes folks to visit his Facebook page, Fort Igloo Co-operative, where they can learn more about his ideas as well as have the opportunity to ask questions.