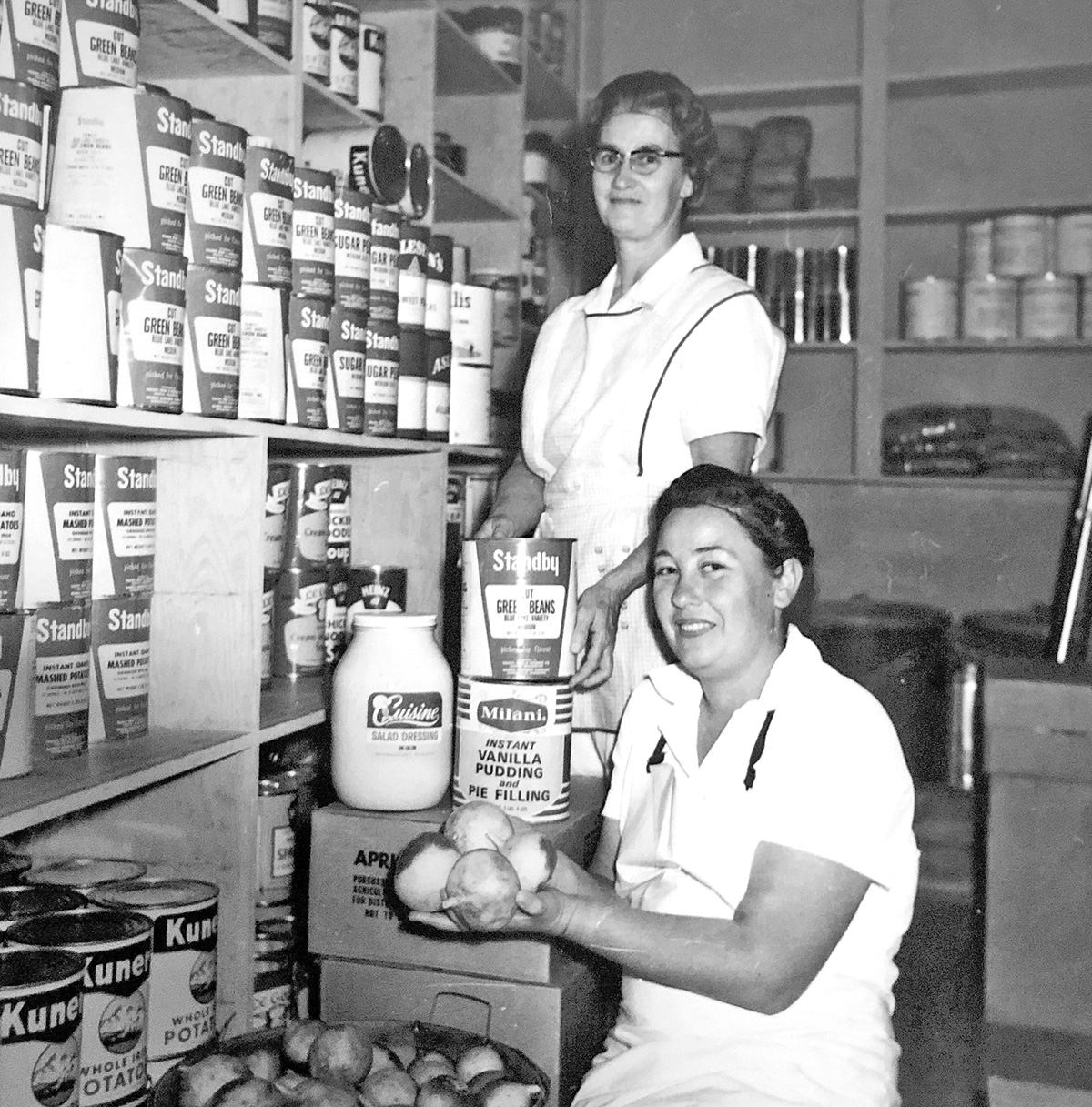 In this 1969 photo, Esther Girton (back) is pictured with co-worker Dessie Adair stocking food storage shelves at the school. Esther’s co-worker at that time, Adair, later remarried and became Dessie Baxter. She passed away in July 2019, at the age of 87.

HOT SPRINGS – On Monday, Sept. 27, Esther Girton of Hot Springs, known by many as the lunch lady, Auntie Esther or Gramma, turned 104 years-old.

Esther (Brill) Girton was born in 1917 in Platte, S.D., one of six children in a farming family.

“We had a very good life,” recalled Esther, “it was the depression so we didn’t have nothin’ but grasshoppers and beetles but we were very happy. My mother always found something for us to eat; I don’t know how she did it.”

Though times were tough Esther remembers a life of fun.

“I loved to ride horse,” she said, “the faster they went, the better. That’s why I have one leg shorter than the other, because a horse threw me.”

On the farm Esther remembers her job was to catch grasshoppers.

“They were everywhere. No one knows how that was. Them grasshoppers didn’t bite, but then came the beetles and they were murder,” she exclaimed.

“Boy, that was wild money back then,” she laughed. But her parents were still on hard times so she sent all her wages back home.

“She told me her parents were so happy that she could work,” said Wendy Paypay, Esther’s granddaughter. “Work was hard to come by back then and the family needed the money.”

By 18 Esther had fallen in love.

“Lloyd Girton was so handsome,” she giggled, “he was lookin’ so good with curly hair. He didn’t dance but he took me to all the dances. We just went around the floor. My mother made him dance with her so he would learn, but he never learned. Everybody liked Lloyd.”

In order to marry, she had to travel to Hot Springs where his parents were to seek permission for him to wed.

“In those days a man couldn’t marry until he was 21 so Lloyd had to get written permission from his parents,” explained Paypay.

Lloyd began working for the Texaco bulk fuel hauling out of Hot Springs and the young couple welcomed son Bob. Soon thereafter, America entered into World War II and Lloyd was shipped to Europe as a medic.

“Somedays I would get three letters,” said Esther, admitting that sometimes days would go by without word and that waiting to hear from Lloyd was very difficult, yet she through it all she remained positive.

“I remember one of his letters he said a soldier had got his left arm blown off and was crying wanting Lloyd to find his wedding ring. He got that ring for him, that’s what they did during the war.”

Another letter she recalled he told her that “the mosquitoes were so big he had to hang on to the grass to help from being carried away”.

Too soon, her young son was school bound.

One of Esther’s joys was walking him to school, but he outgrew that kind of mothering soon begging his mother to let him walk to school alone.

“Back then all the kids had to walk all those steps up to the schoolhouse (now the Pioneer Museum),” recalled Esther,  “my son wanted to go by himself,  so I would hide behind the library and watch him go up the steps. He didn’t like me to spy on him but I watched him anyway.”

Soon Esther found her comfort zone as the local babysitter of choice, a job she loved and was very proud of.

“Babysitting and taking in wash helped to pay for our home,” she said with pride, “a home I still own.”

A Hot Springs High School alumni from the Class of 1967, Steve McBride recalls his happy times with Esther as his babysitter.

“I was born in 1949,” recalled McBride, “and Esther was often my babysitter from the early 50s to the 60s. She was wonderful it was always fun to go to Esther’s house. One thing I remember particularly is that she liked to bake and one of the things she introduced to us kids and our families were Snickerdoodles. Just the name was catchy, a funny name and they were wonderful cookies. I still like them to this day.”

Though babysitting was fun for Esther, as she loved children, her passion for cooking just couldn’t be dimmed and by 1960 she had a cooking certificate under her belt and was working at the Hot Springs school quickly earning her moniker of ‘lunch lady’.

Her morning began early as bread had to be made, potatoes peeled and pounds and pounds of meat had to be cooked.

“My favorite thing to cook was hamburger and chili, we would make 500 servings of chili, enough for seconds, it was a lot of work but we were a good bunch of ladies. On Christmas and Thanksgiving we had turkey for the children, we had to bake at least five to feed all the children, that’s a lot of turkey.”

“I remember the ‘lunch lady’,” said another HSHS Class of 1967 alumni Mike Evans. “She was always so friendly and bright. Every time we went into the lunchroom she was smiling.”

However, her love for the children was not only found in her bright smile, it was also found in her desire to fill hungry young bellies. “She used to give me double portions of mashed potatoes,” said Evans smiling at the memory.

“I love to cook and I love children,” she explained of the apparent match made in heaven. “My favorite part of being the lunch lady was the children, many of them called me Aunt Esther, and when the next generation came up they just called me Grandma.”

Esther retired in 1981 and was given a watch as a retirement gift; a watch she still wears to this day even though the hands have long since stopped moving.

In her retirement Esther enjoyed sewing, much to her granddaughters chagrin.

“She used to sew most of my clothing which was a nightmare for me because I actually had to wear them,” laughed Paypay. “They were those nylon slacks with a matching vest in different colors.” Though the memory torments her she admits, “I still have her sewing machine.”

Now Esther enjoys living with her granddaughter Wendy and her husband George and watching the world around her, the sky, the trees and her occasional Dairy Queen ice cream.

“I am so blessed,” she said with a huge smile.