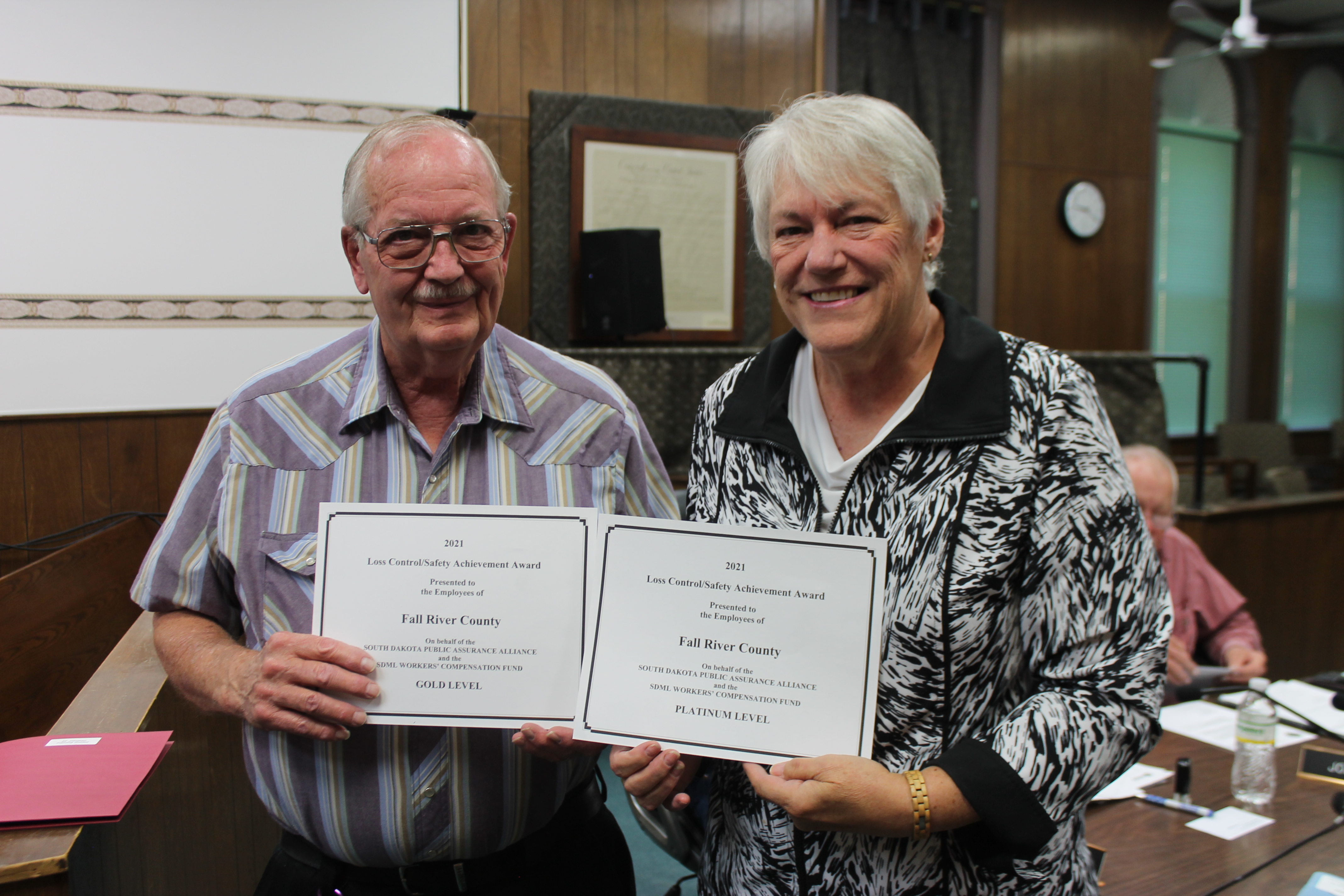 Fall River County Emergency Manager Frank Maynard and Commissioner Deb Russell hold the gold and platinum certificates the county received from Safety Benefits Inc. during the South Dakota County meeting held in Rapid City in September. Russell said Maynard was instrumental in the county being recognized for employee safety this past year. In addition to this certificate, Russell was also presented a plaque at last week’s county meeting in appreciation for serving as president of the South Dakota Association of County Commissioners during the past year.

HOT SPRINGS – The Fall River County Commission approved the second reading of the county’s medical cannabis establishment licensing ordinances during a special meeting held on Sept. 7, but now will wait for changes expected from the state. Because the state’s lawmakers made some adjustments to the proposed rules for medical cannabis licensing last week, State’s Attorney Lance Russell advised the commission to wait until the South Dakota Commission makes recommendations that could change the county’s ordinances.

“There’s no hurry,” Russell said. “We’re in a holding pattern.”

Russell said a person who wants a medical cannabis establishment license will be required to obtain a state license before applying for a county license. The Fall River County Commission approved having one medical cannabis dispensary in the county, outside of the municipalities. Currently, the state requires the county to have at least one dispensary and allows up to four. Each municipality decides on the number of dispensaries that will be allowed within their city limits.

Also, the commissioners recognized Fall River County Emergency Manager Frank Maynard for the integral part he played in the county receiving the gold level and platinum level workplace safety awards from Safety Benefits Inc. this year. This is the second year in a row that Fall River County received the platinum level award during the county convention. Platinum level means there were no accident claims made by county employees during the year, and the gold was earned because employees met certain safety criteria.

In other business, County GIS officer Stacey Martin reported that there have been 101 requests for new addresses in the county this year. She also said the 11 new roads have been named this year.

Director of Equalization Susie Hayes reported that at least 99 units at the former US Army’s Black Hills Ordnance Depot at Igloo have been leased and about 30 of those units appear to be finished to some degree.

The commissioners approved the following items.

• Virtual training modules to accomplish requirements for the Safety Benefits program for jailers, dispatchers and law enforcement personnel at a cost of $3,264 a year