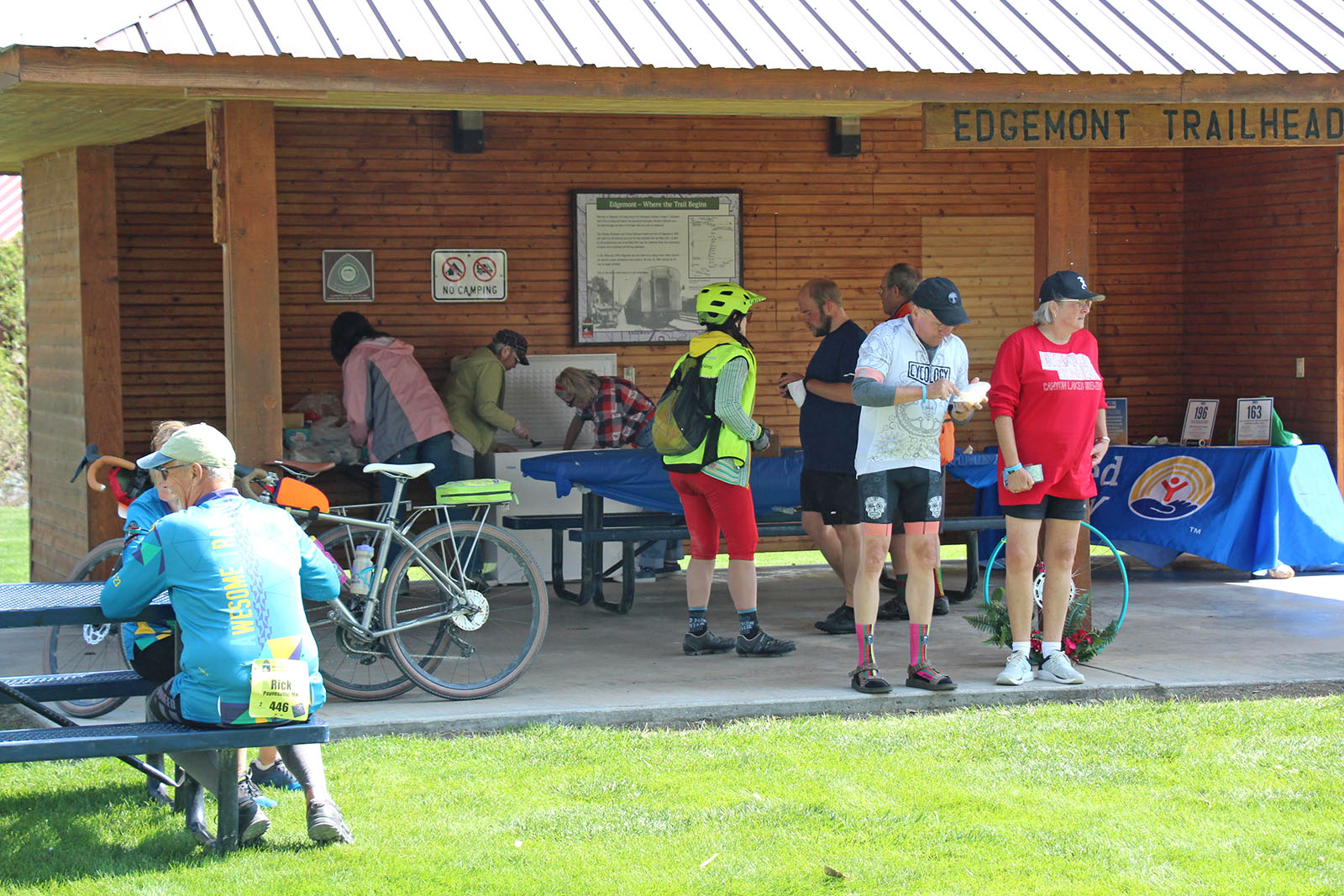 EDGEMONT – Last Friday, Sept. 17, there were lots of happy faces in Edgemont by mid-afternoon. Most of the participants in this year’s Mickelson Trail Trek had made it into town and were enjoying ice cream and pie to replenish energy expended in the first leg of the ride, which begins in Custer and ends in Edgemont. The Edgemont Area Chamber of Commerce served ice cream to participants and the Edgemont Historical Society sold pies for $3 a slice.

The event marked the second weekend in a row where the Mickelson Trail brought riders into Edgemont, following the “Big Mick” ride that ended in Edgemont as well on Saturday, Sept. 11.

Most everyone seemed to think the weather was more hospitable for the Trail Trek than what had been experienced earlier in the year on a couple of rides. “It’s not 113 degrees, and its not raining, so its just a wonderful day,” exclaimed Christina Heisler who was there as a volunteer with the Edgemont Area Chamber of Commerce.

“The weather overall is much nicer, if we could just turn the wind down a notch,” added Dana Garry-Reiprich, Trail Manager for the George S. Mickelson Trail who was present on Friday in Edgemont as riders came into town. Garry-Reiprich said that the weather forecast for the last two days of the ride appeared to be free of any storms or moisture.

Participants from all across the state and many from out of state were among the group of more than 100 that were relaxing in Edgemont City Park on Friday afternoon. In total, about 500 people registered for the event. Riding partners Laurie Gustafson and Kenny Doppenberg were participating in their 11th and 13th Mickelson Trail Treks, respectively. “I usually do two or three rides a year, but this year, it’s my only one,” said Doppenberg.

A group collectively known as “The Mob Squad”, is a loosely-organized group of family and friends from the Omaha area have participated for 14 years. Among them were Laura Deaver of Omaha, a first-time participant along with her parents Charlie and Dianne Henson and her brother, Chuck, all of whom live in Brandon, South Dakota. All shared the opinion that the Mickelson Trail is the top trail in South Dakota.

Friday’s leg served as the warm-up segment with mostly downhill riding from Custer to Edgemont. The last two legs of the trek are generally regarded as more physically demanding. On Saturday, participants rode from Custer to Rochford, a distance of just under 40 miles and on Sunday the ride concluded with a segment going from Rochford to Deadwood, which is 24 miles.