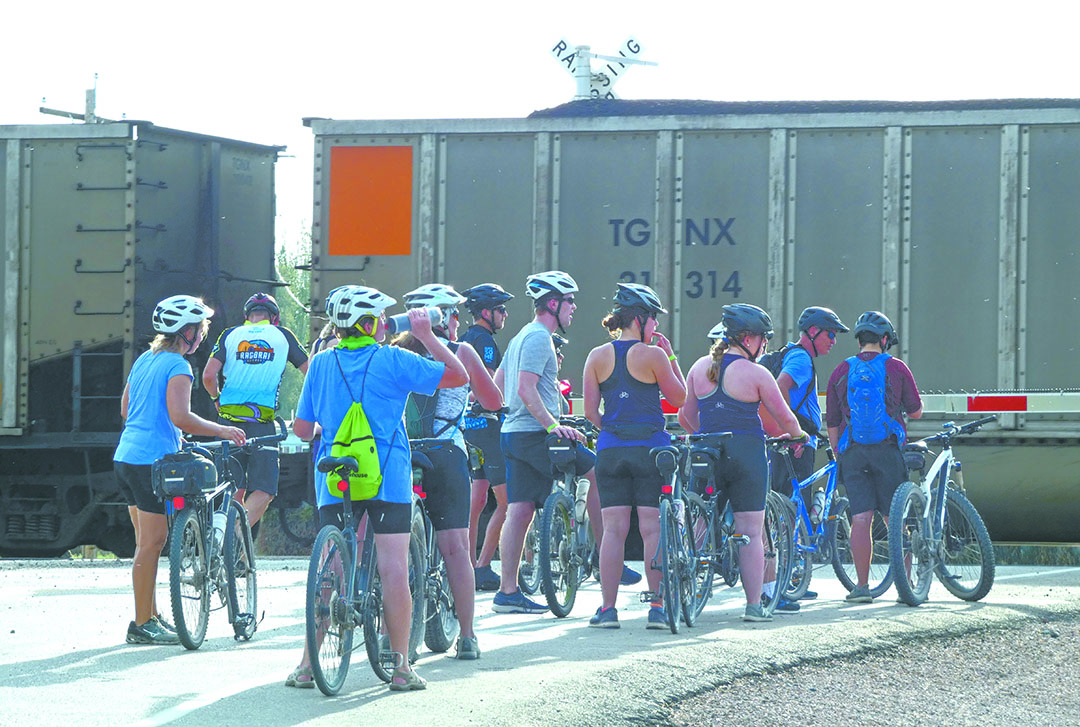 Big Mick riders were halted temporarily by one of Edgemont’s long coal trains.

The Mickelson Trail is the former railroad bed of the Burlington Northern line that allowed trains to transport people and materials to the gold mines of the Northern Hills. The line was abandoned by the railroad in the 1980s and later became South Dakota’s first “rails to trails” project. The trail was named in honor of Governor George S. Mickelson following his untimely death in the early 1990s.

Big Mick participants either rode in the “Century Ride,” which spans the entire 109-mile length of the trail from Deadwood to Edgemont, or the “Half-Century,” a shorter ride of 49 miles from the Custer area to Edgemont.

The bike riders began their day early, taking off on their southerly journey from Deadwood around sunrise.

Cyclists had to arrive at Minnekahta Junction on Hwy. 18 west of Hot Springs by 5:30 p.m. and then continue on their way to Edgemont to “officially finish” the event.

“We had a good turnout with about 145 riders from 16 different states,” said Ann Morrow, event coordinator and owner of Mickelson Trail Affiliates. “Our youngest rider was 14 years old and our oldest was 78. For a lot of them this was a bucket-list item to check off. It’s great to have events again, especially those that take place outdoors.”

With strong south/southwest winds and temperatures in the mid-90s, some participants had trouble completing the lengthy north-to-south bike ride.

According to Morrow, one participant had to be taken to the hospital and others had to be picked up in vehicles because they could not complete the challenging ride.

However, the majority of participants made it to the finish line and enjoyed food and drinks at the Igloo Bar and Hat Creek Grill in Edgemont.

Cad Waite, owner of the Hat Creek and Igloo Bar, said it was a fantastic event for the community and his businesses.

“We had over 100 riders  stop in at Igloo Bar for a catered menu,” Waite said. “Many were very pleased to have access to air-conditioning and the great selection of craft beers on tap.”

Pamela Fletcher and Susan Murphy, both of Bend, Ore., participated in the 49-mile Half-Century ride and were enjoying the comfortable temperatures later in the evening at the Edgemont City Park.

“We came here just for this ride and it was worth it,” Murphy said.