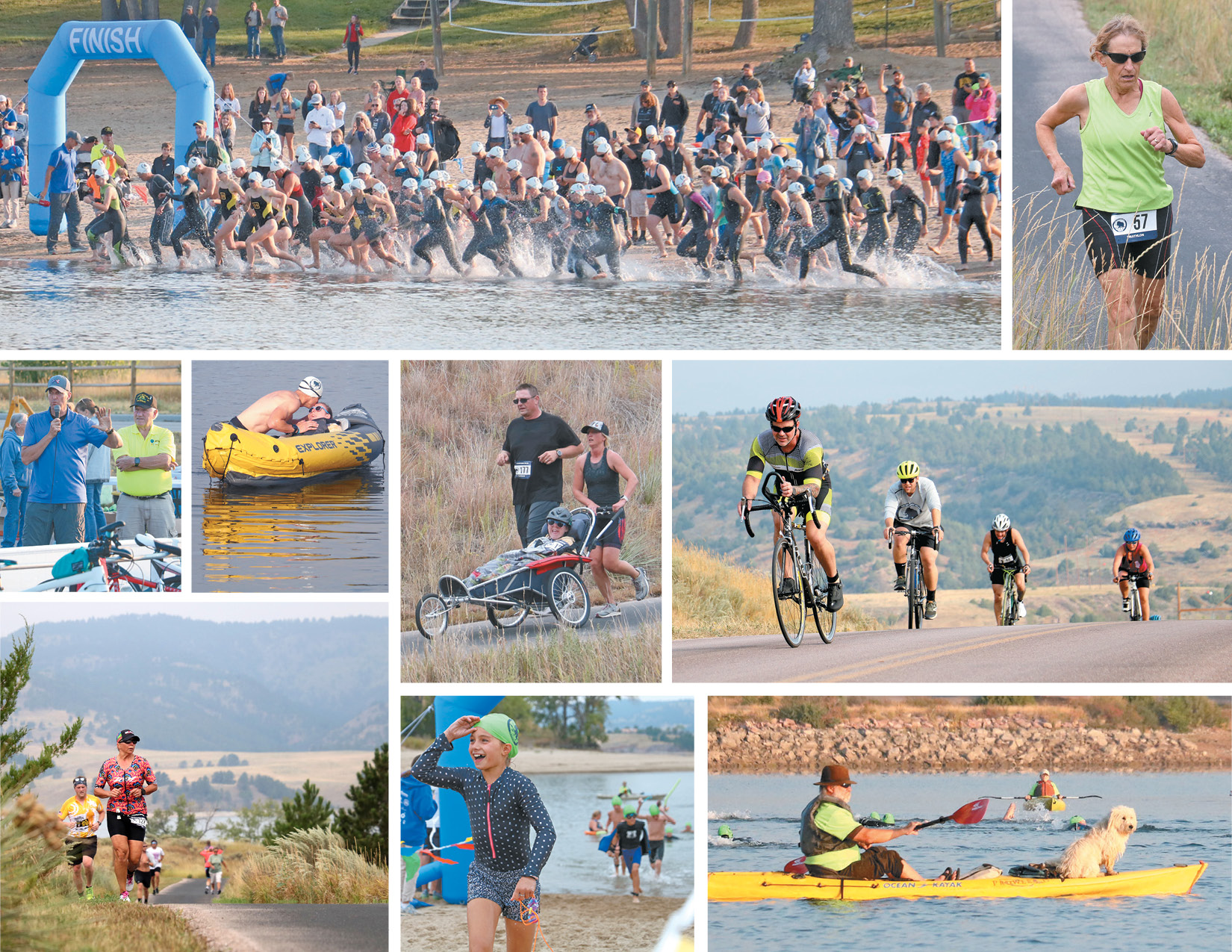 HOT SPRINGS – With over 200 competitors from nine different states as well as Canada, this past weekend’s 24th annual Southern Hills Triathlon at Angostura Recreation Area on Saturday, Sept. 4, was by-far the largest event ever.

In addition to having more competitors than ever, this year’s event was also filled with a number of inspiring stories – none more inspiring than the Woodland family from Heber City, Utah.

Halle Woodland, now aged 18 and a recent high school graduate, was born premature at just 23 weeks old. Due to complications at birth, Halle was diagnosed with cerebral palsy but she and her parents, Eric and Eliza, have not let that stop her from enjoying a wide variety of outdoor activities.

From a very young age, her parents have taken Halle bike riding, skiing, swimming and camping, as well as along with them while competing in a pair of half-marathons over the past couple of years. About a year ago, Eliza’s brother, Dr. Joshua Nierhring, a periodontist in Rapid City and co-owner of Dakota Regional Periodontics & Dental Implants, suggested to them that they travel to the Black Hills and compete in the Southern Hills Triathlon.

Once they decided give it a try, the family began training together and also working with a local bike shop in Heber City, Utah, on developing some adaptive equipment which would allow them to have Halle participate in the triathlon herself, even though she would be unable to compete herself.

This past Saturday then saw Halle’s uncle, Dr. Neirhring, swim the first leg with Halle in tow behind while riding in an inflatable kayak. Her parents Eric and Eliza swam along side both of the them the entire quarter mile. Once on shore, they then transferred Halle to a wheelchair and pushed her up the sandy beach to the bike transition area, where she was placed in a specially-designed buggy while being pulled by her dad as her mom Eliza her her bike along side.

For the running leg of the race, Halle then rode in a cart which was pushed by her mom as her dad ran alongside them, ultimately completing the entire race as a family – which was the very first triathlon for all of them. Many members of the Woodland family attended the event, including some from Florida and also Canada.

According to new race director Brendan Murphy, the Woodlands are just one fine example of a countless number of inspirational stories which can be seen in the world of triathlons, which is one of  the reasons why he became involved in the sport himself for the very first time in 1999 as a participant in the then 2nd annual Southern Hills Triathlon.

Murphy, who is from Rapid City and took over coordination of the event this year from the Hot Springs husband and wife duo of Barb Fetters and Pat Russell, said his first year coordinating the event was “phenomenal” and gave much of the credit to both Fetters and Russell for their assistance.

“Barb and Pat deserve a huge amount of the credit for how well things went this year. Their involvement was critical,” Murphy said, as he described his own triathlon-inspired approach of “crawl, walk, run” in learning to take over the event from the Friends of the Hot Springs Library group, which has organized and promoted it on their own for the past 15 years.

The triathlon got its start in 1998 as a creation of the Hot Springs Jaycees, who organized it on Labor Day weekend as part of the town’s Mammoth Days celebration. There were a total of 17 individuals who competed in the first-ever Jaycees/Mammoth Triathlon along with five teams, who all participated in a half-mile swim at Angostura, and then an 18-mile bike ride into Hot Springs followed by a five-mile run around Coldbrook Reservoir. The race directors were Mark Rude and Fr. Mark McCormick.

Included in the list of those who competed in that very-first 1998 triathlon in Hot Springs was the aforementioned Barb Fetters, who finished third that year in the “Women 40 & Over” division with a time of 2:47.13. That same name could also be found in this year’s 2021 triathlon results as Fetters is the only person who has competed in all 24 of the Southern Hills Triathlons, which she did this past weekend at the age of 68, while also helping to organize the race as the volunteer coordinator and logistical advisor.

Fetters said she too was also very pleased with how well the event went this year and is glad to have found someone like Brendan Murphy to take-on and carry-on the annual event. She recalled how the race has seen its share of changes over the years, including its route, the various distances offered and who coordinated it.

After being started by the Jaycees in 1998, the event was then handed off to the Miss South Dakota organization who operated it for a short time as well. Fetters recalled the Friends of the Library first taking it on around 2006. While not a part of that organization at the time, Fetters said she got involved because of her experience in competing in triathlons all over the country. Aside from some she’s competed in Florida, Fetters said she feels the Southern Hills Triathlon is the best there is around, thanks in a large part to the sandy beaches of Angostura.

Fetters said Rick Mossman was the race director for many years before her husband Pat Russell took it over, and she’s very confident the Murphy will take the event to even bigger heights.

Murphy, who has competed in Iron Man competitions in Florida and Colorado as well as many other triathlons around the country, said he first got involved with the planning of the 24th Southern Hills Triathlon past February when he and his wife had heard through the “triathlon grapevine” that the Friends of the Library were considering discontinuing the event. Murphy said he reached out the Fetters and Russell and expressed an interest in taking it over.

After a number of Zoom call meetings, a mutual agreement was struck and the rest, as they say, is history.

One of the primary keys to this year’s event growing well-past the typical participant number of around 120. Murphy said, was the broader use of social media and the creation of a brand-new website to promote the event (www.southernhillstri.com). Once the digital infrastructure was put into place, which included an all-digital registration method, the registrations started pouring in.

“I tout the event as the ‘premiere triathlon in South Dakota,’ and while that’s just self-proclaimed right now, that is the goal,” Murphy stated after the event this past Monday. In addition to boosting online marketing and streamlining the registration process, he also invested in a lot more signage for the route and also a speaker system to help make for an “electric atmosphere,” Murphy said.

Murphy said there were a total of 35 volunteers who helped coordinate the event this year, with about 30 of those being local Friends of the Library helpers, along with about a half dozen others from Rapid City, which included his wife and mother-in-law from Rapid City, along dozens of new sponsors from throughout the Black Hills. Following this year’s record-breaking competitor list, Murphy said a number of people have reached out to him and expressed an interest in either competing or volunteering at next year’s 25th annual event.

“The biggest difference in a really well-run race is the volunteers,” Murphy said. “They help to provide a certain level of comfort to the competitors, especially the first-time racers – which there were a lot of this year – and who may need the extra bit of encouragement or help navigating the course.”