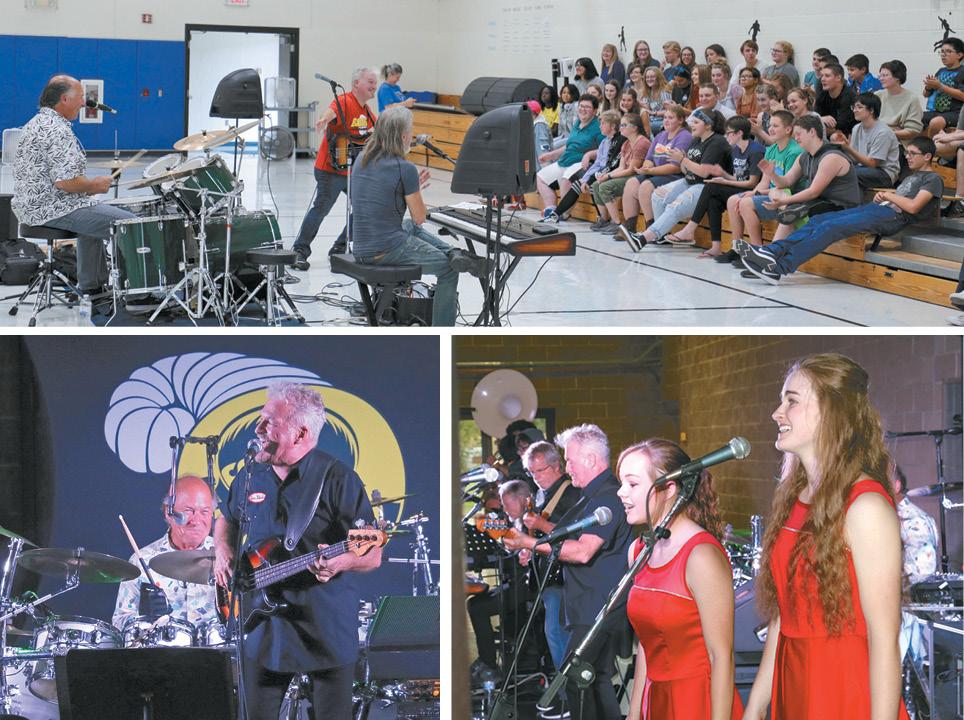 TOP: Hot Springs High School band, choir and drama students were treated to a presentation by some members of the Shells of Time band Thursday.

BOTTOM LEFT: Bandmates Mike English and Craig Katt perform with their band the Shells of Time at the Mueller Center on Sept. 4.

“Joyce had gone to school with some of the band members and when they reached out to us to see if they could recreate the event they had a few years ago to help raise funds for the school, we were so happy to have them come support our fine arts,” said Vande Stroet.

Three of the band’s members – Craig Katt, drums; Mike English, bass guitar; and Rich Schuttler, lead guitar – are all South Dakota Rock and Roll Hall of Fame inductees who began their foray into the musical world while participating in the music program at Hot Springs High School in the 1960s.

“In 8th grade I remember seeing some girls screaming all giddy as they were talking about a show they had seen the night before on the Ed Sullivan Show,” recalled Craig Katt, Shells of Time drummer. “They were screaming about a band called the Beatles. I remember thinking if they go crazy over some long haired group from England, maybe we should start a band; and it worked. We would take the band equipment out of the band room and practice late at night in another room, well, until we got caught by the principal and that was that.”

Yet the group’s passion for music would not be dimmed and they repeated their equipment borrowing technique in college and created Shells of Time; gradually owning their own equipment and amassing a loyal following.

The band began in 1967 and performed throughout the remainder of the 60s and through the mid-70s, playing cover tunes from various rock and country bands.

While the Shells of Time was the main act at the Mueller Center this past Saturday night, the opening act was a brilliant combination of youth talent and seasoned musical prowess as some of the Hot Springs High School musicians were able to play with the group.

This was an opportunity for these youth to embrace the passion of music, the hard work of practice and the rush of performing before a live audience.

“This was an opportunity for them to just have fun,” explained Vande Stroet.

Though the concert was the highlight, the band had much more in plan for the Hot Springs High School band, choir and theater students prior to the concert.

Prior to the concert last Thursday, three of the band’s members, including Craig Katt, Mike English and Randy Crain, shared their talent and music industry and art experience.

The trio set up in the Tays Center gymnasium and introduced the youth to the variety of instruments used to create the sounds they hear in the songs they listen to.

Crain showed the expansive array of musical sounds that could be created on his electric keyboard. From organ to horns, strings to synthesizer and how they can all be layered to create a sound all the artists own.

“My instrument becomes my voice,” said English of his bass guitar. “I feel the notes and how it affects me. Music is who I am; it gave me the opportunity to not be afraid, to be me.”

“Music is a universal language,” said Crain, sharing a story of playing music with an Ecuadorian at Machu Pichu, playing by ear, and transcending language and generational barriers.

“I think it’s a pretty cool opportunity for the students for real live musicians to come and talk with them about the world of music,” said Vande Stroet. “To be able to facilitate something like this, to watch our students try to see what they can accomplish is why I teach. Too many times our kids are afraid to fail, but if they are having fun they can get out of themselves, understand that they don’t have to be perfect they just have to be themselves; it’s amazing.”

The youth were split into two groups, percussion and string, to learn more of that particular form of musical art.

“It was interesting the different things you can do with music,” said Paige Helgeson, 16, of the presentation, “and just where music can take you.”

The trio had advice for aspiring youth artists.

“Learn and enjoy your instrument, have fun,” said English, “if the music is inside you, you’ve been blessed.”

“You are never too old to learn an instrument,” said Crain, “never.”

“Whatever you do, do it with passion and focus,” said Katt. “Never just do something to do it, do something with a focus on achieving. You want to earn your every step in life, you never want it just to be given to you because if it’s just given to you, you never appreciate it as much so never be afraid to excel, and never be afraid to fail. Because with every failure you learn a valuable lesson that you will not repeat the next time.”