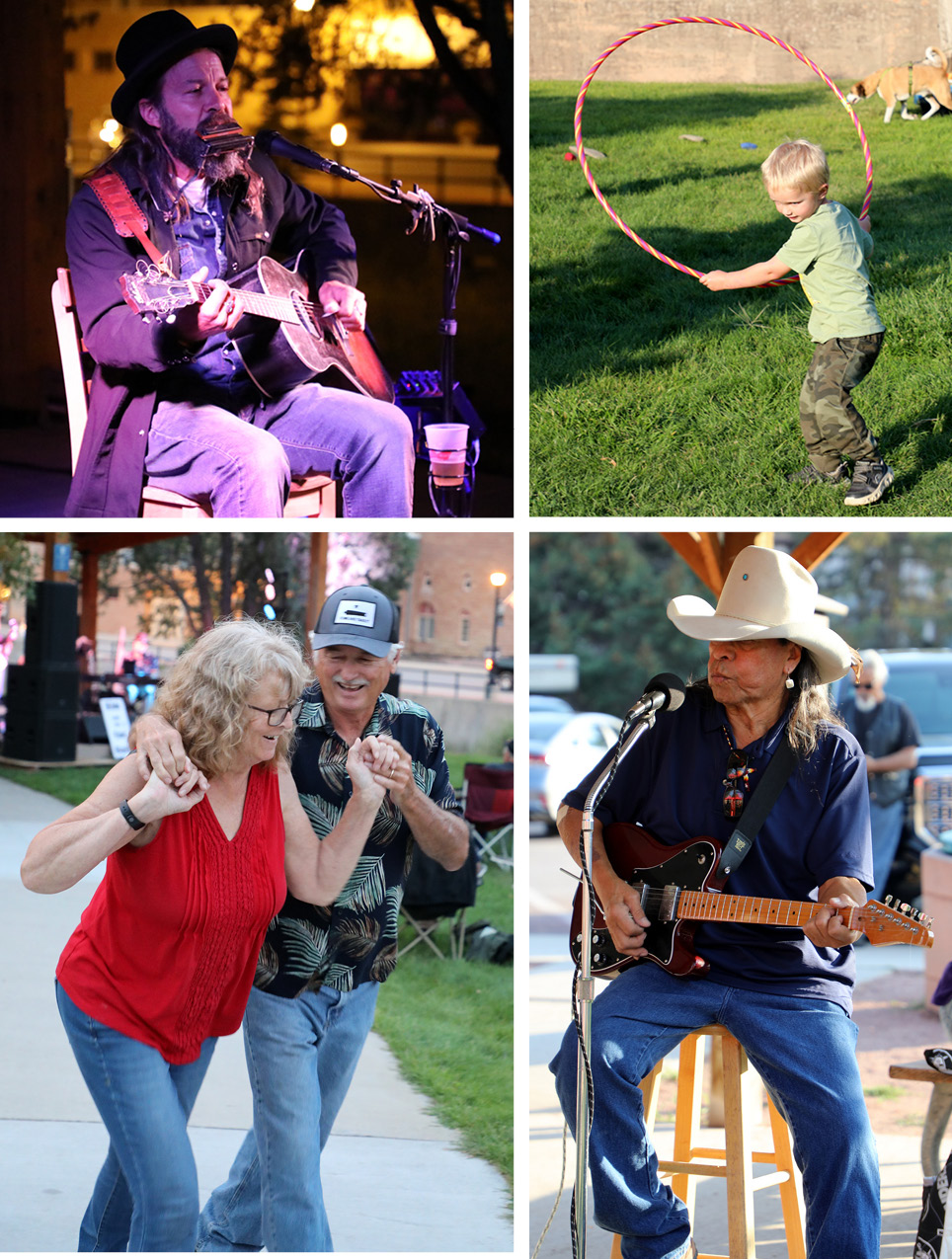 HOT SPRINGS – The 4th annual Music in the Park concert and community potluck held in Centennial Park on Saturday drew large crowds to enjoy the sounds and tastes of summer.

“I like all the games,” said Kendra Zimmermann of Hettinger, who along with her younger brother Brett, 3, and many other children found various ways to entertain themselves in the kid zone with hula hoops, corn toss and other activities.

Food was plentiful as French Dip sandwiches were served up courtesy of Sweet and Sassy along with a variety of potluck dishes brought from attendees. Winners Circle offered beer, soda and water for sale and Two Cows Creamery offered ice cream drinks.

Diners were treated to live music as the first musician of the evening Al Bear performed his own brand of music he calls “Country Blues Lakota”.

The musical fun continued with Kim and the Cueballs on the main stage as the crowd continued to grow and dancers hit the ground swaying to the sound.

“We have been looking forward to music in the park,” said Dave Foster of Hot Springs. “It’s our third year coming and we really enjoy it.”

“We love to dance to Kim and the Cueballs,” said his wife Gayle Rodcay. The couple heads to Buffalo Gap whenever that band is playing there specifically to dance. In fact, that’s how the couple met 21 years ago, on the dance floor. And they are still dancing in love to this day.

As dusk fell the crowd waited in anticipation for the headliner; Jalan Crossland.

“This is the second time we have come,” said Jacquie Schniers of Hot Springs, “and this year we came specifically to see Jalan. Our whole family is fans of Jalan.”

Jacquie’s daughter, Kileyna, is such a fan she and her friend Paul Red Hair manned the Jalan Crossland booth.

“I love doing this,” Kileyna exclaimed, “he is really a nice person, I like his music and he has really good stories that go with it.” She admitted that manning the booth is also just a lot of fun. “I really like talking to people. I meet people from all over the world.”

As Crossland took the stage he didn’t miss a beat engaging the crowd with his love of music entwined with stories. Soon into his set he explained to the crowd that they would “meet some of my dysfunctional family and friends” in the lyrics of his songs with lyrics such as “trailer trash of karaoke, howled like a coyote” having people laughing out loud.

While the evening cooled Crossland kept the heat up with his acclaimed picking, freestyle riffs and lyrical prose.

If you missed this year’s musical event organizer Dusty Pence assures you that a 5th annual Music in the Park is already in the works. To learn more follow their Facebook page at Music in the Park Hot Springs SD.