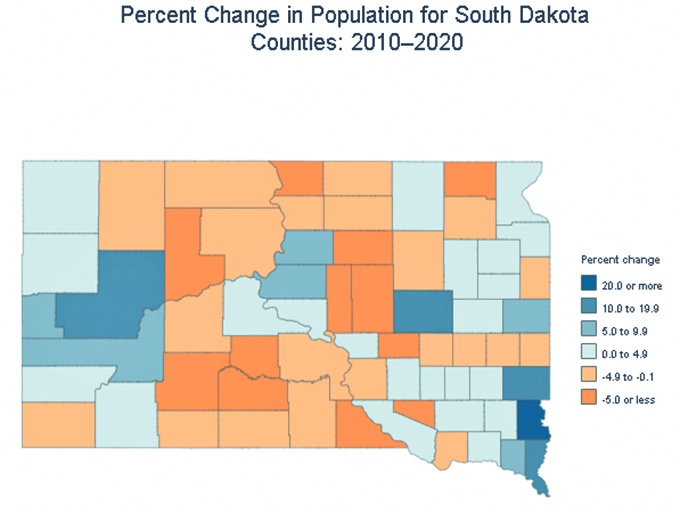 However, numbers may be skewed due to data taken during pandemic

HOT SPRINGS – South Dakota is experiencing an influx of new residents, especially since the onset of the coronavirus.

The United States Census Bureau recently released a portion of the 2020 Census results.

Since the previous census in 2010, the state of South Dakota gained 72,487 new residents and has a total population of 814,180, which represents an 8.9% growth rate over the decade.

This makes South Dakota the 46th populous state out of 50, ahead of only North Dakota, Alaska, Vermont, and Wyoming.

Part 1 of this series featured new residents to the area who have chosen to make Fall River their home simply because they love it here.

In Part 2, realtors based in Fall River explained that they saw a lot of people moving into the area in the past couple of years, especially since the beginning of COVID.

“We started to see more inquiries in March [2020],” said Jim Bultsma, owner and broker of Heartland Real Estate. “There was some initial activity then however the increase in actual sales began in June and has kept pace since then.”

“I couldn’t believe how many people started calling from out of town to find a place to live in Hot Springs,” said Cathy Sotherland, owner and broker of the Real Estate Group.

The new figures also show the following race/ethnicity statistics for the county in 2020, followed by the previous 2010 percentages in parentheses:

South Dakota has 66 counties, and Fall River was one of 33 to lose population since 2010, which reflects a larger trend of rural areas losing residents while cities continue to gain.

According to the Census data, more than a third of the state’s population lives in Minnehaha, Lincoln (both Sioux Falls), and Pennington (Rapid City).

This is nothing new for the city.

Since 1960, only one decennial census reported a population gain within the city limits:

According to the Census Bureau, it is likely that many new residents to the state remained out of the official 2020 Census results due to the census being conducted in April of 2020, about a month or two into the coronavirus pandemic, subsequent lockdowns, and other health and safety measures enforced in different states.

There are potential consequences for uncounted residents.

According to the Census Bureau, the “results of the census help determine how hundreds of billions of dollars in federal funding, including grants and support to states, counties and communities are spent every year for the decade. The results also inform how federal funding is allocated to more than 100 programs, including Medicaid, Head Start, block grant programs for community mental health services, and the Supplemental Nutrition Assistance Program, also known as SNAP.”

However, Dr. Zhang points out that the Census Bureau “does have another program called the annual population estimate program that utilizes vital statistics and other administrative data (such as IRS) yearly to update the population estimates for states and counties.”

Census results aside, there are many new faces in Fall River, and Olivia Mears, executive director of the Hot Springs Area Chamber of Commerce, is excited by all of the interest in the area.

“It’s great seeing all the renewed interest in Hot Springs because with new people comes new businesses and opportunities, and we look forward to continued growth and success in this wonderful town of ours,” Mears said. “Not everyone who moves here has interacted with the Chamber prior to their relocation, so we want new residents to know that we are a community resource and look forward to meeting them. We welcome all Hot Springs residents to contact the Chamber for help with local information.”