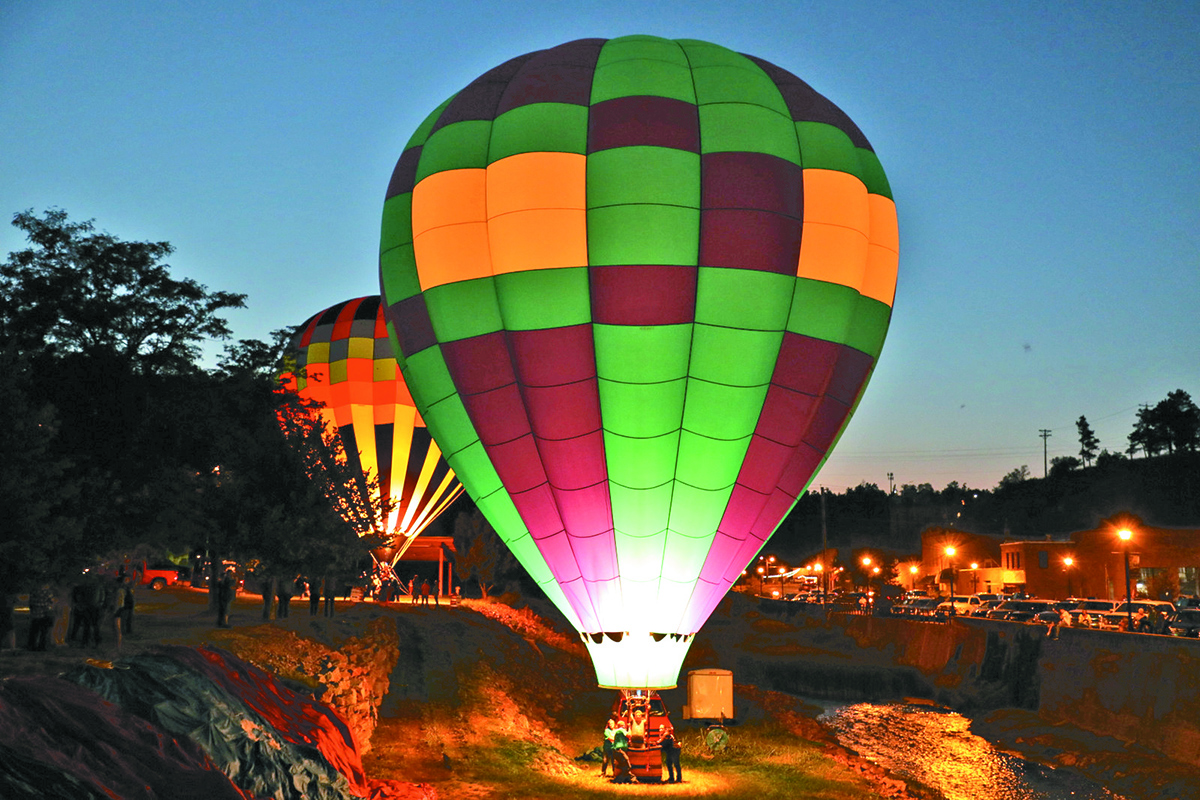 Rich Olstad’s “Billy Bob” glows in the night along the Fall River in Centennial Park, with Rodney Watts’  “The Pollinator” glowing in the background.

HOT SPRINGS – The 6th annual Fall River Hot Air Balloon Festival was one for the memory books as the Hot Springs Chamber of Commerce pulled out all the stops this year creating a full weekend of fun for everyone.

The weekend of fun began Friday afternoon with vendor booths in Centennial Park and the farmers market. As the afternoon cooled live music heated up the night with both Kim & the Cueballs and The Barnflies entertaining the crowds.

The Saturday morning flight of balloons was cancelled due to Mother Nature yet that did not slow the festival’s activities.

The day included both a SHRec 5K run and a Southern Hills Recreation fun run. And for those not donning their running shoes but wanting to enjoy a leisurely stroll through town they were welcomed with music provided by the Chautauqua Craftsmen and Artisans of the Black Hills on almost every street corner set up along the sidewalk chalk art path from Chautauqua Artisan Market down to the Hot Springs Theater.

Art was a core theme throughout town as little artists painted rocks at Chautauqua Artisan Market, children painted planters at Ace Hardware and kids of all ages found themselves a plot of sidewalk to create their own sidewalk chalk art.

“We’ve created this piece in our mother’s memory,” explained Jessica Abbott of her and her sister Jennifer Strait’s chalk mural. “Our mother, Pearl Wilsey, inspired us to love art and we have passed that love onto our children.”

“Our mother was an amazing artist,” said Strait, “she would have loved this.”

“We came to see family and have fun at the festival,” explained Bryan Beier, 7, of Mobridge. “I had a lot of fun in the bouncy houses.”

“We are excited about all the events,” said Christine Phillip of Box Elder. Her son Joey was not shy to admit he was most excited about the food trucks.

And as with any well organized event, fresh food was readily available, from pancake breakfasts at the American Legion to a variety of food booths in Centennial Park.

Butler Park was also abuzz with activity as the Army National Guard provided fun and games for the kids and a mini golf and science zone was provided by the Mammoth Site.

Saturday ended in a beautiful display of balloons lit up at dusk in the ‘Glow Around Town’ event. Pilots set up pods of balloons in Centennial Park, State Veterans Home, Butler Park, The Mammoth Site and the Mueller Civic Center.

River Street and Centennial Park were lined with people staring in wonder at the balloons as they rose against the night sky, some seeming to play games with each other timing their flames to a rhythmic beat.

“This is awesome,” exclaimed Robin Erickson of Gillette, Wyo., “this is such an amazing way to view the balloons.”

“I love it,” said Lidia Inskip of Rapid City of her first experience at the Fall River Hot Springs Balloon Festival, “they are so big, I never had any idea they were so big and they are so beautiful lit up at night; so beautiful.”

Though Bruce Erickson of Gillette, Wyo., was disappointed Saturday when the balloons could not launch he was determined to view it again Sunday. “We came last year and it was amazing, we are here all weekend and will definitely be there tomorrow.”

When Sunday morning came Mother Nature did not disappoint.

Yet, one had to wake early Sunday morning to witness the magic of the mass of hot air balloons ascending into the morning sky as the sun rose to great them at the Hot Springs airport.

As the balloons made their way across the sky the day had only just begun for the balloon crews as the chase ensued.

As balloon pilot Petra Wilson and the 30 plus other balloons from multiple states, their pilots, and guests ascended into the air, their loyal crews began ‘the chase’.

“It’s something like a storm chaser,” explained Wilson’s crew Chief Greg Beery who has been ‘chasing’ Wilson for more than six years. He explained that navigating from the ground can have its own set of challenges with questions ranging from, is this a road? Can we get through here? And the proverbial, where in the world are we?

Beery shared a story of one of his adventures crewing for Petra.

“About two years ago when Petra was competing in the National Competition in Scottsbluff, we could see her about ¼ mile away but didn’t know the area, so using Google maps we tried to find a safe place for her to land. We chased her to what looked like a really good open field to land except it was surrounded by barbed wire, the whole area. There was no way to get in. Petra guided the balloon into a landing into the middle of the field. We hopped the barbed wire (with permission from the neighbors) and started the 100 plus yard hike to the balloon. However, when we walked out to retrieve Petra, we discovered that the field was actually thistle, shoulder height thistle, and I was in shorts and loafers. We literally had to pack up the equipment and trek through that shoulder height thistle to get her out. I never let her forget that adventure,” he laughed.

However, being a crew member has its benefits as Beery and fellow crew member Ken Tonsager get to enjoy balloon rides as room and time permits.

“Basically we crew so we can ride once in awhile,” joked Tonsager.

Yet the crew carries a very heavy and important role in a successful balloon flight.

They not only set up and break down the balloon they also serve in a safety capacity when needed. One such instance could be as a balloon is landing there are variables that exist in mother nature such as wind which can cause a balloon to maneuver to an area not fit for landing. “When that happens we grab a line, get ahold of the launch harness, and maintain the balloon guiding it to a safe landing,” said Tonsager.

Both Tonsager and Beery do not see a future without chasing balloons.

As the chasers were chasing the balloons the activity packed balloon festival weekend came to a close.

“We will come back every year as long as they are having it,” said both Bruce and Robin Erickson of Gillette Wyoming, “I even bought a shirt!” laughed Robin.