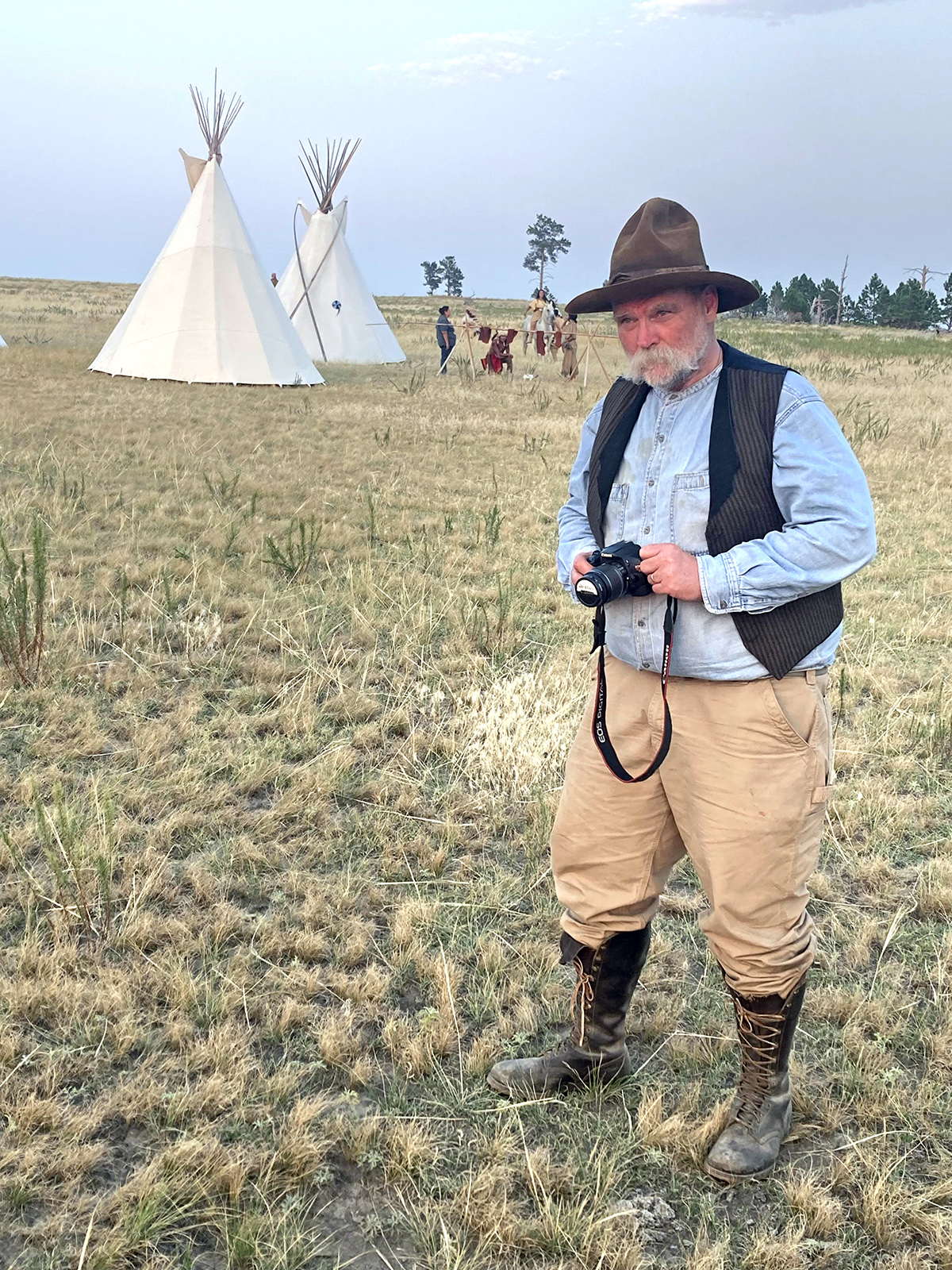 Jim Hatzell, Coordinator for Fiddlers Green Productions Photoshoot, is pictured here on Friday, August 27 at the first day of this year’s event that brings various artists and models together to craft images of the Old West.

EDGEMONT – For two years, an eclectic gathering of painters, photographers, sculptors and other artists has taken place on a ranch off Indian Canyon Road, just outside of Edgemont. This little known event among the locals is called Fiddlers Green Productions Photo Shoot and draws actors and other entertainment industry folks as well to this quiet location for three days of collaboration that provides opportunity for everyone involved.

Jim Hatzell, the coordinator for the event, has been bringing artists together for at least 25 at different locations in the Great Plains from the Dakotas to Kansas.

Kevin Quigley, a Chicago resident recalls growing up with Hatzell on the south side of town. He says that as far back as 1977, Hatzell was organizing gatherings including one on July 7th of that year at 7 p.m. with everyone sipping 777s.

David York of Clermont, Fla., who retired from a career with Disney in animation, attended Artist Ride in Wall, in 1994, another effort of Hatzell that drew models in for painters, photographers, and sculptors to capture in the moment.

John Gawne remembers the 2000 gathering at Shearer Ranch about 20 miles north of Wall on the Cheyenne River.

Hatzell attended the American Academy of Art in Chicago, an institution that has seen a number of renown artists come through its doors over the years. He graduated with a degree in Graphic Art in 1976. He went to work Illinois Central Railroad immediately after graduation, laying commuter track. He was offered a job in New York working for Mad Magazine, but Hatzell found the idea of residing in New York City quite unappealing so he declined the offer.

Hatzell remained employed with the railroad until leaving for Europe in 1978. Quigley joined Hatzell in Europe, traveling through almost every country in the region except for Ireland for two years. Quigley says upon returning to the states, Hatzell instead of flying directly to Chicago instead flew into New York so that he could hop freight trains en route as he made his way westward. The first train he hopped onto was in Harrisburg, Pa., and jumped onto others in Ohio and Indiana. At this point, he hadn’t eaten since leaving New York a couple of days prior. He ended up bumming a meal of handouts from the train yard crew in Indianapolis. His wife was stationed in East St. Louis at Scott Air Force Base and after an extended visit, returned to Chicago and went back to work as a railroader.

In 1980, Hatzell joined the Air Force and was stationed at Ellsworth Air Force Base. His time at Ellsworth allowed him to become familiar with the romantic western landscapes of the Dakotas. Experiences of his youth in Kansas and Colorado on farms of various family members gave him a strong appreciation for what he came to find in South Dakota. After four years in the Air Force, he returned Chicago to work for the railroad again, and was furloughed not long after taking the job. Following a divorce, he moved to Rapid City in 1986 and embarked on a career as a freelance artist, something that had its beginnings back in Chicago where an art store owner with connections had lined up caricatures and advertising artwork.

In September of 1987, Hatzell attended the first Artist Ride at Shearer Ranch. Hatzell knew models that would be excellent subjects, many capable horsemen with their own guns and costumes. In 1997, Hatzell began organizing the Artist Ride on his own, bringing in models and attracting artists for 15 years.

In 2018, Hatzell organized an artist gathering at the Wild Horse Santuary, which Hatzell recalls was a a ‘big hit’. Dayton Hyde, who invited Hatzell to the horse sanctuary passed away later that year in December. The next year, Hatzell was told of a picturesque ranch just southeast of Edgemont by his friend Dan Deuter, who Hatzell had inherited the Artist Ride in Wall from in the 80s. “It’s a lot more work than people would think,” Hatzell says of organizing an artist gathering. Not only must the organizer bring in artists, but must find models that suit the artists’ interests. Some artists want particular subjects to the exclusion of any others. Some want only cowboys, others want only indians, others want cavalry.

One aspect of Indian Canyon Ranch that Hatzell appreciates is the diverse landscape which includes, river bottom, mountain scenery, and high plains. The diversity promotes creativity among the artists that gather here. This year, the response that Hatzell received from many artists was that they wanted to return to the venue, but because of the pandemic some were hesitant to attend. Many of those artists urged Hatzell to keep them on the invitation list for future years and he looks forward to remaining involved with the event for the foreseeable future.