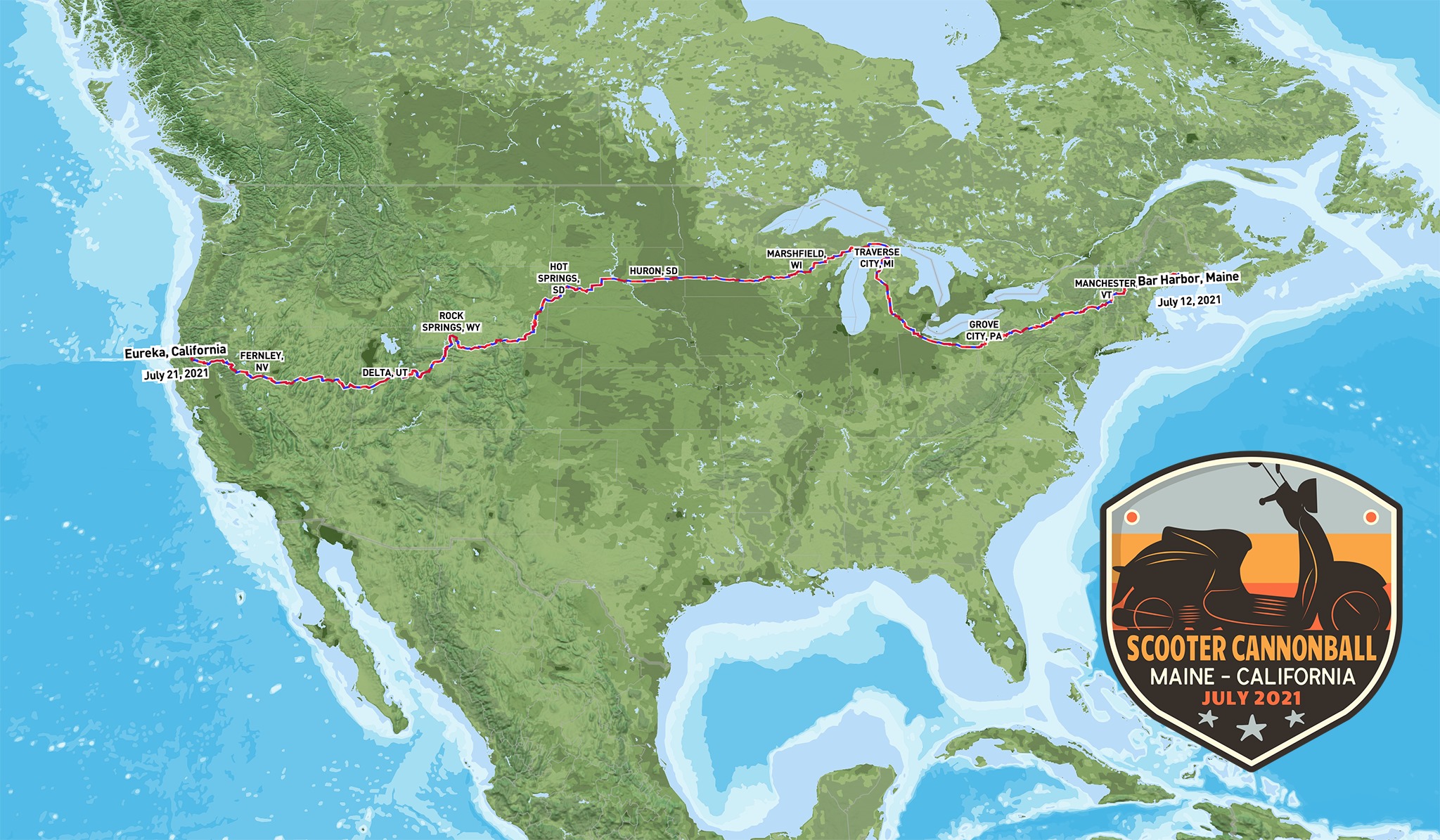 Around 90 participants – riding nothing larger than a single-cylinder 280cc scooter – will be stopping overnight in Hot Springs this Saturday, July 17, as part of the 10-day, 4,500-mile Scooter Cannonball across the United States. To follow along on their progress, check out the website www.ScooterCannoballRun.com.

HOT SPRINGS – With the Sturgis Motorcycle Rally now only about three weeks away, our area’s roadways will soon be filled with motorcycles and the familiar roar of Harley-Davidsons.

But this weekend, the roads in and around Hot Springs are going to be sporting the sights and sounds of different kinds of two-wheeled vehicle … Scooters.

This past Monday, July 12, a total of 89 riders left Bar Harbor, Maine, to travel across the United States, approximately 4,500 miles, to Eureka, Calif., in a biennial event known as the Scooter Cannonball.

According to the website www.ScooterCannonballRun.com, the Scooter Cannonball is a coast to coast endurance challenge for scooters held every two years since 2004. Because of COVID-19, last year’s 2020 event was postponed one year. The previous most recent Scooter Cannonball took place in 2018 and was from Morro Bay, Calif., to Virginia Beach, Va., and in 2016, the event was from Fernandina Beach, Fla., to Mukilteo, Wash.

This event is a test of both rider and machine that takes participants along a preferred or recommended route each day that is defined by “mandatory” checkpoints. Checkpoints are strategically chosen to keep riders off high speed interstates and mostly on the same roads. It is a time/distance/regularity rally where points are awarded based on miles completed and the ability to maintain the standard pace.

This year’s Scooter Cannonball will be coming through South Dakota on Day 5 and Day 6 of the 10-day competition with overnight stops in Huron on July 16 and right here in Hot Springs on July 17.

Stay USA Hotel & Suites manager Steve Frank, whose Hot Springs lodging facility is serving as a checkpoint along the 2021 route, said participants from all over the country started booking rooms with them several months ago. Currently, he said 57 of their 86 units are being rented by scooter riders for the night of July 17.

One of those overnight guests is “rookie rider” Barry Donovan of Vermont, who will be partaking in his very-first Scooter Cannonball this week while riding a 2006 Vespa GTS 250.

When reached by phone last week while on his way to Bar Harbor, Maine, for the start of the Cannonball, Donovan said he was excited embark on his first-time trek across the country, and was especially looking forward to riding through the Badlands of South Dakota and seeing Custer State Park.

Donovan, age 54, said he and his wife had been riding scooters for about six years and got into the practice through their love of camping. He said they found that toting scooters around was a great way to remain mobile and see the sights of the area without having to pick up and move their camper as well. The couple now owns six Vespas.

As their love of touring on scooters grew, Barry and his wife Margot began attending scooter rallies in and around Vermont and eventually heard about the Scooter Cannonball. Despite loving to ride scooters herself, Margot said she did not share her husband’s same desire to travel cross-country on one, and was instead looking forward to some relaxing time on a beach somewhere this week.

Prior to taking off this past Monday on his approximate 4,500 mile coast-to-coast trek, the furthest Donovan said he had ever traveled on his Vespa at one time was 432 miles. That distance is about how far he will again be traveling each day during the 10-day competition.

In preparation for the Scooter Cannonball, Donovan said he spent considerable time making sure his 250cc Vespa was in tip-top running condition, planning his route and getting to know his Garmin GPS and utilizing a Basecamp app.

While a few of the participants in the Scooter Cannonball ride together in predetermined small groups, or have a trailing support that follows along, Donovan said he is planning to start his trek by himself but does foresee getting to know some of his fellow riders and perhaps joining up with some of them at the various checkpoints.

After arriving in Maine over the weekend, Donovan said he was meeting a bunch of new people and was filled with lots of excitement and nervous energy, as he was getting set to attend a “Starting Party” on Saturday night.

For those familiar with the 1981 film ‘The Cannonball Run,’ you may assume that the Scooter Cannonball is also timed race, but according to the event’s website, “This is not a race or speed competition.”

“No benefits, actual or implied, monetary or otherwise are awarded to any rider who finishes with the highest number of accumulated points each day or at the conclusion of the event,” the website states.

Participation is limited to Scooters with an engine displacement less than 280cc. A Scooter is a two or three wheeled vehicle that satisfies at least three of the following conditions:

The Scooter Cannonball uses a handicap system for scoring purposes. The handicap is based on both the age and displacement of the scooter and is normalized to a hypothetical scooter.

Donovan said his Vespa is equipped with a 2.4 gallon fuel tank but he plans to also carry a reserve tank that is 1.25 gallons. He typically gets around 80 miles per gallon, but considering he will also be loaded down with extra clothes and other supplies for his 10-day trip, his fuel economy will likely be less. Vespa also claims that top speeds of their machines are 76 mph, but weighted down with gear and supplies, participants in the Scooter Cannonball will probably be doing less than that between checkpoints.

Following are some other interesting facts about the Scooter Cannonball, according to the event website:

• To be awarded points the rider must provide photographic and/or GPS location data as proof that they arrived at the designated location. The event has created an iPhone/Android app to help collect and verify this data. It is compiled throughout the day and later verified.

• The cost to participate in the Scooter Cannonball depends on personal circumstances and logistics. A rider with a working scooter, appropriate riding gear, and shipping their scooter in only one direction should expect to spend $3,000 to $5,000 to participate. Riders are responsible for arranging and paying for their own accommodations.

For more information, and to follow along to see how each participant is faring in real-time, go to www.scootercannonballrun.com.

On the website, Donovan is listed as racer #31 with the handle “wbdvt”. As of Monday evening, July 12, he was sitting in 10th place out of the 89 participants.