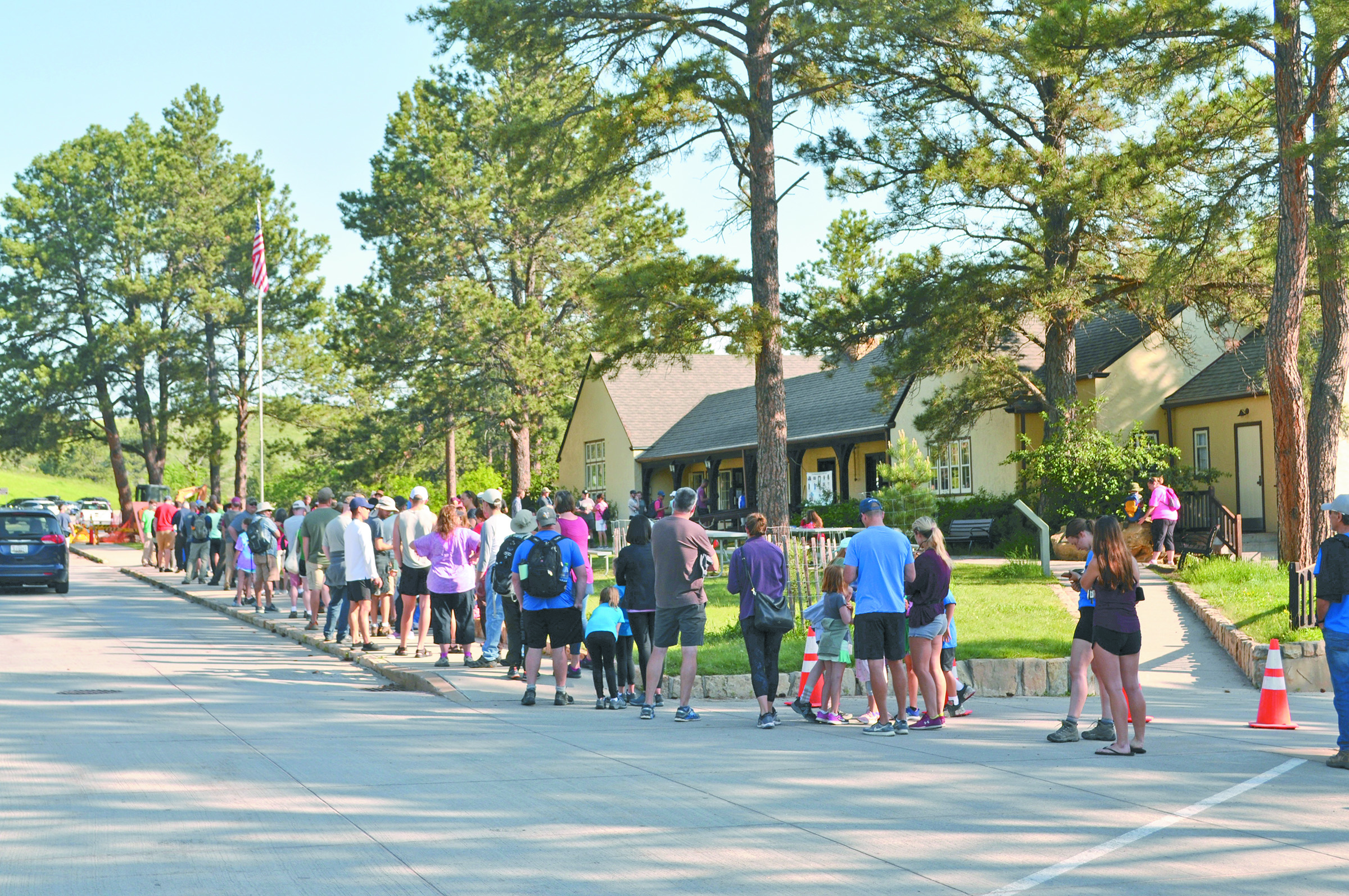 Scenes such as this one are commonplace every morning in front of the Wind Cave National Park Visitor’s Center as patrons line up early to schedule a cave tour, which often sell out.

According to the South Dakota Department of Tourism, hotel occupancy, park visits, airport arrivals, visitor spending, and tax revenue have all increased within the state in 2021 compared to 2020.

“What we are finding is that now, more than ever, travelers have a high desire to explore rural destinations, national and state parks, mountains, and beach destinations,” said Katlyn Svendsen, Global Media and Public Relations Director for the South Dakota Department of Tourism. “This data has proven true as South Dakota has those amenities in spades, and visitors are certainly making an appearance in South Dakota in a big way. Our team anticipates the increased number of visitors to continue, at least into the fall, and likely beyond. Travelers are anxious to get on the road, and they are gravitating toward taking road trips, and our outdoor attractions and amenities are doing better than ever. South Dakota has certainly made its way onto the radar of American travelers and they are enjoying all our state has to offer.”

What the state labels as “park visits,” which includes places such as Mount Rushmore, Badlands, and Wind Cave, have also increased this year.

According to data collected between January and May, Wind Cave National Park is experiencing a 54.3% increase in visitation in 2021 compared to 2020.

“Every morning there are at least 200 people standing in line outside of the visitor center waiting to buy tickets for cave tours,” said Tom Farrell, Chief of Interpretation for Wind Cave National Park. “I’ve never seen that before.”

According to Farrell, cave tours are selling out on a daily basis, with tickets mostly unavailable around mid-afternoon.

“The daily capacity of the cave is 1,100 individuals. The visitor center opens at 8 a.m. and some people are already standing in line by 6:30 a.m.,” Farrell said.

The past two years have been difficult for the national park, as the elevators, which are used to take visitors in and out of the cave for ranger-led tours, became nonoperational on June 29, 2019.

After the first company hired to repair the elevators could not complete the work, the park hired a consultant team and the project went out for bids for a second time. Elevator Repair Service, Inc. out of Houston, Texas, secured the bid, began work in June 2020, and completed the repair work in November 2020.

However, the park was not able to provide cave tours until March 2021 due to coronavirus safety protocols.

“After the past two years, it’s nice to have a lot of people taking cave tours again,” Farrell said.

“We had our best sales day ever in late June…then broke that record three times before the month was over,” said Patty Ressler, BHPFA Executive Director. “This year our sales are 30% ahead of the busiest year we ever had at Wind Cave. Our online sales are also doing well, and are 10% up over last year.”

The Mammoth Site of Hot Springs has also seen an increase in visitation.

“Our visitor count has been absolutely through the roof for this time of year. Since the beginning of June, we have seen numbers that are consistent with mid-July numbers from the past few years (COVID-19 excluded),” said Claire Scarborough, Public Relations Coordinator for The Mammoth Site.

As of June 30, the site saw 24,347 visitors enter its doors since the beginning of the month.

“It’s extremely fortunate, and we’re so happy to see Hot Springs thriving with all of the visitors coming to our beautiful town and seeing what everybody has to offer,” Scarborough said.

The Pioneer Museum has also seen good visitation numbers during its first two months of operation (the museum opened for the season on May 15).

Olivia Mears, Executive Director of the Hot Springs Area Chamber of Commerce, said: “It’s very heartwarming to see such an increase in visitation! We spend a lot of money and effort on marketing Hot Springs and it is rewarding to see it pay off. The uptick in tourism is due to people wanting to travel after last year, and our marketing efforts have an effect on people choosing Hot Springs. The Chamber is able to capture some statistics by having visitors sign the guest book at the Depot Information Center, but bear in mind that with all the digital information, not everyone coming to town stops in at the Depot, so the actual numbers are much higher that what we have recorded.  In June of 2019 we saw 1,822 visitors and this year we recorded 1,998 for June, so we are definitely up in numbers. I think we will see very high numbers this summer and with the Chamber’s Hot Air Balloon festival in August, I believe we will have record crowds.”