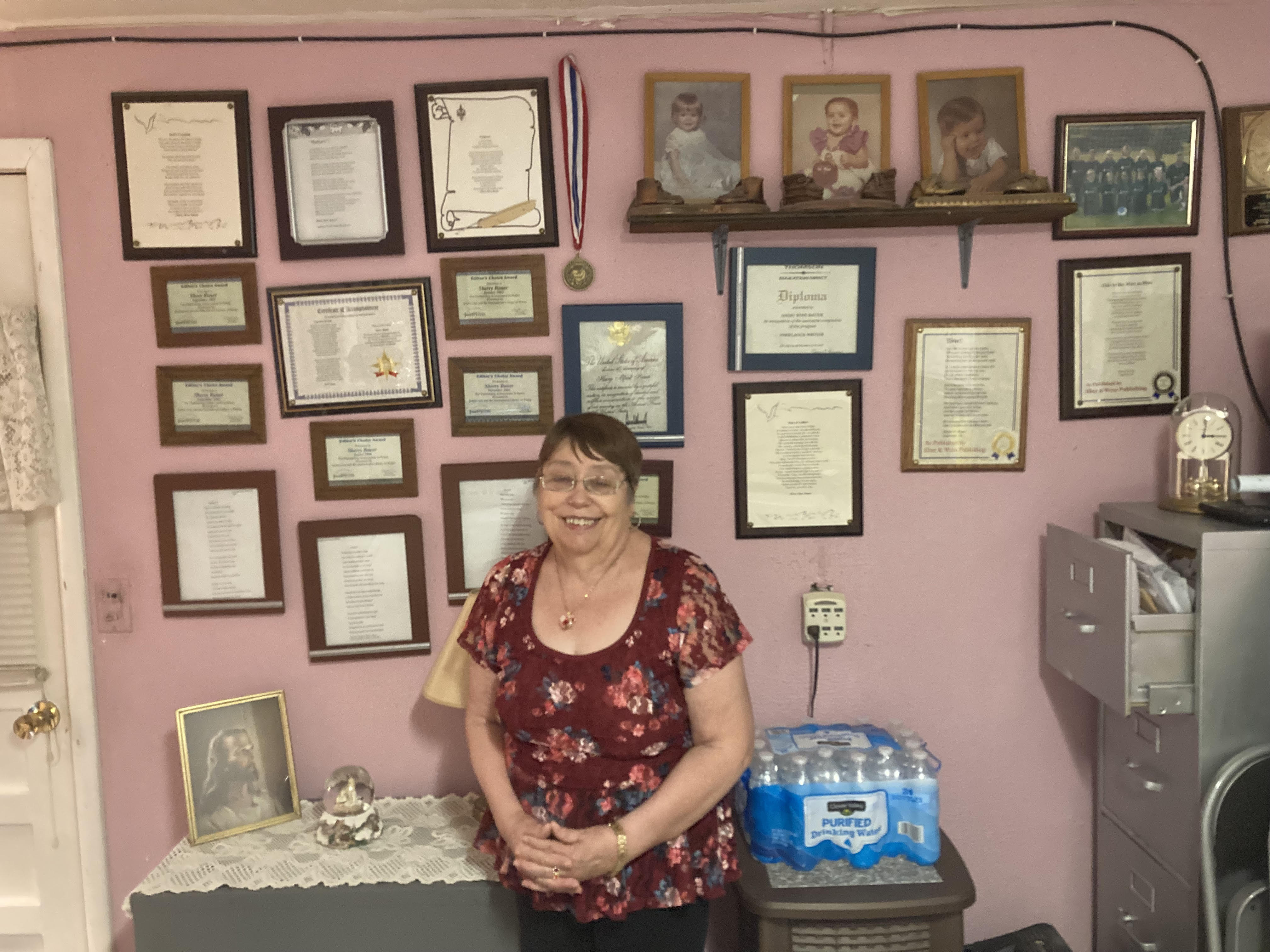 Shery Bauer of Edgemont poses for a photo in front of a wall in her home which features some of the awards she has won for her writing.

EDGEMONT – Edgemont resident Shery Bauer says she has written poetry since she was eight or nine years old. She found any number of things associated with the ranch she grew up on in Bennett County in the town of Martin to be inspirational – farm animals, people, sunsets, and landscapes to name a few.

On more than one occasion, Bauer says she arose in the middle of the night to write something down.

She recalled an incident where her mother’s twin parakeets escaped through an open window where her father had removed the screen and that was just the sort of scenario that could motivate Bauer to write a poem.

As a high school student, she composed an essay based on the theme ‘what America means to me’ during her junior year. Mr. Zane Zeiman, her English and Creative Writing teacher, called her into his office to inform her that her essay had won the district competition. This meant that she had to get up in front of a large audience at the American Legion and read her essay.

At this point in her life, she realized that she was drawn to writing. After several years of working on ranches across South Dakota, Nebraska, and even out in Colorado as a cook for ranch-hands, her husband Hank recognized her talents and paid for her to attend Thomson Education Direct, an online freelance writing school. She obtained a diploma after a period of one year. Afterward, Bauer began composing poems on a regular basis. She found that just as in the days of her childhood, words flowed from her mind onto the page with ease.

Bauer says she began to grow closer to God and creation at this point in her life, a period that began in the early 2000s. Her husband Hank shared her strong faith and was himself a source of inspiration with the songs he wrote and played on his guitar. Bauer says he played entirely by ear, never using written music.

Bauer shared that her husband’s health began to slowly decline as a result of back injuries he sustained working as a mechanic in a bus garage. Watching him take on a stooped over posture and eventually have difficulty walking was extremely difficult for Bauer. After 14 years of continued decline he collapsed in the bathroom. Bauer transported him to Hot Springs where he was admitted to the VA Hospital and spent two weeks before being transported to the State Home where he died two weeks later. His death occurred on his birthday, only minutes prior to Bauer’s arrival that day.

Bauer says the last two years she has spent mourning the loss of her husband and has had little zest for writing. Recently though, the creative juices have began to flow again, something she attributes to her return to the church community. Her fellow church members and pastor have lifted her spirits and provided a source of motivation. She credits pastor Todd Olsen with bringing her through her period of grieving and now Bauer is able to once again experience words flowing with ease onto the page.

In the near future, Bauer expects to compose verse that was motivated by experiencing Covid-19. As with so many other life experiences, surviving the virus has provided a source of inspiration as she feels that she was ultimately spared for a ‘higher purpose’. Her desire is to compose verse that will bring others more in touch with their own experiences gleaned during the pandemic.