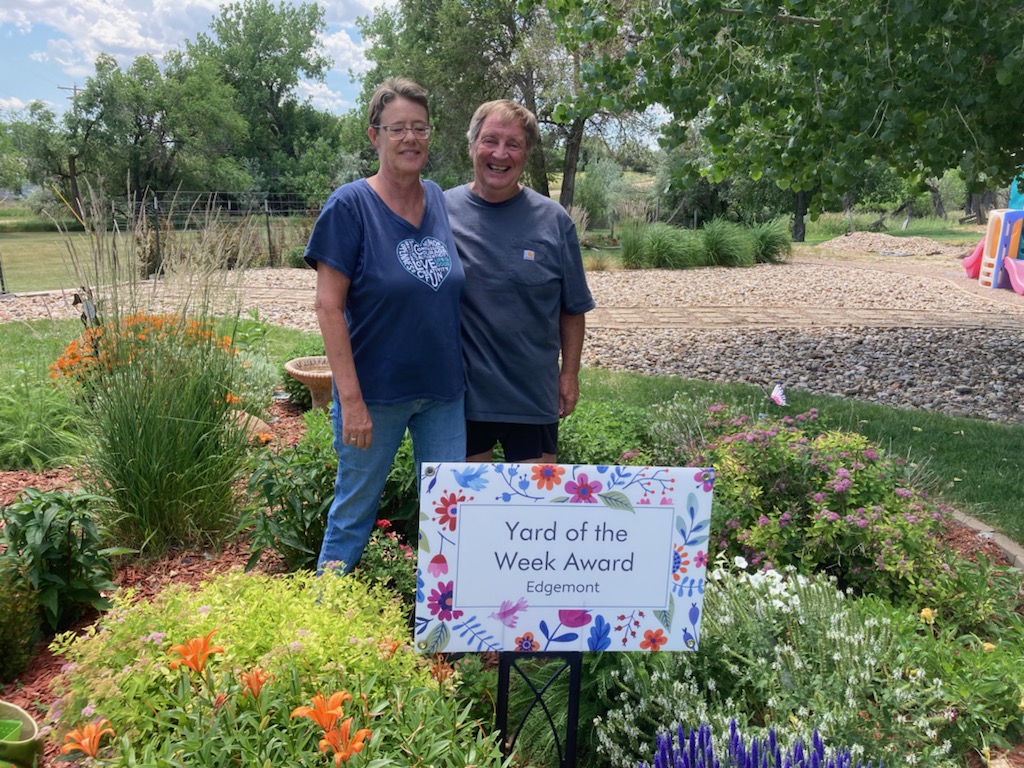 Pictured is Edgemont's most recent Yard of the Week winner, Joe and Echo Brosmire at 1210 3rd Avenue.

EDGEMONT – Edgemont resident Sue Michalek had an epiphany earlier this spring. She thought that it would be nice to highlight some well-cared for lawns and yardscapes in town. She says the motivation was partly due to all of the work her husband John has put into their yard and noticed that other community members were investing a great deal in theirs as well.

“I wanted to recognize and encourage the positive efforts of some families in the community to make their homes beautiful,” explained Michalek. “I bought the sign and selected Two individuals who had lived in the community for many years as the judges. I haven’t planned beyond the summer program, but holiday decorations may be an idea. Three families have been selected so far, hopefully up to 20 or 25 yet to go. It is so easy to be positive. I look at the track and field project, the 4H garden, the flowers on Main Street. We all can make a difference a little bit at a time.”

Concerned that her short duration as a community resident might not make her the best candidate to make the weekly selection, she decided to seek the assistance of more long-term fixtures to help with the task. She encountered Mary Hollenbeck and Darrell Dutoit who were out on their usual morning walk and approached them with the idea of serving as judges, an offer that both immediately embraced. Michalek felt that both would be excellent candidates given their lengthy residential history in the community.

For the past month, a different yard has been selected each week. Mary and Don Kellogg were the first selection, followed by Mark and Rachel Crase. Last week, Tim and Kathy Hansen were selected and this week it is Scott and Teresa Schumacher.

According to Michalek, there is no ‘hard and fast criteria’ that is used in the selection process other than a well-kept yard with some eye-catching attributes such as decorations, flowers, or fences with an artistic flare. She looks forward to future selections and an opportunity to give a nod to those who go above and beyond to promote a pleasant appearance in town.