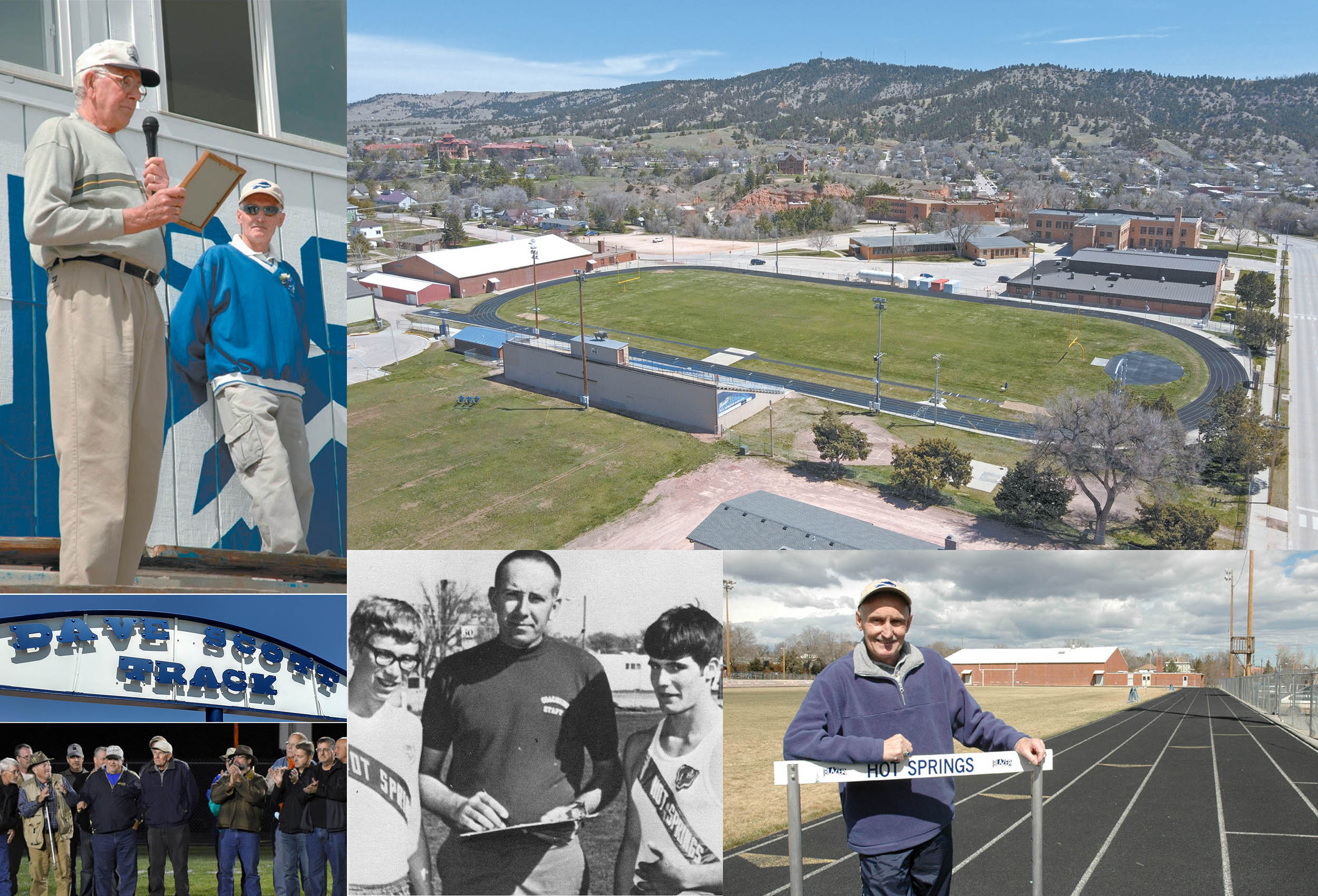 UPPER RIGHT: With his latest ‘Naming Writes series’ story, author Marcus Heerdt has now featured all four of the venues at Hot Springs High School which are named after prominent former Hot Springs students, administrators or coaches. In the far left of this aerial photo is the Case Auditorium, named for former Hot Springs Bison and U.S. Senator Francis Case. The center of the photo showcases Woodward Field named after Superintendent H.R. Woodward, which is surrounded by the Dave Scott Track who is featured in this story. On the right side of the photo is the Tays Center, which was dedicated and named for Jim Tays who is also featured in this story. (Photo by Eric Boyd/Fall River County Herald-Star)

ON RIGHT: At a dedication ceremony held prior to the Southern Hills Track Invitational on April 8, 2005, Jim Tays, pictured on left with his longtime friend Dave Scott in the background on right, reads a proclamation officially naming the Hot Springs School track “Dave Scott Track at Woodward Field. (Photo by Brett Nachtigall)

Publisher’s Note: This story about Jim Tays and Dave Scott is the next in an ongoing series of stories by the Fall River County Herald-Star to highlight the history of the people behind the names of many of our county’s buildings, landmarks and attractions.

“It’s quite an honor (to have a building named after me). That doesn’t happen very often,” Tays said in a phone interview.

A native of Gettysburg, S.D., the 6-foot-4 Tays was a “versatile two-sport” high school athlete with an “exceptional leaping ability.”

Tays participated in basketball and track at Gettysburg High School and was a “two-time state champion in the high jump who set a state record when he cleared 6-foot, 3 ½ inches.”

Quinten D. Hofer, who grew up in Hot Springs and currently lives in Cedar Rapids, Iowa, remembers his father talking about Tays as a high school athlete.

Following high school, Tays attended the University of South Dakota in Vermillion where he also played basketball and high jumped.

While in college, Tays was a member of the Army ROTC and after graduation, was stationed in Alaska and Washington.

Tays met his wife, Cecile, a nurse, while stationed in Washington. The couple decided to move to Hot Springs in 1960.

“The best decision we ever made was to move to Hot Springs,” Tays remembered.

Tays served as a social studies and physical education teacher, administrator, and coach until his retirement in 1997.

In 2016, Tays was inducted into the Hot Springs Bison Athletics Hall of Fame. His HOF biography reads:

“During his long and successful tenure at Hot Springs High School, Tays coached basketball for three years before becoming athletic director and track head coach. His Bison track teams won the Black Hills Conference five times and also featured 18 individual state champions. As Athletic Director, he was a part of the school’s advancement from three sports for boys to what is now seven activities for both boys and girls following Title 9 requirements.”

“What I enjoyed most about teaching and coaching in Hot Springs was the association with the other coaches and with the kids. I enjoyed working with and watching the kids grow and mature over time and helping them along,” Tays said.

Hot Springs resident Gerald Collogan, who is also a member of the Hot Springs Bison Athletics Hall of Fame, participated in cross country and track in high school and was coached by Tays.

Gerald was a member of the inaugural Hot Springs cross country team in 1970 with Tays as the coach.

“Coach Tays was a fantastic coach and very sincere about the athletic programs and the track itself. Before a home track meet, he would get up very early in the morning and spend hours lining the track with feldspar chalk. He really wanted to make our home track shine,” Gerald recalled.

Quinten D. Hofer added: “Coach Tays developed so many athletes over a long span. He created so many state champions and so many that went on to have college athletic careers.”

Tays, who still resides in Hot Springs, is still active in his community and is a member of the American Legion, Lions Club, and Knights of Columbus.

Speaking about her father, DeeDee Tays Johnson of Rapid City, said, “My father was a great coach and his students meant a lot to him. He and my brother and I are honored that a building at the high school was named after him. It is so nice to know that his contribution to the community will always be remembered.”

April 8 was proclaimed “Dave Scott Day” not only in the City of Hot Springs by then-Mayor Carl Oberlitner but also across the entire state by former Gov. Mike Rounds.

After graduating high school in Timber Lake, S.D., Scott attended Dakota Wesleyan and Northern State universities before beginning his teaching and coaching career. Also during this time Scott met and married his wife, Nancy, in 1967.

After teaching in Minnesota and at Ellsworth Air Force Base near Rapid City, Scott moved to Hot Springs in 1971.

In an interview with the Hot Springs Star in 2005, Scott was asked what has kept him coaching for so many years.

“I just really like to see kids make themselves better and show improvement. And they don’t have to be a state champion either for me to enjoy helping kids to improve,” Scott said.

Scott is a member of the South Dakota High School Coaches Hall of Fame and was inducted into the Hot Springs Bison Athletics Hall of Fame in 2016.

“Dave Scott was a fixture at Hot Springs High School from 1971 until his death from cancer in December of 2005. During his 33-plus years at HSHS, Scott served as head coach of wrestling, cross country and track, amassing a combined 14 BHC championships, 23 region titles and five state championships.”

An active citizen of Hot Springs, Scott was a member of the Masons and the United Churches. He could be regularly seen golfing, fishing, boating, camping, jogging, and generally enjoying “everything that life had to offer.”

Jonas and Mary Weiss, who attended HSHS and later worked in the school district for more than 20 years but currently reside in Colorado, were both well acquainted with Scott.

Jonas participated in track and wrestling in high school, and also ended up coaching wrestling himself with Dave Scott as his assistant coach and athletic director.

“For me, Scott was a great coach and an even better mentor. Scotty just knew kids so well and knew how to motivate them,” Jonas said.

Scott was Mary’s cross country and track coach through middle and high school.

“Dave knew his athletes very well. He took me under his wing and helped and supported me through everything,” Mary said.

Toward the end of her high school career, Scott also helped Mary choose which college would be the best fit for her.

“I was receiving invitations to run cross country and track at big universities but Dave knew I needed to be at a smaller college,” Mary remembered. “He took me to a college visit at Northern State University in Aberdeen where he knew all of the coaches there. And that is the college I attended.”

After graduating from college, Mary came back to Hot Springs and served as athletic director, with Dave Scott being one of the coaches of who she was in charge.

“When students and athletes came back to visit their hometown after graduation, Dave Scott was the one person that everyone wanted to talk to. He was a great mentor and a great guy,” Mary said.

Scott’s son, Barry, currently resides in Wyoming and had this to say about his father: “Dad had many opportunities to leave Hot Springs and go to different areas, but he always thought that Hot Springs was the best place to stay and raise kids.”

In high school, Barry participated in wrestling, cross country, and track and had both his father and Jim Tays as coaches.

“Both dad and Tays were common fixtures at school. It was fun to be a part of that and have them both as coaches. I looked up to both of them.” Barry said.

Scott’s daughter, Marianne Drobny of Rapid City, summed: “You think about him and you just want to smile.”