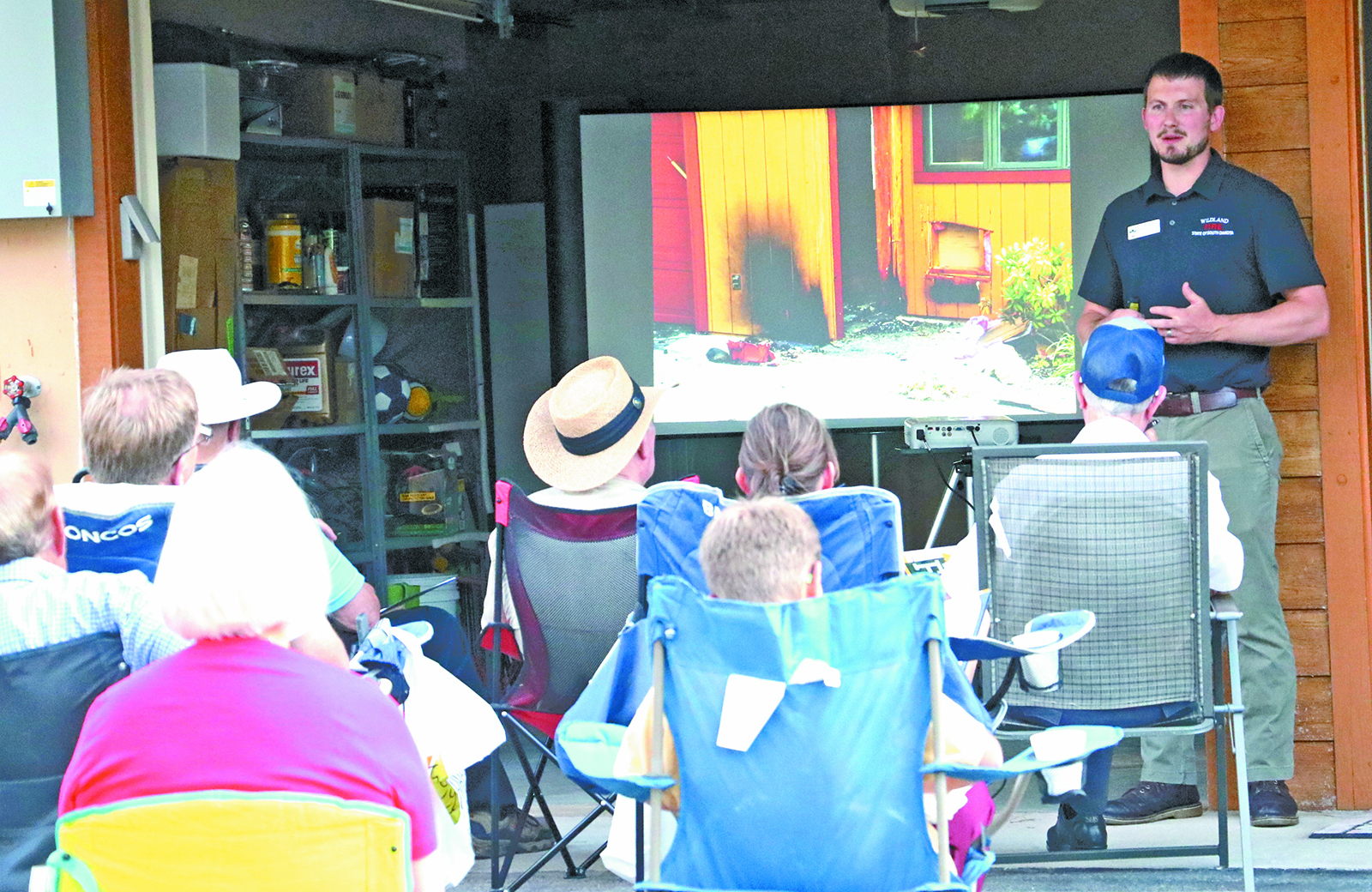 Wildland Urban Interface Specialist Logan Brown speaks to a group of about 10 homeowners in the Country Club Estate housing development, located just two miles south of Hot Springs, during a recent Firewise informational meeting at the home of William and Anna Shulaw, held on June 10.

HOT SPRINGS – Anyone who has ever started a campfire knows that it’s difficult to ignite by simply placing a log in the grate, setting a match to it and expecting it to go ablaze. Getting the log to start on fire takes a little more effort, which usually includes first starting a few smaller fires with pieces of kindling, paper, cardboard or other things which burn more easily.

Comparing that to your home, it’s also unusual for a wildfire to burn right up to your house and consume it like the match to the log –– that is, unless there are a number of smaller fuels nearby which can ignite more easily from a blowing ember and then ultimately overtake your home.

That was the message shared by representatives from South Dakota Wildland Fire at a June 10 homeowners meeting in Country Club Estates, located about two miles south of Hot Springs off Hwy. 71 (Cascade Road).

The residents there, led by homeowner William Shulaw, recently certified their housing development as a Firewise Community, which is a program of the National Fire Protection Association and supported locally by South Dakota Wildland Fire.

The educational program helps property owners take an active roll in defending their homes from wildfire, oftentimes by taking some very simple and low-cost measures.

Wildland Urban Interface Specialist Logan Brown of Rapid City, who conducted the homeowners meeting along with Lane Ostenson of Edgemont, said that homeowners often feel helpless when it comes to defending their home from an oncoming wildfire. But that is not the case, especially when they and their neighbors team up to become “firewise.”

Communities certified in the Firewise USA™ Program are those that have taken appropriate measures to become more resistant to wildfire structural damage. Firewise techniques include minimizing the risk of home ignition by carefully landscaping around residential structures such as thinning trees and brush and choosing fire-resistant plants, selecting ignition-resistant building materials and positioning structures away from slopes.

In addition, communities that have earned the special distinction of being recognized under the Firewise USA™ Program have followed a systematic approach to organizing and implementing a Firewise mitigation plan in their neighborhood.

According to NFPA website, research around home destruction vs. home survival in wildfires point to embers and small flames as the main way that the majority of homes ignite in wildfires. Embers are burning pieces of airborne wood and/or vegetation that can be carried more than a mile through the wind can cause spot fires and ignite homes, debris and other objects.

There are methods for homeowners to prepare their homes to withstand ember attacks and minimize the likelihood of flames or surface fire touching the home or any attachments. Experiments, models and post-fire studies have shown homes ignite due to the condition of the home and everything around it, up to 200’ from the foundation. This is called the Home Ignition Zone (HIZ) which is divided into three zones: the Immediate Zone, the Intermediate Zone and the Extended Zone.

The “Immediate Zone” includes the home and the area 0-5’ from the furthest attached exterior point of the home; defined as a non-combustible area. Science tells us this is the most important zone to take immediate action on as it is the most vulnerable to embers. Simple things that property owners can do in the immediate zone include keeping clean roofs and gutters of dead leaves, debris and pine needles that could catch embers.

According to Ostenson, this is one of the first things a wildland firefighter will do to a home when they arrive to provide structure protection, which is why their trucks are oftentimes equipped with a high powered leaf blower to quickly clean out a home’s gutters.

The “Intermediate Zone” is 5-30’ from the furthest exterior point of the home and is where employing careful landscaping or creating breaks that can help influence and decrease fire behavior.

The “Extended Zone” is 30-100 feet from the home, but in the case of many homes in the Black Hills due to terrain, this can be as far as 300 feet. The most important thing here is in choosing landscaping that doesn’t eliminate fire but instead interrupts the fire’s path and keep flames smaller and on the ground. Brown pointed out that this zone often includes one’s neighbor’s property and not their own, which emphasizes the importance of “firewise” efforts being undertaken by the entire community – and not just a single or a handful of property owners – for it to be effective.

Country Club Estates’ certification in the program became official on Nov. 30, 2020, and made them one of only nine housing developments in all of the Black Hills – and the only one in Fall River County to earn the notoriety.

Others in the Black Hills include Canyon Rim Ranch and Silver Star Subdivision in Custer County; Edelweiss Mountain Improvement Association, Chapel Lane Village and Silver City in Pennington County; and Spearfish Canyon, Mountain Plains I and II, and The Woodlands of Spearfish in Lawrence County.

In an effort to reduce the housing development’s risk of a catastrophic fire, Shulaw said that he and fellow Country Club Estates property owner Bob McCarthy each started independently looking into available programs to conduct a tree thinning operation in their community. Their searches led them to the South Dakota Wildland Fire office in Hot Springs where they met both Brown and Ostenson who said that there might be federal grants available, but a risk assessment would need to be done.

Once that was performed, it was determined that Country Club Estates – which contains just over 30 homes – would qualify for federal grant program valued at $300,000 that would help manage the fuel load concerns of the area. This tree thinning effort would then begin the steps towards fulfilling the Firewise USA certification as well.

Brown then gave a presentation to the property owners in October 2018, where they could commit to the Firewise program and allow contracted wood cutters to come onto their property. The tree thinning then commenced in the fall of 2019 and continued into the summer of 2020. Thus far, around 167 acres have been thinned – at no cost to the property owners – with only about 20 acres remaining to be thinned as part of the grant program.

While the tree thinning effort helped kicked off the Firewise program, it’s far from the only thing needed to maintain the certification. Property owners who enrolled in the program agreed to a 10 year commitment of following the Country Club Estate Action Plan, which was put together by a panel of their fellow community members, along with guidance from South Dakota Wildland Fire, with an overall goal of becoming not just “firewise” but “fire resilient.”

Brown with SDWF said the recognition program is an ongoing process, which the community of Country Club Estates is well on their way to fulfilling. Some of the things which Country Club Estates and it’s board (Shulaw, Rich Nelson and Eugene Nachtigall) has done includes the Wildfire Risk Assessment, Action Plan, Educational Outreach and Risk Reduction Investment (tree thinning).

To maintain their status, they must annually continue educational outreach programs, similar to the event held at the Shulaw home earlier this month, along with individual Risk Reduction Investments which equal at least $25.43 per household, or one volunteer hour per household.

These “Risk Reduction Investments” can include a wide variety of things, from upgrading to more fire-resistant decking materials, cleaning out the gutters of one’s home or organizing a community-wide effort to chip or haul away debris or fallen timber.

In addition to the annual community-wide efforts required, there is also a review performed in three years and again in five years. Brown acknowledged that at the five year mark is when interest in the program often tends to begin to wear off, which is why it is important for the volunteer board to remain diligent in keeping their fellow neighbors informed and a part of the process.

Brown said that in addition to the Firewise program being a good investment on the part of property owners to protect their homes, the greatest reward in being a part of the program is the sense of community that it can bring to a housing development as it brings together neighbors with a common goal.

For more information about the Firewise Program, and to possibly bring it to your community, contact Brown at 605-394-2584. Or check out the website www.nfpa.org and search Firewise.