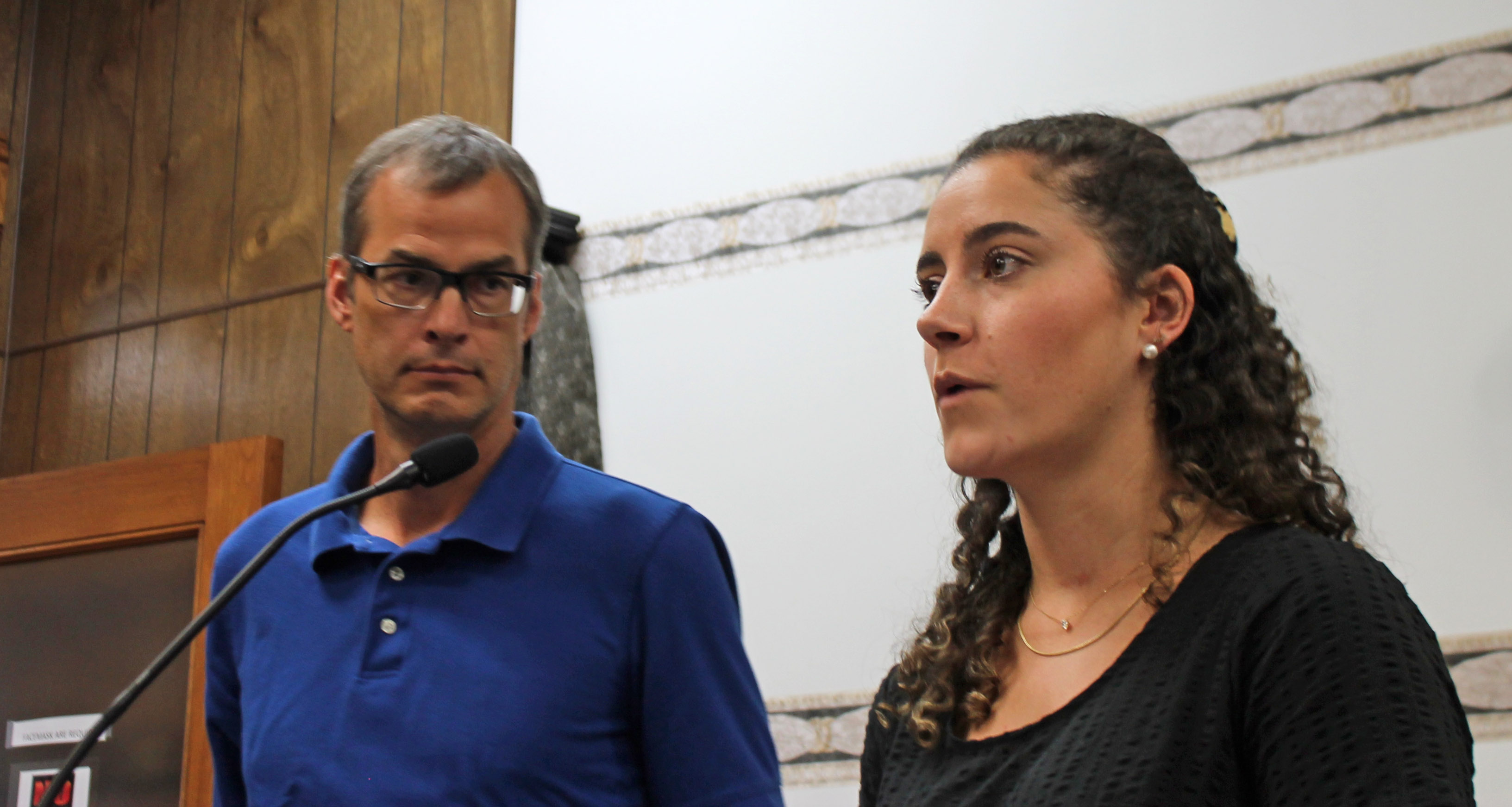 Bailey Plummer, who is vice president of investments for Greenbacker Renewable Energy Company, talks to the Fall River County Commissioners trying to assure them that the company will have finances to back the project and will maintain the site. Philip Watkins, who is development manager with Chabernot Energy of Colorado, looks on. Also speaking to the commissioners was Sioux Falls attorney John Taylor who said that the solar farm production tax will benefit the county's school districts and the county as a whole. All the money will go to the schools for the first five years.

HOT SPRINGS – Solar energy was not a light subject for the Fall River County Commissioners, when they met on Thursday, June 17. The commissioners wanted to know who will be responsible for cleaning up the equipment and modules if the solar farm should go defunct. Present at the meeting to help answer the commissioners’ questions were Sioux Falls attorney John Taylor, Greenbacker Renewable Energy Company vice president of investments Bailey Plummer and Chaberton Energy Development Manager Philip Watkins from Denver, Colo.

“We don’t want to be stung,” said Commissioner Joe Falkenburg. “We’re not sure who will clean up. We’re responsible for the people who live here.”

The solar farm will be built in eastern Fall River County near Oelrichs. The facility will be spread over about two sections or about 600 acres with considerable infrastructure designed to capture solar energy and transmit the energy via adjacent Black Hills Energy power lines. The commissioners’ concern is that the decommissioning of hundreds of acres of solar infrastructure would be expensive, and the cost would be prohibitive for Fall River County landowners if it is not completed by the solar company or secured by some kind of financial arrangement.

Plummer said the project is partly funded by the government and by about 100,000 investors. “Greenbacker bought the land and backs the project by getting backers,” Plummer said.

“The solar farm will be here 35 to 40 years minimum,” Plummer said. “We will maintain it and help keep up the road.” She said that if Greenbacker does not clean up the area, the Department of Energy and Natural Resources (DENR) will clean it up. Commissioner Joe Allen responded to by saying that the DENR still has not cleaned up an old uranium site near Edgemont.

Susan Henderson of Edgemont, who was in the audience, asked, “What kind of things could happen to the equipment to make the DENR come in?” To which Plummer explained that hail could damage the modules, so they would need to be replaced, and cattle could rub against the modules and damage them.

Plummer said the Public Utilities Commission will have oversight on the operations of the project all the way through.

When Commissioner Allen said bonding should be a requirement, Russell said the commission does not have authority to require a bond.

Plummer said the project is now going into bids to local contractors. “We will break ground this fall,” Plummer said.

After discussion, the commission decided to table action on the solar farm agreement until July 1 to give Russell time to work on an agreement with the Greenbacker company.