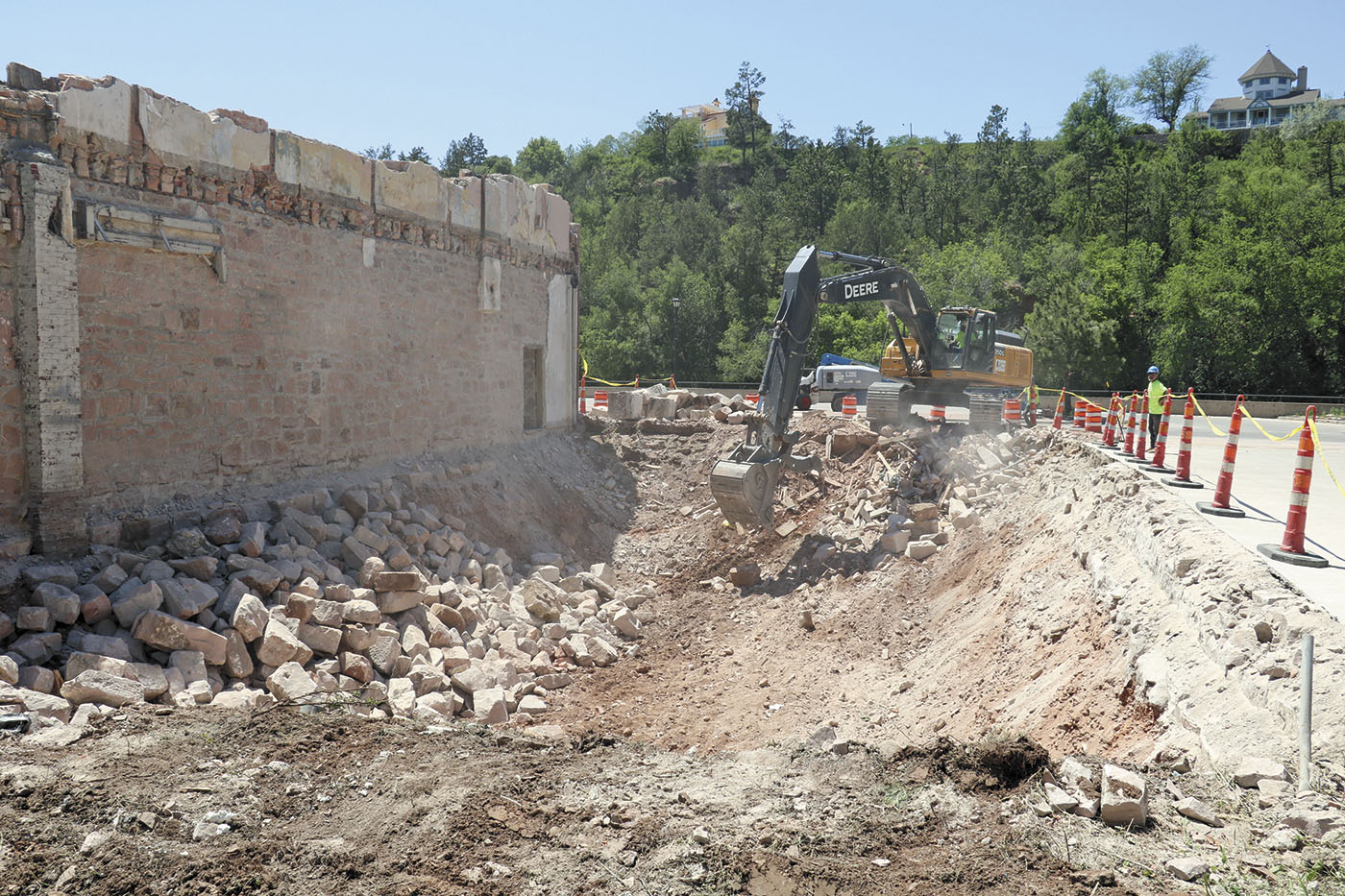 HOT SPRINGS – “I believe that you guys are really lucky that this building didn’t collapse in the last 15 years.”

Those were the words spoken to the Hot Springs City Council by RC Scull, who is the President of RCS Construction, the company which recently performed the demolition of the Wesch-Oak building which collapsed shortly into the start of the demolition operation on the morning of Wednesday, June 9.

“To see what we saw that day was due to how it was undermined, how the foundations were undermined. I think you were really lucky,” Scull repeated.

Prior to Scull coming to the microphone during this past Monday night’s June 21 council meeting for a planned agenda item to discuss the Wesch-Oak demolition, Mayor Bob Nelson gave a brief recap of why the city decided to demo the building based on four different engineer reports from 2006 to 2020 which all indicated the dire state of the building.

When it was time for him to speak, Scull said his company’s goal all along in regards to the demolition of the Wesch-Oak building was safety – for their employees, for the citizens in the area and for the nearby building – and with a fourth objective to save as many sandstones as physically possible.

“And I believe we accomplished all four of those,” Scull stated, adding that they had salvaged over 150 sandstone blocks.

To emphasize his company’s expertise in the area, Scull said RCS does 10 times more demolition work than any other West River company. He added that in preparation for the demolition, five of the six RCS partners visited the site multiple times and also spent many hours analyzing the four previously performed engineering reports about the building.

Those engineering reports, which both he and Mayor Bob Nelson read highlights of during the council meeting, were performed in 2006, two in 2013 and another in 2020, by three different engineering companies.

The most recent report done by Albertson Engineering stated: “It is in our opinion that the recommendation stated requires urgent action. The entire building structure of 717 N. River Street is unsafe and in danger of eminent collapse. There is no way to predict the timing of such collapse and collapses can be catastrophic and occur without any warning.”

“We dodged a bullet,” said Councilman J.R. Huddleston, to which Scull responded, “Over the last 15 years you dodged a bullet. The City of Hot Springs was lucky you guys don’t have a huge liability of someone getting hurt.”

After being asked to describe what happened shortly into the start of the demolition operation, Scull said, “On the morning of Wednesday, June 9th, upon removing the first two courses of sandstone block, the wood beam, running west to east bearing a lot of the weight of the second story, and the roof being severely compromised, we believe fell, causing two-thirds of the front west face wall to fall in above the steel I-beam,” Scull said.

“With the way it fell in on top of itself, and the base course below, where the excavator was sitting, the Superintendent Wes Hall did what he thought was in the safety of everyone’s best interest and that was to get the building down as quickly as possible.”

When asked by Councilman Dave Burris what his opinion was regarding the two proposals submitted by private individuals who had offered to save the building by reinforcing the walls from the inside, Scull responded by saying, “I think they would have killed themselves.”

“My superintendent, who has done this over and over repeatedly, on up to million dollar demolition projects, was pretty shaken on the way that building came down,” Scull said.

Following his presentation, most all members of the city council expressed their personal appreciation for the work RCS Construction did and the care they put into making it a safe operation.

Mayor Bob Nelson then brought up how deteriorated the mortar was between the sandstones blocks.

“The mortar is so deteriorated that you can crush it between your hands, which you should not be able to do. It’s almost like sand,” Scull said.

Later, in addressing the public at large, Mayor Nelson said, “I hope you recognize that this was not a rush to judgement. This was not ‘the building is getting in our way, we need to get rid of it.’ It was simply recognition based on the engineering reports that we had available to assess from 2006.”

“Regrettably this building needed to be brought down for the interest of the public’s safety,” Mayor Nelson said. “And I hope that, for those who are willing to have an open mind, I hope maybe this sways their opinion a little bit and puts faith back in the city and this council that we did our due diligence and we put the safety of the public at the forefront … this was the right decision.”

To help conclude the discussion about the demolition, Councilman Burris said he hopes some of the interest and enthusiasm previously expressed by the public in saving the Wesch-Oak can be put into helping save some of the other buildings still standing in town that do need help.

Mayor Nelson responded by saying that certified letters had been sent out by the city to the owners of the Bodega building, the Fowler building and the Petty building notifying them of the city’s expectations in keeping them in shape.

In other business during the June 21 meeting, the City of Hot Springs followed suit with the Fall River County Commission and the City of Edgemont in passing an temporary ordinance regarding the issuance of local medical cannabis establishment permits and/or licenses until the State of South Dakota issues their rules, no later than Oct. 29, 2021.