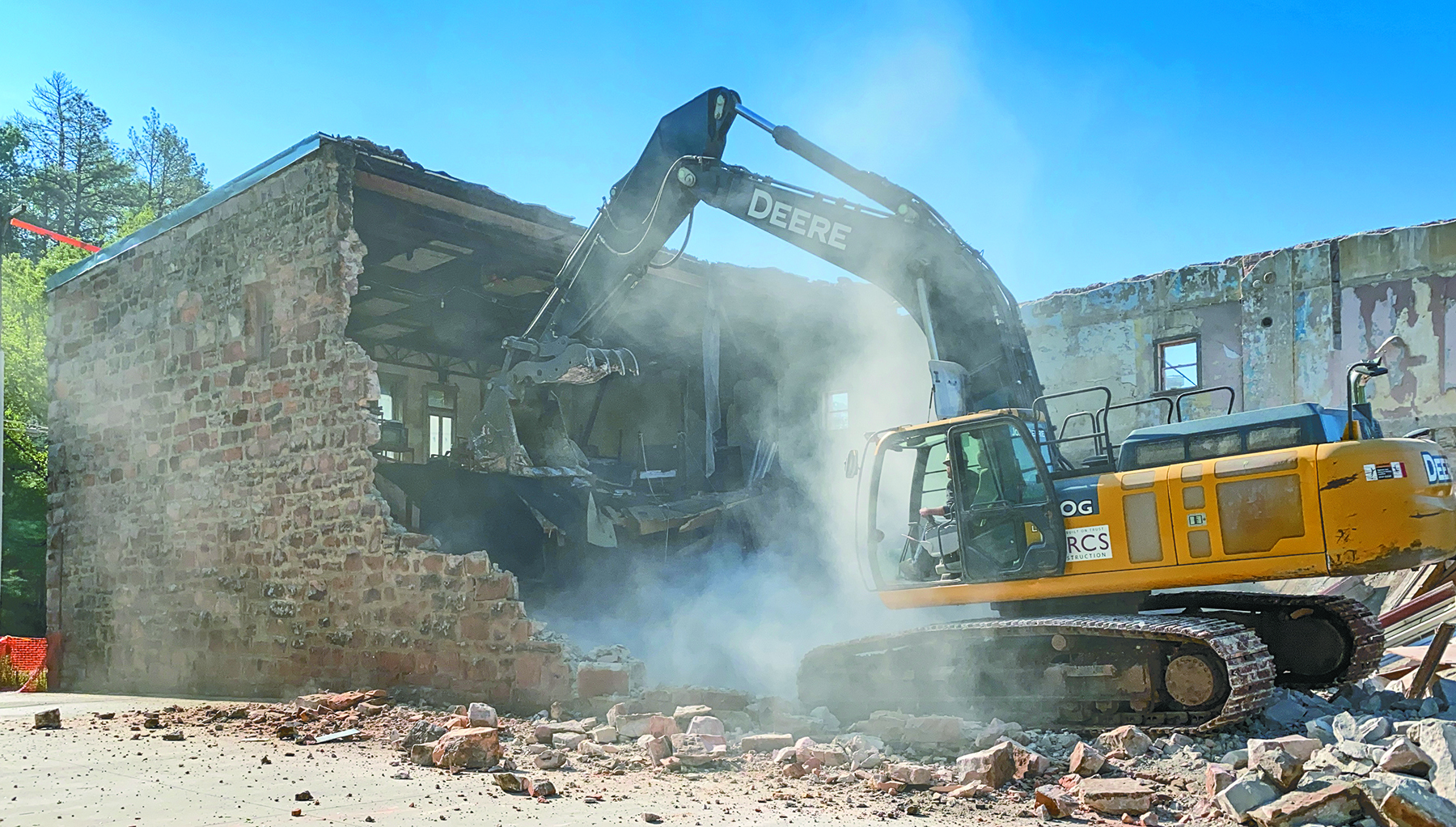 A demolition crew with RCS Construction of Rapid City works to take down the longtime condmened Wesch-Oak building on Wednesday, June 9, in downtown Hot Springs.

HOT SPRINGS – Demolition of the condemned Wesch-Oak building at 717 North River Street in downtown Hot Springs commenced early in the morning on Wednesday, June 9, and cleanup will be ongoing, according to Hot Springs City Administrator John Gregory.

RCS Construction crews were on-site and mobilized on Monday, June 7, and began taking the facade of the building down brick-by-brick with heavy equipment two days later. According to a spokesman on site, the plan for the roof to come down slowly with the surrounding walls was expedited as the roof caved in after only a few bricks were removed from the front wall.

After the roof came abruptly down, workers finished taking down the rest of the front, west-facing wall and then addressed the north wall and the rest of the interior before moving to the back, east-facing wall to finish up pushing all of the sandstone bricks inward. Later on in the day, the work moved to removing the upper south wall by hand as workers were using handtools to take out bricks on the portion of the wall which extended above the adjoining building. The majority of the common wall between the Wesch-Oak and the adjoining property owned by Steve Wynia will remain in place.

Work over the next couple of days after it began consisted of removing wood and other debris from interior of the demolition area, along with salvageable sandstone bricks which the city will stockpile for use in other city projects. City Administrator Gregory said 32 blocks of a particular size were earmarked for use as landscape boulders in the planned suspended sidewalk design, which will be part of the upcoming Hwy. 385 reconstruction project along North River, from Jennings to Minnekahta. He said those 32 blocks, along with around 100 others, were transported for storage at the city’s Material Recovery Facility (MRF).

On Monday, June 14, crews were filling in the hole with unsalvagebale brick and dirt and will eventually completely fill it in with it ultimately to take on the look of a gravel parking lot.

Gregory was unable to speculate on a completion date for the project but said a representative from RCS would provide a briefing at the next city council meeting on Monday, June 21. Mayor Nelson said RCS Construction will also be at the meeting to address the catastrophic failure of the building during the start of the demolition project.

In addition to the sandstone blocks that will be repurposed from the building, Gregory said some other items were removed prior to demolition – including the large red doors from the back of the building – and will be salvage auctioned by an antiques dealer through an architectural salvage website. He said he would share the link details with the public once they are provided to him.

Built in 1893, the Wesch-Oak was considered to be one of the oldest sandstone structures still standing in the community, but due to neglect from at least two previous owners, it fell into a state disrepair and has been vacant with boarded up windows for the past 20 to 30 years. Prior to that, the building served as a boarding house in Hot Springs’ early days, but in later years, transitioned into an auto repair shop.

The building was first condemned by the City of Hot Springs in 1994. A local grassroots organization known as S.O.S. (Save Our Sandstones) worked to raise funds and saved the building from demolition. The S.O.S. then sold the building in 2001 to Paul Amundson who set out to restore the building and began working on it himself.

Amundson eventually sold it to its current owner, which is the non-profit known as Hot Springs Citizens for Progress, which lists Robert Johnson of Arizona as its Principal Officer.

In January 2020, the building was condemned by the City of Hot Springs following an Inspection Warrant that was executed in part to ensure the building’s stability in relation to the pending Hwy. 385 road reconstruction, along with concerns by the adjoining landowner whose building is attached to the Wesch-Oak.

During that January 2020 inspection, which was the first inspection performed since 2013, it was determined by Albertson Engineering there had not been any improvements to the building’s condition and that it had deteriorated to a point that required “immediate evacuation of the structure by all inspection participants, due to imminent danger to life.” The area around the building was then barricaded off to prevent pedestrians from accessing the sidewalk in front of the building.

After soliciting bids and hearing ideas from investors, the Hot Springs City Council ultimately rejected a pair of proposals from a group known as WORK, LLC, and another from former Hot Springs resident Ron Eastep, which they felt could had once again delayed the start of the planned Hwy. 385 reconstruction through downtown and in front of the Wesch-Oak.

The council then decided to move forward with a demolition of the property. RCS Construction of Rapid City earned the lowest, reasonable bid for $183,000 for its complete demolition, including the salvaging of as many of the sandstone blocks as possible.