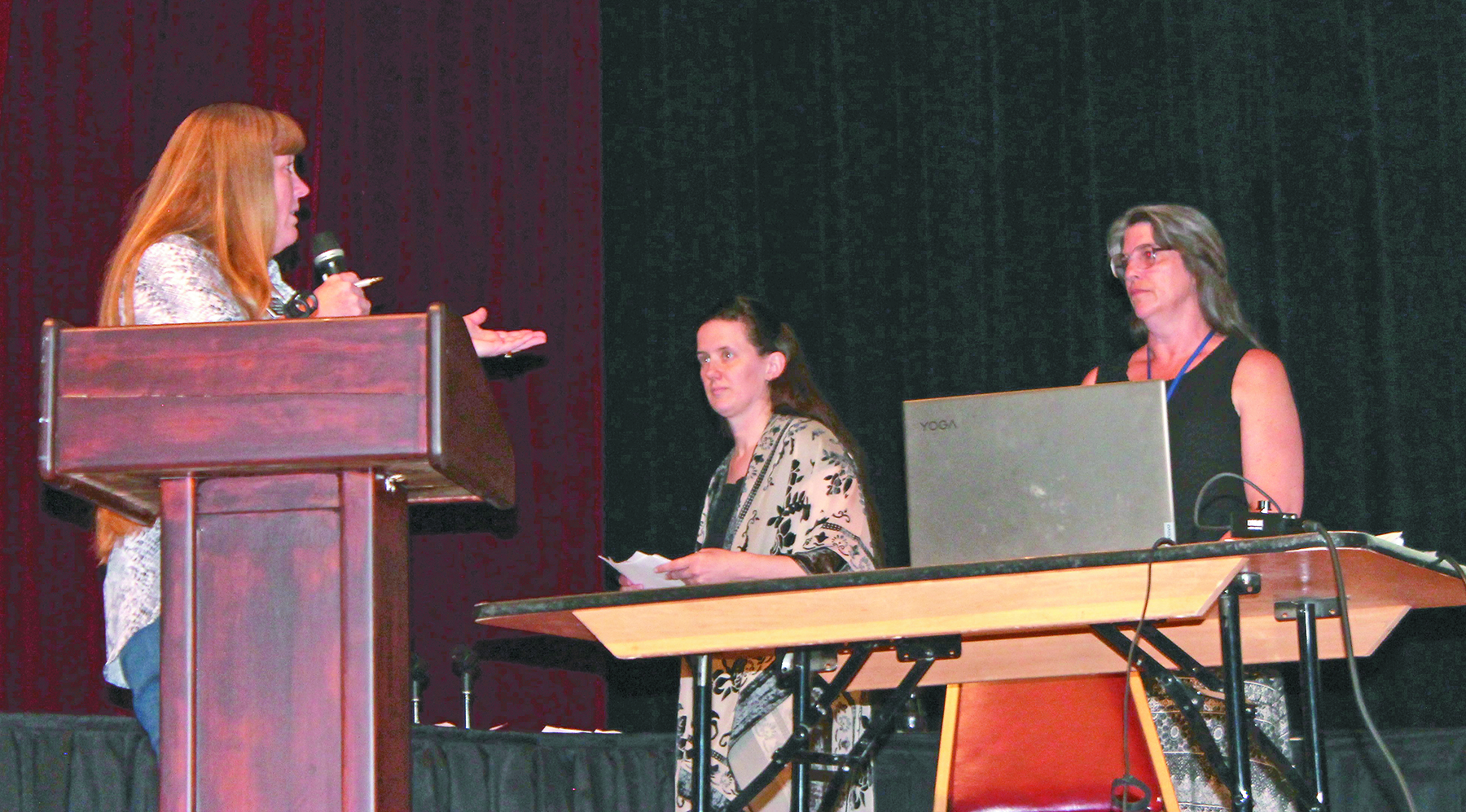 From left, State Senator Julie Frye-Mueller turns to Fall River County GIS Coordinator Stacey Martin and Director of Equalization Susie Hayes during the recent ag producers meeting held at the Mueller Center on June 9 and invites them to go to Pierre to testify for lower ag taxes and a correct soil table.

HOT SPRINGS – On Wednesday, June 9, Fall River County Director of Equalization Susie Hayes and her staff hosted an informational meeting at the Mueller Center on the topics of agricultural land assessment and taxes. Two guest speakers from the South Dakota Department of Revenue (DOR) appeared on screen via audio video equipment. They were Wendy Semmler, who is property tax director, and David Weiss, who is DOR secretary. Other guest speakers were State Senator Julie Frye-Mueller and Rep. Trish Ladner, who both appeared in person. Also present, were the county commissioners Joe Falkenburg, Deb Russell, Joe Allen, Les Cope and Heath Greenough, other county personnel and about 100 landowners.

“We want you to be informed,” she said. “We have a plan of action, and we’re going to create a solution.” She invited the crowd to write down questions on a sheet of paper that was handed to them as they came in the door. The questions were answered later in the meeting by Hayes and Martin.

“We will publish answers to your questions on the website if there is not enough time in the meeting,” Martin said.

Semmler and Weiss explained how cropland and noncropland are assessed. Weiss said the cropland data is obtained from South Dakota State University working with the USDA National Agricultural Statistics Service (NASS). There are ratings for each soil type. The soils that are most prevalent carry the highest rating. The NRCS is testing soils to get new classifications. Weiss said the new soil table is needed to come up with better data and more precision with soils in Fall River County. He encouraged anyone who had questions about the soils data should contact the NRCS office in Hot Springs.

Hayes said that the current assessment is based on a soil survey from the 1970s and ‘80s. The NRCS has been updating their data, which needs to be figured into a new soil table to create a better system, she explained.

“The project is pretty intense,” she said. “We’re not rolling out the soil table until we’re sure it’s right.” She said the new table will not be applied until 2023 – 2024. “It will be an uphill battle before this new table comes out,” Hayes said. “The county is not trying to get more tax dollars.”

She explained that to qualify for ag property taxes, a landowners’ principal use for their property must be for agriculture.

Hayes stressed the need to revive Senate Bill #4 from 2016. The bill says, in part, “any agricultural land that has been seeded to perennial vegetation for at least thirty years and is used for animal grazing or left unharvested, or is a native grassland, shall be categorized as noncropland for the purposes of determining the agricultural income value of the land.”

Hayes asked the landowners to fill out the forms that they were to receive at the end of the meeting. New ag laws were passed last year, Hayes said. Current legislative changes will take effect on July 1, 2021. The deadline for soil adjustment applications is August 31. The deadline for ag status applications is November 1. Hayes said the office is willing to help landowners with the forms.

“Please let us help you,” Hayes said, “but, don’t wait until the last minute. Please call and make appointments.”

Sen. Julie Frye-Mueller, who serves on the state’s ag committee, asked the landowners to come to Pierre and testify. “We have to be organized,” she said.

Rep. Trish Ladner, also an ag committee member, said, “We have to be a team and stand together.”