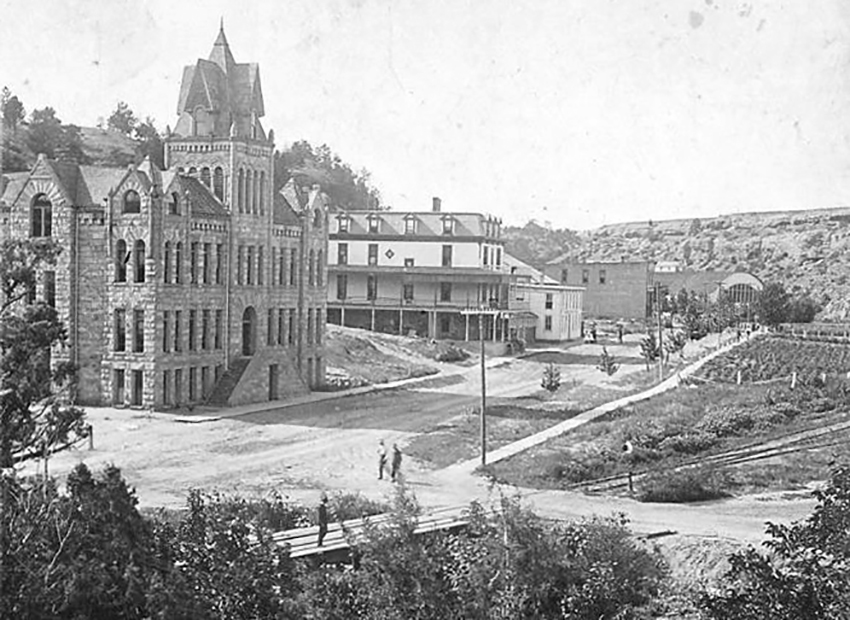 On November 2, 1883, Fall River County was a recognized county in the Dakota Territory and by November 17, 1883, the county was fully organized with Hot Springs as the County Seat. Eight years later, in 1891, a four-story sandstone courthouse, pictured above on the left, was erected at 906 North River Street and is still in use today.

Cattle rustling, vote tampering, and a new Sheriff in town

HOT SPRINGS – In the early 1880s, there was unrest amongst the Dakota Territory residents in the southern region of Custer County, which was formed in 1875 and organized two years later in the county seat of Custer City.

According to reports at the time in the Black Hills Weekly Times – a regional newspaper published in Deadwood – many of those southern residents felt they were being taxed heavily in order to fund the growth of the northern part of the county. Additionally, the same news source reported many cattle ranchers in the southern area of the county were faced with lawlessness and were tiring of the seemingly rampant cattle rustling on their southern ranches. With the county seat of Custer City so far away, they felt a new county seat at Hot Springs with law enforcement in closer proximity would definitely help with their predicament.

One outspoken resident, James A. Shepard, who would eventually become the first Sheriff of Fall River County, was in favor of the divide. Sheps Canyon, located south of Hot Springs and which now leads to the southwestern entrance of Angostura Reservoir, was named after him.

According to an excerpt from an untitled book found in the Helen Magee Heritage Room at the Hot Springs Public Library, Shepard had come to the Dakotas soon after the opening of the Sidney Trail in 1877. He was an avid proponent of dividing Custer County, much to the chagrin of many of his friends who had reportedly threatened violence against him. Yet he was quoted in the aforementioned book excerpt as saying “I hate to lose my friends, but if there is going to be any shooting, I will be the one who will do it.”

That same book excerpt also stated that the slogan for the divide of Fall River County from Custer County soon became ‘United we fall, divided we stand’.

The legislative assembly of the territory of Dakota defined the borders of Fall River county to be, “Commencing where the township line between townships number six and seven south of the Black Hills meridian intersects the division line between the territories of Dakota and Wyoming, running thence east along the said township line to a point where said line intersects with the one hundred and third parallel of longitude west from Greenwich, thence south on said parallel of longitude to the southern boundary line of the territory of Dakota. Thence west along said line to the eastern boundary line of the territory of Wyoming. Thence north to the place of beginning.”

On April 3, 1883, an election for the division of Custer County to create a new county to be named Fall River County was held. According to the legislative assembly, those who could vote were legal voters currently residing within the territory of the proposed new boundaries. On April 7, 1883, the Black Hills Weekly Times stated the results of the election as the Fall River Precinct voting 61 for, 2 against, and the Cheyenne River Precinct voting 4 for, and 50 against, for a total of 65 for the divided county and 52 against.

This led to a headline on April 7, 1883, in the Black Hills Weekly Times to read, “The Election in Fall River County – The Result Doubtful”; running a further story telling of jubilation and parties in the streets due to the election outcome.

A letter to the Custer City Board signed by A. S. Stewart and E. Petty asked that an abstract of votes cast within the proposed county be made available. The request was denied.

The validity of the election, now in question, resulted in the parties interested in creating Fall River County to take the commissioners to court requesting a restraining order against them. The case was heard by Judge Church on May 1, 1883. The restraining order was granted, and the commissioners were compelled to report the election as ‘for division’.

It was reported in The Daily Deadwood Pioneer-Times on November 21, 1883, that the Dakota Territory Governor Nehemiah Ordway had appointed Edmond Petty, Elisha P. Chilson and William P. Phillips as commissioners. It was further reported that, despite Governor Ordway’s support of the new county, some Custer County officials did not want to let the lower portion of their county leave without a fight, as Custer County Judge Moody had informed his clients to pay no attention to the new organization of Fall River County.

That same week, a different newspaper published out of Rapid City known as the Black Hills Weekly Journal, a.k.a. The Journal, stated that the Gubernatorial appointment rumors were without merit. But by late November 1883, after the dust of the controversy had settled, the Black Hills Weekly Journal issued an apology of sorts regarding their coverage of the division.

“So far as The Journal is concerned in this connection, we are free to state that we did not believe in the manner of making a new county. We thought and still think the same thing of the movement to divide the territory on the forty sixth parallel. Anything we may have published adverse to the creation of Fall River County sprung from our belief. However, if Fall River County has a legal existence, none can be more ready to wish it, its organizers and good people general abundant prosperity”.

On November 2, 1883, Fall River County was a recognized county in the Dakota Territory and by November 17, 1883, the county was fully organized with Hot Springs as the County Seat. Eight years later, in 1891, a four-story sandstone courthouse was erected at 906 North River Street and is still in use today.

Also taking place around this same time was the admittance of the states of North and South Dakota into the union on November 2, 1889, thus splitting the territory of Dakota along the 46th parallel.

Also of note, prior to Fall River County’s struggles in becoming a county of its own, there was a small, short-lived area of southwestern South Dakota known as Forsyth County, which can be seen on early 1880s Dakota Territory maps.

In April 1880, a post office was established in Forsyth County with George H. Holden as postmaster. Yet the post office was discontinued November 1881. In February 1881, a bill was forwarded to Yankton to annex the unorganized County of Forsyth and combine it with Custer County. By March of 1881, Forsyth was no more but that area now represents the lower portion of Fall River County.

A special thank you to the South Dakota State Historical Society for their invaluable assistance with research for this piece.