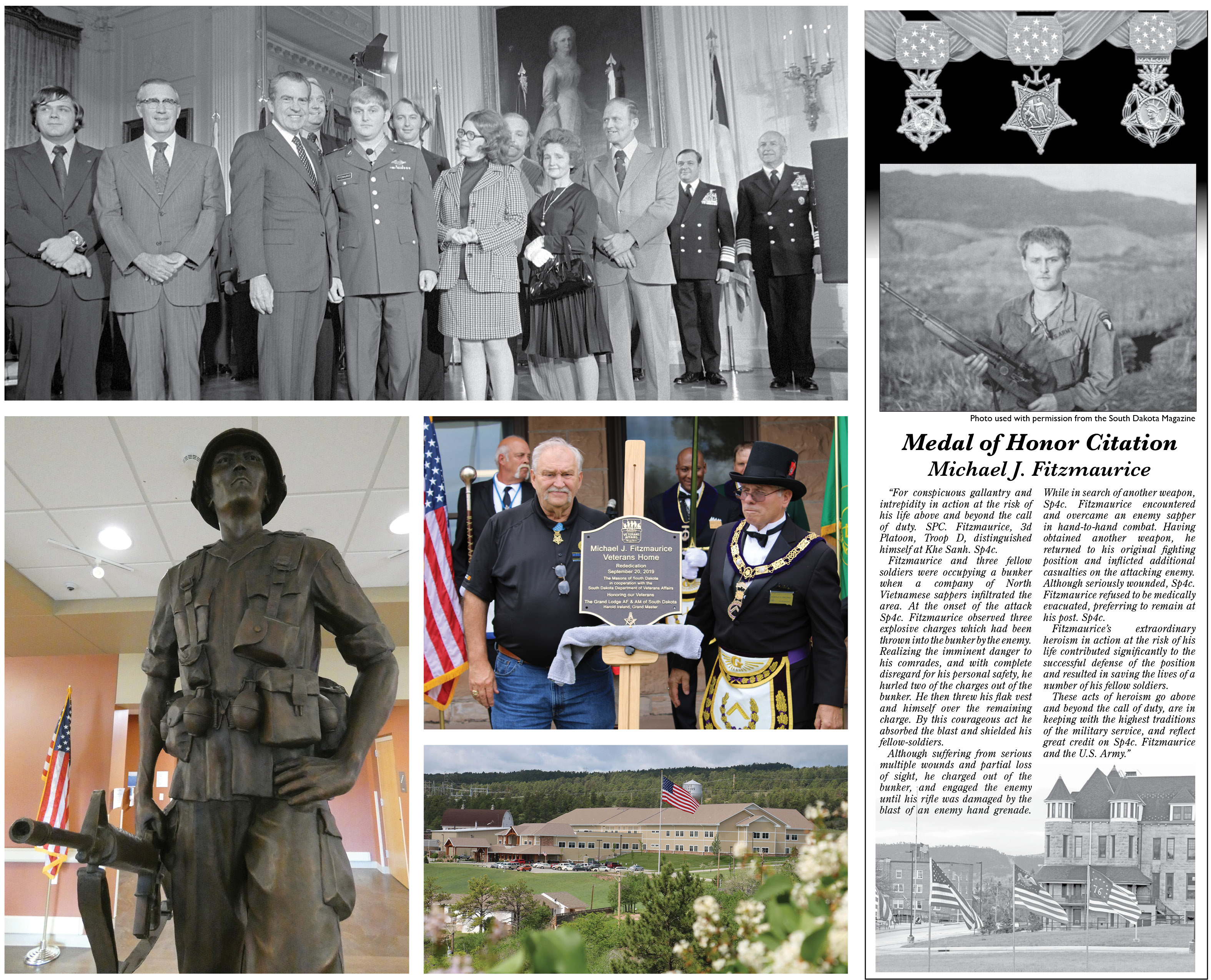 Michael J. Fitzmaurice, center, was awarded the Medal of Honor by President Richard Nixon in a ceremony at the White House on Oct. 15, 1973.

Publisher’s Note: This story about Michael J. Fitzmaurice is the next in an ongoing series of stories by the Fall River County Herald-Star to highlight the history of the people behind the names of many of our county’s buildings, landmarks and attractions.

HOT SPRINGS --- During the early morning hours of March 23, 1971, Spc. 4th Class Michael John Fitzmaurice (pronounced fitz-morris) was just finishing guard duty on a hill near the Khe Sanh airstrip in South Vietnam when enemy troops moved into the area.

Around 2 a.m., mortar shells began to land around Fitzmaurice and his company’s bunker.

Looking out from the bunker, Fitzmaurice saw that several enemy sappers (well-trained, combat engineer commando units) had infiltrated the perimeter.

Three explosive charges were thrown at Fitzmaurice’s position, and he was able to throw two of them back at the enemy.

Realizing a third charge was about to explode, the 21-year-old Fitzmaurice “threw his flak vest and himself over the remaining charge” and “absorbed the blast and shielded his fellow soldiers.”

Even though he was seriously wounded from the explosion, Fitzmaurice continued to fight and refused medical evacuation.

For his courageous acts, Fitzmaurice was awarded the Medal of Honor by President Richard Nixon at the White House on Oct. 15, 1973.

Then-South Dakota governor Bill Janklow said, “We are very proud of Mike Fitzmaurice. He is a true South Dakota hero. Naming the Veterans Home in his honor is a tribute to him and his family which will last forever.”

The history of the Veterans Home dates all the way back to the 1880s.

After the American Civil War, the Grand Army of the Republic (GAR), a fraternal organization of Union veterans, “was active in establishing Soldiers’ Homes in several states.”

In 1886, The Dakota chapter of the GAR began to lobby the Territorial Legislature for the building of a Soldiers’ Home. Potential sites for the home included Pierre, Watertown, Jamestown, and Hot Springs.

After a series of setbacks, the continued efforts of the GAR and other prominent figures in the Territory led to the eventual passage of a bill funding a Soldiers’ Home in 1889.

Hot Springs was chosen because of the medicinal properties of the warm mineral springs and a “healthful climate.”

The laying of the cornerstone occurred in November of 1889, “with the Masonic ritual conducted in the midst of a blinding snowstorm.”

Despite the poor weather conditions, about 200 people and 82 teams of horses took part in a celebratory parade that ran from downtown up to the Soldiers’ Home.

His parents, who were both South Dakota residents at the time, were traveling through North Dakota when Michael suddenly came along prematurely. After a couple of weeks in the hospital, the Fitzmaurice family returned to their home in eastern South Dakota.

After graduating from Iroquois High School in 1969, Fitzmaurice and several of his classmates enlisted in the military and left for boot camp in October. By the following May, he was in South Vietnam.

Fitzmaurice remembers mortar fire and ground assaults almost every night, but on the night of March 23, 1971, “a company-sized force broke through the perimeter to where the helicopters were parked.”

After being seriously wounded by covering an explosion with his flak jacket, Fitzmaurice continued fighting. The blast left Fitzmaurice partially blinded but he “charged out of the bunker” and “as he was fighting, his weapon was destroyed by another grenade. Unable to find another weapon, [Fitzmaurice] resorted to hand-to-hand combat and successfully took down a number of adversaries.”

Fitzmaurice spent the next 14 months of his life in and out of hospitals. He suffered from shrapnel wounds, blown eardrums, and a dislocated eye.

After the war, Fitzmaurice continued to serve his country in the South Dakota National Guard and also worked at the VA Medical Center in Sioux Falls until his retirement in 2011.

In 2013, construction began on a new, more modern Veterans Home and residents moved into the new facility in 2016.

Then-governor Dennis Daugaard said, “This first-class facility is exactly what our veterans deserve [...] South Dakota’s veterans not only have a nice place to live, but a home where they can enjoy the rest of their life.”

Also in 2016, a 350-pound life-size bronze statue of Fitzmaurice entitled “Evening Before Khe Sanh” was placed in the main entrance lobby of the Veterans Home. Sculptor Darwin Wolf said that it was his “interpretation of how Fitzmaurice appeared the evening before he earned the Medal of Honor.”

Today, Fitzmaurice lives with his wife in a small town just west of Sioux Falls.

In a phone interview, Fitzmaurice humbly answered the questions of this inquiring reporter.

Reporters have asked you so many questions over the years. Is there anything you would like to say?

“I did not figure on surviving the war in Vietnam. It was just the luck of the draw. All I was trying to do was save my buddies,” Fitzmaurice responded.

Is there anything you would like to say about or to the community of Hot Springs?

What would you say to our present-day generation where it seems like people are increasingly looking out only for themselves?

A very special thank you to Michael J. Fitzmaurice for his willingness to speak with me and answer my questions. Thank you, Mike, for your service.

Additionally, thank you to Brad Richardson, Superintendent of the State Veterans Home, Ryan Pettigrew, Archivist at the Richard Nixon Presidential Library and Museum, and John Andrews, Managing Editor of the South Dakota Magazine for their contributions to this story. Information for this article obtained from the book “Images of America: Fall River County and Hot Springs, 125 Years” by Peggy Sanders, newspaper and magazine archives, and the Helen Magee Collection.