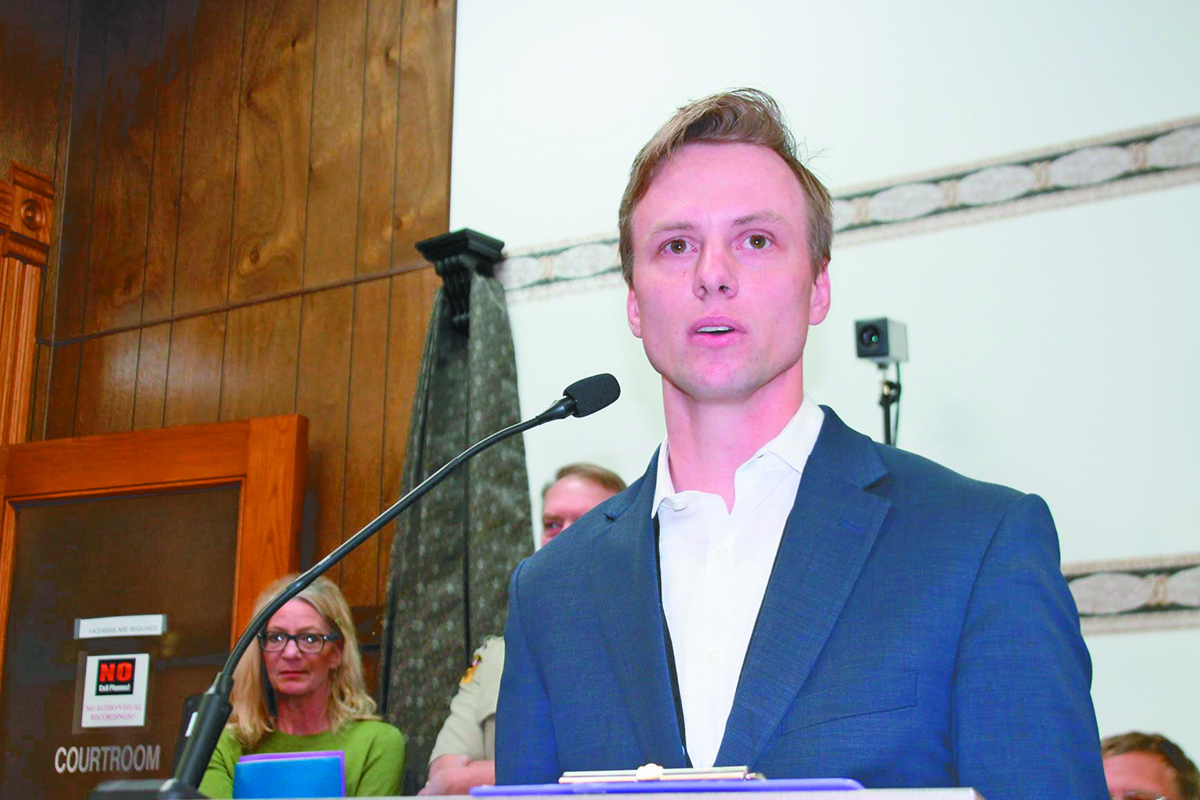 Cole Romey tells the county commission that he is ready to come back to Fall River County to open his attorney’s office as a participant in the Rural Attorney Recruitment Program.

HOT SPRINGS – On Thursday, May 20 the county commission voted to accept Cole Romey, an Oelrichs native, into the Rural Attorney Recruitment program for Fall River County. Appearing with Romey at the commission meeting was Suzanne Starr, who is the director of policy and legal services with the Unified Judicial System of Pierre.

During the May 6 commission meeting, she had presented information on the Rural Attorney Recruitment Program. She explained that the recruitment program was started in 2013 to provide attorneys to the rural areas that have populations of less than 10,000 and have a shortage of attorneys. The attorneys are guaranteed $12,500 a year over five years. The county is responsible to pay 35 percent a year of the $12,500 for five years. The attorneys must have their primary practice in that county, although they can have business from surrounding areas. The attorneys will receive their first payment of $12,500 after they complete the first year. Currently, Romey is a clerk with S.D. Supreme Court Justice Kern. His family’s ranch is in the Oelrichs area.

Auditor Sue Ganje told the commissioners that due to a recent change in the law, the county now has four off-sale liquor licenses available to issue to businesses outside the municipality.  The number of licenses is determined by population, Ganje said. Currently, there are four businesses that have on-sale licenses and one with a restaurant license, all of which would qualify to apply for the off-sale licenses. However, before issuing the licenses, the commissioners must set the criteria, which includes the fee amount and how to issue the licenses. The commission voted to table the decision until their next meeting that is June 3 because Ganje said that she and State’s Attorney Lance Russell want to gather further information on issuing the licenses.

Director of Equalization Susie Hayes announced that a meeting to discuss crop soils will be held at the Mueller Center on Wed., June 9 from 4 p.m. to 6 p.m. “We need ag applications from each producer,” Hayes said. “There will be forms available at the meeting.” She said forms will also be mailed to producers who cannot attend the meeting.

Hayes reported that the veteran property tax exemptions grew from 54 last year to 85 this year.

Treasurer Teresa Pullen reported that the county has 13 properties ready to sell. Two are in Ardmore, one in Dudley, six in Edgemont, and four in Hot Springs.

State’s Attorney Lance Russell told commissioners that legislation and policy related to marijuana should be long-term and permanent. He advised the commission not to implement anything on a temporary basis. He said the commission has to license at least one entity to sell marijuana in the county. He explained that the commissioners can issue as many licenses as they want to. “Each municipality can decide to issue licenses, so we will have four at a minimum in Fall River County,” he said.