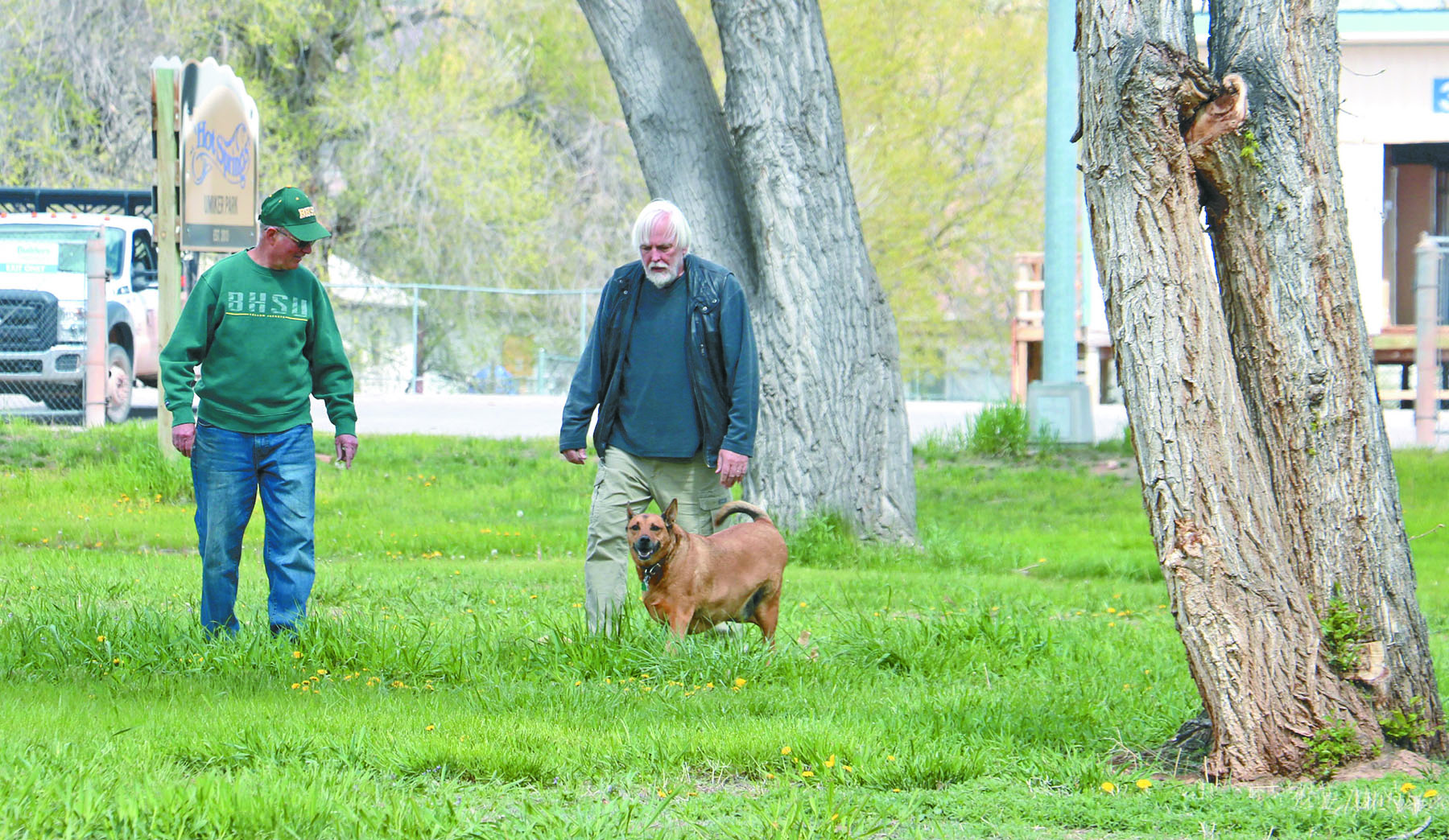 Gerald Collogan, left, along with Adam Heath and his dog Django, take a walk in Umiker Park, which is the site of a planned Dog Park being funded completely by donations.

HOT SPRINGS – Umiker Park in Hot Springs is going to the dogs – but in a very good way.

While living at their home in Alabama, Adam and Linda Heath of Hot Springs would often take their dogs to the nearby dog park. It is there where Adam said he got to know people from all walks of life; people whom he would have otherwise had very little in common, but there, the people always had at least two things in common – they had a dog and they loved dogs.

But the social benefits of an dog park to the dog owners was merely a by-product of the true purpose of the park, Adam said. Other advantages of taking his dogs to the park was that it provided a safe place for his dog to run “off-leash” with concern of being hit by a car or other hazard, it was great exercise to keep his dog healthy and was a way for his dog to socialize with other dogs.

When living back in his home town of Hot Springs, Adam wanted to see someplace with that same kind of canine-driven sense of community and camaraderie, so he and his wife began searching out a location.

His first attempt at securing some county-owned land near the turn-off to Cottonwood Dam was unsuccessful, but over time, an opportunity arose inside the city limits of Hot Springs after City Councilman Dave Burris began a push to convert most of Umiker Park into a community Dog Park a little over a year ago.

Donated to the City of Hot Springs in 2013 by Eldon Umiker, the park is located between the Hwy. 18 bypass and Joplin Avenue and opposite the EconoLodge Motel. It includes land on both sides of Fall River and currently just has picnic tables and trash cans.

Once Heath and Burris began working together, along with longtime parks supporter Gerald Collogan, the ball really got rolling, and resulted in the city giving its blessing and Adam and Linda Heath putting down $5,000 of seed money to kick-off the project.

While the City of Hot Springs has agreed to continue trash service and install a water line, the rest of the project will be completely donation-driven, with a current goal of at least $20,000 to get the initial stages of the park kicked off, which includes installing a 5-foot tall, coated chain link fence perimeter.

Despite Umiker Park being located on both sides of Fall River, only the portion east of the river will be enclosed and covered with sand and become the Dog Park. Heath said that the Dog Park he and his dog utilized in Alabama started as grass, but over time, wear and tear ended up taking it down to dirt. So the plan from the get-go with this park is to cover it in sand, which will also drastically reduce the amount of maintenance needed.

Future plans for the area include adding some “doggy-style” playground equipment, obedience training classes and possibly even a wood sculpture that utilizes an existing dead tree.

But before any of it can happen, more funds are needed.

Both a bank account at Black Hills Federal Credit Union and a GoFundMe page for “Friends of Umiker Dog Park” has been established to raise the necessary money.

In addition to funds, the volunteer group will also be in need of volunteer labor, when the time comes to install fence and place the sand inside the enclosure.