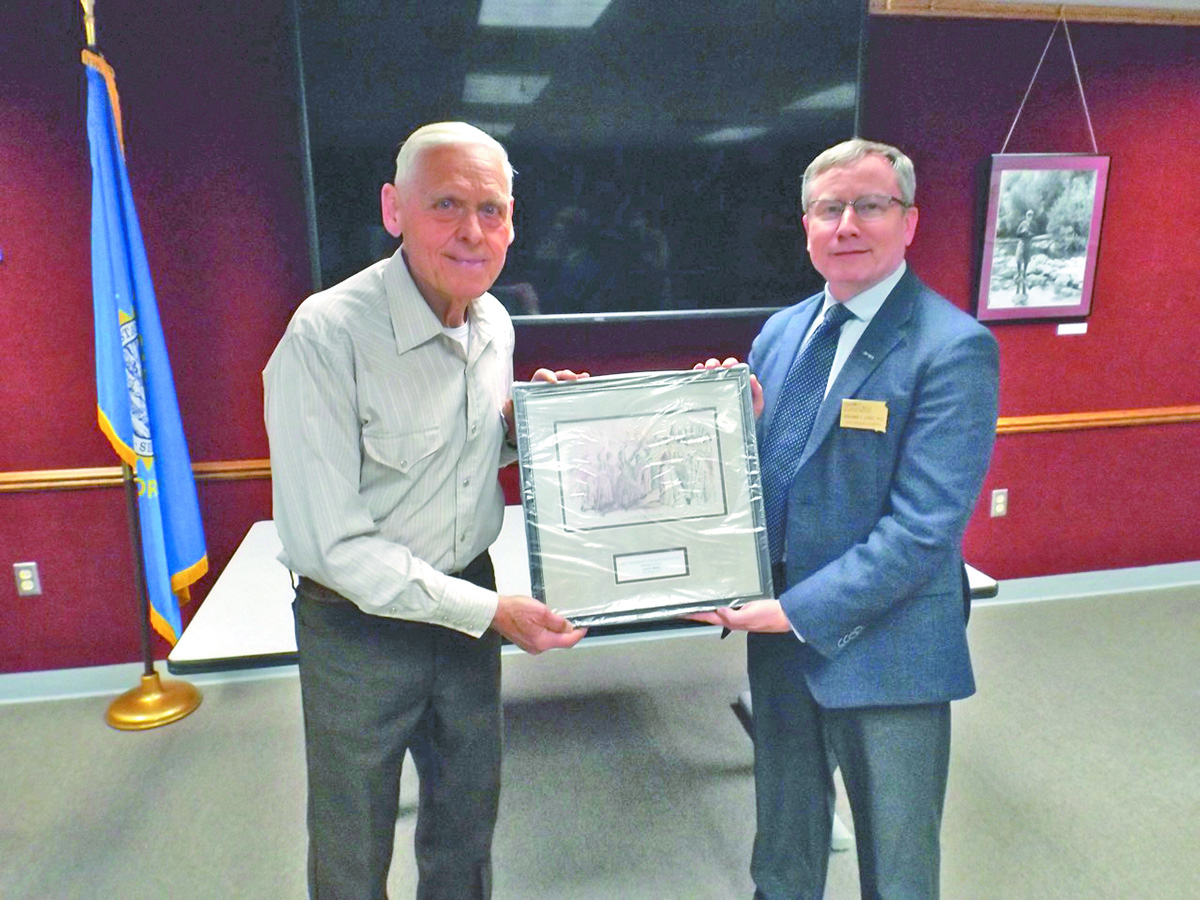 PIERRE – Larry Belitz of Hot Springs was recently honored by the State Historical Society when he was presented the Governor’s Award for History through a virtual conference in Pierre on April 24. Others recognized included John Mollison of Sioux Falls and Wayne Fanebust of Sioux Falls, also both in the individual category; Scott Tubbs of Rapid City as History Teacher of the Year; and Philip Burnham of Albuquerque, New Mexico, with the Herbert S. Schell Award.

Belitz is an historical artist, author, consultant, speaker, teacher, advisor and curator focused on the American Indian lifestyle and history. He was presented the award at the statewide conference for demonstrating outstanding dedication and commitment to excellence in “Promotion, Collection, Preservation and Interpretation” of South Dakota history.

Born of German descent in 1943 and raised on a farm in eastern Iowa, Belitz attended Concordia University in River Forest, Ill., with degrees in Education and Theology. He moved to South Dakota in 1970 where he taught Indian history and culture at Oglala Community School on the Pine Ridge Sioux Reservation and became the adopted blood brother of Flossie Bear Robe who taught him porcupine quillwork.

Belitz has since served as “Indian Technical and Historical Advisor” for 10 major films, including: Alamo, Dances With Wolves, Indian in the Cupboard, Return to Lonesome Dove, Maverick, Wyatt Earp, Last of the Dog Men, both Crazy Horse films, Hidalgo and Lewis and Clark: Great Journey West.

He has also been advisor to major museums, is known worldwide for constructing items precisely as crafted during the early 1800s and is the fist in nearly a century to construct an authentic Sioux buffalo hide tipi utilizing brain-tanned hides, sinew-sewing and historic construction.

In regards to his latest award, Belitz was noted for his “Promotion” through teaching SD History and Culture for 18 years in the Hot Springs rural and middle school and during the summer at the University of South Dakota to Lakota educators. After studying the handful of original buffalo hide tipis, Larry restored the art of tanning and sinew-sewing hide tipis in his Sioux Replications business, with 65 he has constructed. Due to this, he was commissioned to instruct Arapahoe, Northern Cheyenne and Kiowa tribes so each could construct their own buffalo hide tipi, after an absence of over 130 years.

Belitz worked at “Collection” in the 1970s when he taught Indian History and Culture, plus traditional subjects, on the Pine Ridge Reservation and served as curator of the Wounded Knee Museum. Today he has at his ranch the Lakota Cultural Museum where each artifact from the Buffalo Days is documented on his www.siouxreplications.com website.

The “Preservation” recognition was derived from his books BRAIN TANNING the SIOUX WAY (in its 24th printing), THE BUFFALO HIDE TIPI of the SIOUX and award-winning, bilingual DVD titled LAKOTA QUILLWORK, ART and LEGEND. The word “brain-tanning” was first coined in his aforementioned book.

Through his “Interpretation” of history for 50 years with museums and collectors, Larry was honored by the title “Plains Indian Material Culture Consultant/Expert”.

Until the virus became an issue, Larry and wife Doris volunteered as missionaries to the Pine Ridge Sioux reservation where Doris brought meals for each worship service and Larry assisted using magic to present Gospel truths.

Belitz was nominated for the South Dakota Governor’s Award for History by Dr. Kenneth Palmreuter, who is the current Principal of Bethesda Lutheran Church in Hot Springs and a recent award winner himself. Dr. Palmreuter was selected as the 2021 Lutheran Education Association’s Distinguished Retired Lutheran Educator EncourAGING Award after a 56-year career in Lutheran Education.