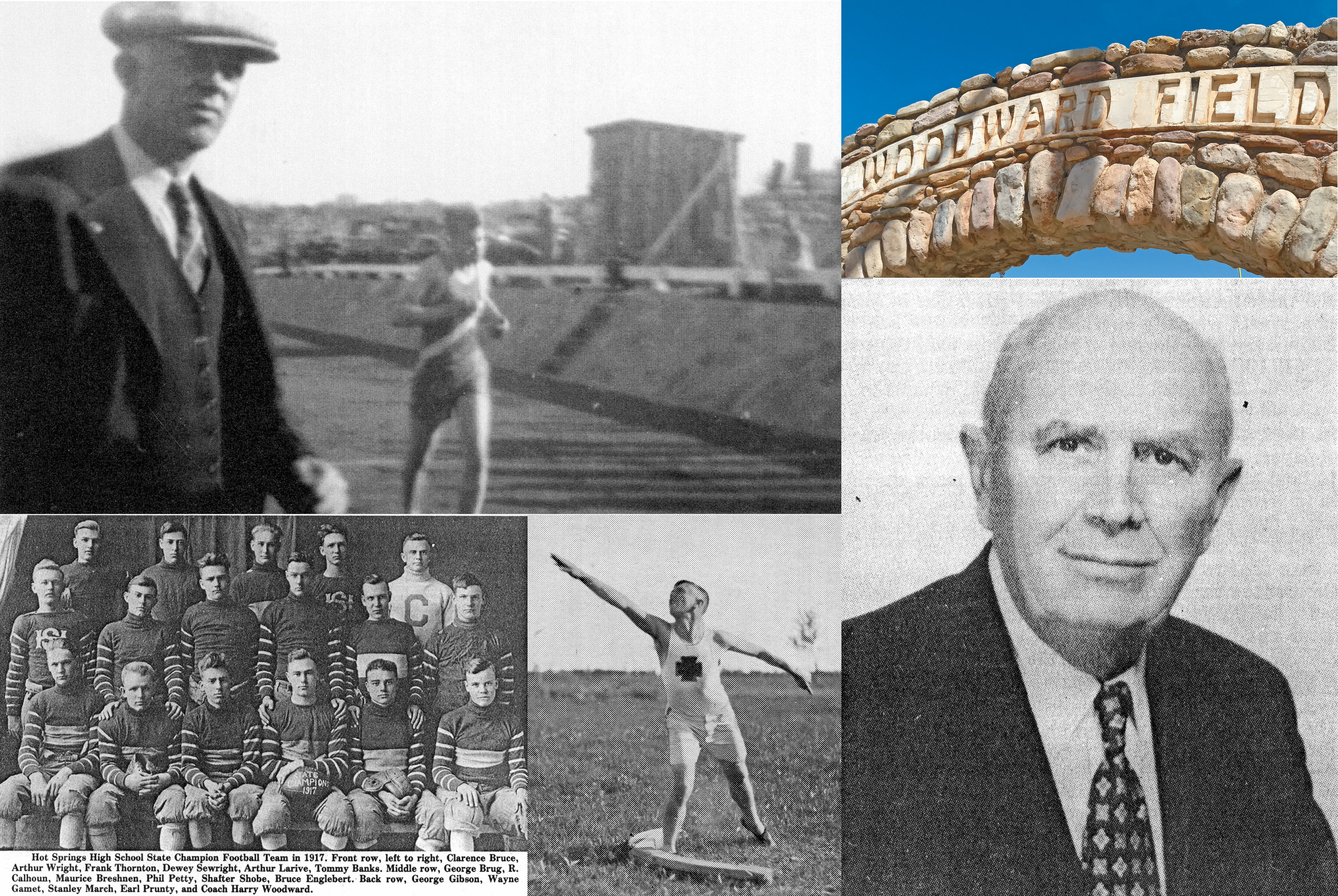 In appreciation of his efforts to promote physical activity of the boys and girls of Hot Springs, the athletic field at the high school was dedicated as Woodward Field in honor of Harry Reuben Woodward, who was a coach, teacher and administrator in Hot Springs from 1916 to 1955. The arch (pictured top right) leads to the football field, which was constructed by Civil Works Administration (CWA) beginning in 1933 and completed in 1935 by the WPA. (Top right photo from Peggy Sanders/Images of America: Fall River County and Hot Springs, 125 Years)

BOTTOM CENTER: As a college athlete at Dakota Wesleyan in Mitchell, Harry Woodward was the Captain of the track and field team. It was stated at that time that “ ‘Woody’ is without a doubt the best all around track man that Wesleyan has had for years. He excels in the weights, the pole vault, and in the distance events. One of his great assets is his endurance. He graduates in 1916 and Wesleyan loses thereby a most powerful supporter of her track records.” (Photo from Dakota Wesleyan Archives)

Publisher’s Note: This story about H.R. Woodward is the next in an ongoing series of stories by the Fall River County Herald-Star to highlight the history of the people behind the names of many of our county’s buildings, landmarks and attractions.

Originally from Hurley, S.D., Woodward graduated high school in 1911, then earned his bachelor’s degree from Dakota Wesleyan University, and eventually received his master’s degree from Stanford University in 1929.

His excellent coaching abilities led the Hot Springs football team to three conference championships in 1916, 1917, and 1918. Also in 1917, the team went on to win the state championship, losing only one game that year.

The year 1918 was an interesting one for Woodward and sports around the country in general.

The season “was cut short by the influenza epidemic that was sweeping the country, but Hot Springs still retained the championship of the Black Hills because they were the only school that played a high school game and won, defeating Edgemont 32-0.”

When the football team was short on players, Coach Woodward sometimes filled in and played in the games himself.

In 1918, Woodward married Mary Catherine Cleaver of Hot Springs and they had two sons: Harry, Jr. and Quentin.

In 1919, Woodward became the high school principal and in 1922 was promoted to Superintendent of Schools.

During the Great Depression, Woodward “tore up his own contract with the school and took a pay cut [...] so that the teachers’ pay would not be cut.” He also planted many evergreen trees on the school grounds at his own expense.

Also during the Depression years, Woodward recommended a “very ambitious project for a complete athletic field through the CWA (Civil Works Administration) and later through the WPA (Works Progress Administration), the culmination of which resulted in one of the finest hand sodded football fields and regulation cinder tracks in the state.”

The field was completed in 1935 and was dedicated as Woodward Field in 1940 “as a tribute to their well-loved administrator.” A couple of years later, the field “became one of the first lighted football fields in the Black Hills.”

During his time in Hot Springs, Woodward was an active Mason, Shriner, and Kiwanian, served as the vice president of the Chamber of Commerce, was a member of the United Churches and sang in its choir, was chairman of the local Boy Scout troop, and was the treasurer of the Fall River County Red Cross chapter.

Woodward also loved the outdoors and was a seasonal park ranger in Yellowstone National Park.

In the late 1930s, Woodward “was the first person to figure out a mathematical relation between the duration and intervals of eruptions of the Old Faithful Geyser in order to predict the timing of the next eruption.”

Woodward loved to write about nature. Stored in the Helen Magee Heritage Room at the Hot Springs Public Library are many articles Woodward wrote for various publications. He wrote about wildflowers of the Black Hills, grizzly bears, coyotes, spiders, and anything to do with Yellowstone National Park.

Speaking about her grandfather, Robin Woodward Robinson, who currently resides in Jacksonville, Fla., said, “Woody, as he was commonly known, was well liked and respected by everyone. He had an especially close bond with his students and took their best interests to heart. He tried to lead them down the best possible path for their future.”

On March 8, 1954, Woodward renewed his Superintendent’s contract for another four years. Unfortunately, he unexpectedly passed away on Nov. 14, 1955.

Woodward was inducted into the Hot Springs Bison Athletics Hall of Fame in 2018.

Quinten D. Hofer, who grew up in Hot Springs but currently lives in Cedar Rapids, Iowa, was asked by the Woodward family to present for their grandfather at the Hall of Fame induction ceremony.

“What an honor to speak about the biggest icon in Hot Springs High School History,” Hofer said about the event.

Hofer continued, “Growing up in Hot Springs I knew very little about Harry Woodward. As a young boy I would ride my bike to the Jack & Jill grocery store to buy snacks. I would sit underneath the arch at the south end of the football field in the shade. I would look up and see the name Woodward on the stone arch and wonder ‘Who is that?’”

“When preparing to present for Woodward at the Hall of Fame banquet my research told me much more and what he meant to the Hot Springs School system and Hot Springs High athletics. My biggest takeaway was that he was a visionary. His forward thinking put Hot Springs High in a position to excel academically and athletically. I am proud to be a graduate of Hot Springs High class of 1978 and to have benefitted from Harry Woodward’s work.”

Thank you to Laurie Langland, University Archivist at Dakota Wesleyan University, Linda Veress, Public Information Specialist at Yellowstone National Park, Robin Woodward Robinson, and Quinten D. Hofer for their contribution to this story. Information and photos for this article obtained from the book “Images of America: Fall River County and Hot Springs, 125 Years” by Peggy Sanders, newspaper archives, and the Helen Magee Collection.