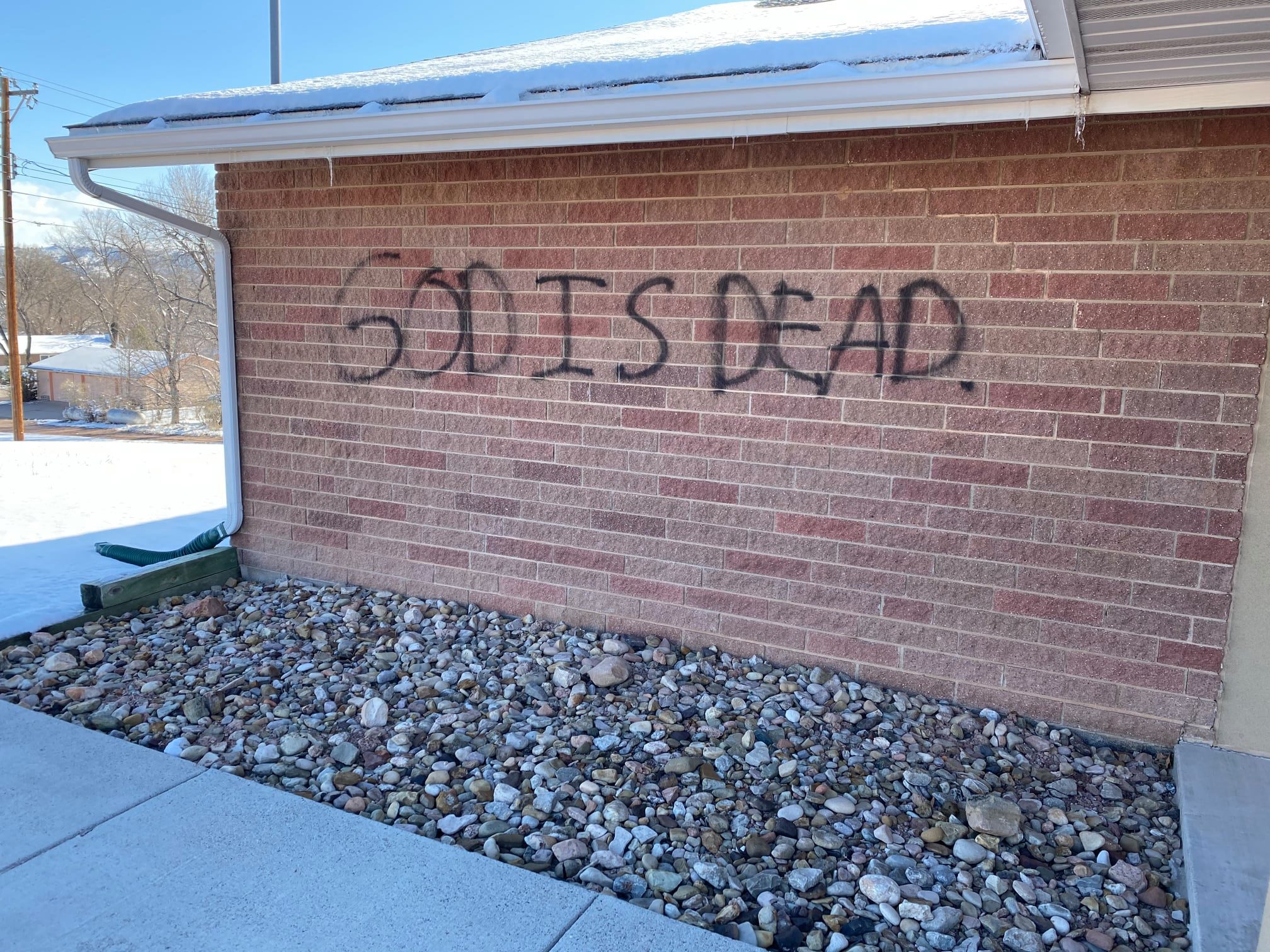 Black spray paint was used to vandalize both the Wesleyan Church (pictured here) in Hot Springs, as well as the nearby Cavalry Baptist Church.

HOT SPRINGS – A pair of teenage juveniles – one male and one female – have been identified as the suspects behind around 10 incidences of vandalism that were reported in Hot Springs on Tuesday, April 20, which occurred sometime the night before. All took place inside the city limits on what is known by many as College Hill, with the most extreme of which being the words “GOD IS DEAD.” spray-painted on both the Hot Springs Wesleyan Church and the Cavalry Baptist Church, located along Canton Avenue.

Hot Springs Chief of Police Mike Close said the first report came in around 6:30 a.m., followed by many more later in the morning, which ranged from damage to vehicles and windows, as well as spray paint on a semi-truck parked at Family Dollar, and the aforementioned damage to both of the churches. Close said a cap from a can of spray paint was also recovered from the Family Dollar parking lot.

Close said the suspects were identified two days later after they had bragged about their exploits to friends and also on social media. The two individuals are not in custody, but according to Close, in cases involving juveniles like this which are not “violent,” a report is made and then turned over the States Attorney who will decide how to proceed.

Since the damages to personal property do total more than $1,000, the charges against the juveniles will be considered felonies.

As a way to find out if there was any other unreported incidents of vandalism that night, Close said the Police Department made a post on Facebook requesting residents to call and report it, but as of Monday, April 26, no additional victims have come forward.

Following the spray painting incident, Wesleyan Church Pastor Keegan Kingery addressed the act on the church’s public Facebook page and described the wide range of emotions he felt after he saw the words “GOD IS DEAD.” spray painted on the outside brick of their church the following morning.

After going from anger, confusion and sadness, Pastor Keegan wrote that his heart and mind ultimately settled on “Compassion.”

“So to the individual(s) who choose to damage our building, please hear/read these words,” he wrote. “I Love You, the Church loves you, and most importantly Christ Loves you. I invite you come have a conversation with me, I want to know you and I want to hear who you are and what it is you are going through and why you chose to do this, and to hear the questions you probably have. I invite you to come to our services, to see who we are, to hear the truth of Christ and for you to experience the love of Christ through our community. Whatever anger, hurt, or issue you have with the Church, I invite you to share them with us so we can walk along side you. Despite what has happened and what you did, we truly care about you and love you with the heart of Christ.”