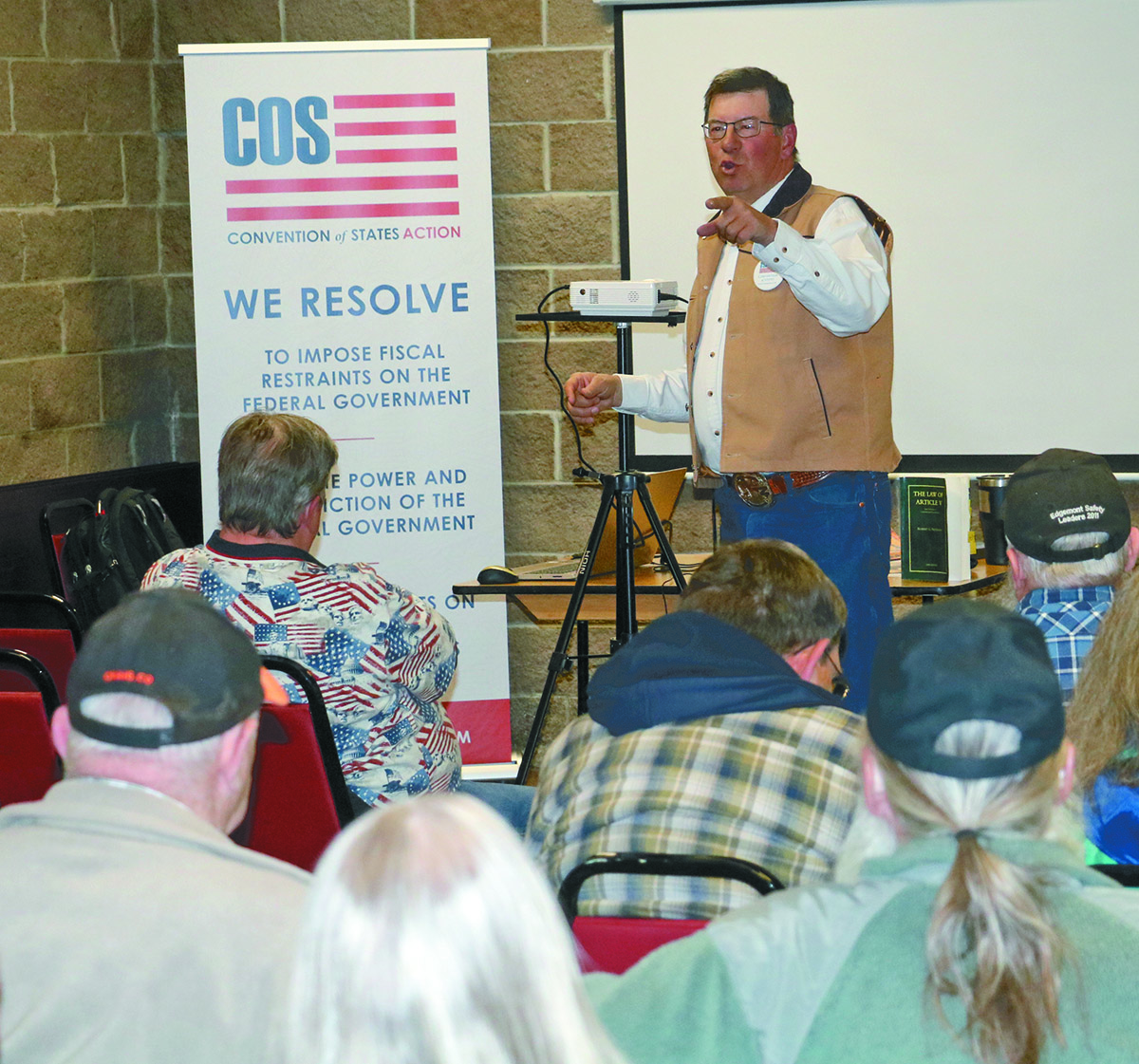 Harvey Fitzgerald of Buffalo Gap addresses a question from the audience during a town hall meeting he hosted last Wednesday, April 21, at the Mueller Civic Center.

HOT SPRINGS – In an approximate 90-minute, town hall-style meeting at the Mueller Civic Center last Wednesday, April 21, about three dozen audience members learned what it would mean to have a “Convention of States.”

Harvey Fitzgerald of Buffalo Gap conducted the meeting, which was one of three scheduled in the Southern Hills during the month of April. Fitzgerald is the District 30 Captain for Convention of States. He is a lifelong West River resident and a retired National Guard/military member of 34 years with combat experience.

Fitzgerald told the audience at last week’s meeting that the grassroots Convention of States movement is not anti-government and promotes a “system of laws, instead of a system of men” which emphasizes a “will of the majority.”

He said the founding fathers of the United States “knew at some point in time that Washington would be the problem,” which is why they unanimously added the Article V amendment process before the U.S. Constitution of finalized more than 230 years ago in 1787.

Through a powerpoint presentation, Fitzgerald explained how Article V allows for amendments to the constitution to be passed through two different means. The first way, which thus far has been the only way, is through a two-thirds approval by the U.S. Congress and then a three-quarters passage by the States themselves, or a total of 38 states.

The second way in which an Amendment to the Constitution can be passed is through a two-thirds approval by each of the 50 State Legislatures (34 states) which would then create a “Convention of States,” that would meet and allow just one vote per state. The “convention” would only be held to “propose” an amendment for a very specific purpose, which would need to be established and agreed upon at the beginning of the process, Fitzgerald said.

In order for the proposed amendment to be ratified, it would then also need to be approved by the same three-quarters of the states (38) that are needed in the aforementioned Congress-driven amendment process.

The three pillars to the current nationwide effort to create a Convention of States are as follows, according to Fitzgerald: control government spending; limit government power; and, term limits. There are currently 15 states that have passed bills to call for a convention based on these three pillars. There are 11 more states needed in order to attain the 34 required.

Fitzgerald said the process to create an amendments to the constitution is difficult, as it should be, he emphasized.

South Dakota is not one of the 15 states that have passed Convention of States legislation, but Fitzgerald said he feels there is growing support of the concept, with state legislators in Pierre split about 50/50. He said the oppositions’ main objection is a so-called “runaway convention,” which most often refers to a convention that proposes an amendment beyond the scope of what the states contemplated when they applied for the convention in the first place. Fitzgerald however said there is an abundance of historical legal precedence which eliminates the “myth” of that ever happening.

For more information about the proposed Convention of States, Fitzgerald said to go to the website www.conventionofstates.com. Once a person feels educated enough about concept to support it, Fitzgerald encouraged South Dakota citizens to sign a petition, contact their District’s representatives and senator, and volunteer at a Convention of State event to help spread the message.