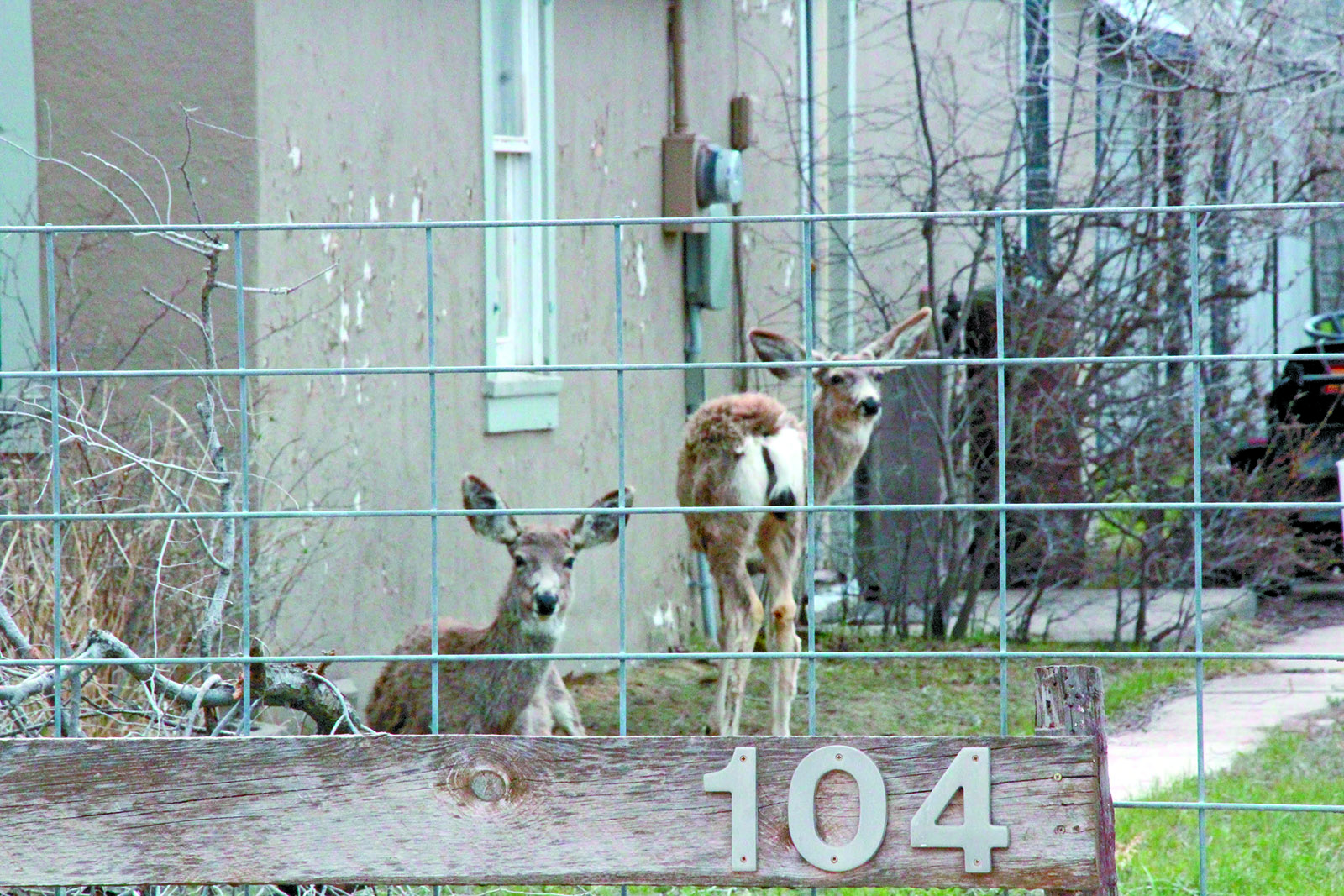 A pair of mule deer lounge near a home on 6th Avenue in Edgemont this past Monday afternoon.

EDGEMONT – On Tuesday, April 20, Trenton Haffley, Regional Terrestrial Resources Supervisor with South Dakota Game, Fish, & Parks Commission, came to Edgemont and shared his perspective on what some residents have come to perceive as a deer and turkey ‘problem’, and steps that can be taken to remedy the situation. Mule deer and turkeys can be seen just about anywhere in town but at times the deer concentrate between A Street and Hwy 18, with as many as 20 or so animals leisurely lounging around or lying in the grass.

“The problem you have in any town is that some people hate wildlife in their residential yard while others feed them and enjoy having them around,” says Haffley.

Regardless of how much they are appreciated by some, ‘habituation’ or becoming conditioned to the presence of humans and alternative food sources almost always leads to problems, according to Haffley. “Every other year in these situations, a dog gets killed by a deer or deer come to exhibit aggressive behavior towards people,” he said.

Municipalities getting routine complaints from their citizens on nuisance wildlife often contact Game, Fish, & Parks seeking a quick solution to their problem, which did not come about over night. Haffley said that Whitewood, Rapid City, Custer, and Sturgis were issued ‘kill permits’ in 2020-2021 which allows for lethal removal of deer. He said that Rapid City spends approximately $18,000 annually for deer removal. While kill permits can come to be viewed as an ultimate strategy, Haffley suggests that they be viewed as one tool in the tool box among others that would instead be utilized as a last resort.

“In a perfect situation, we would start working with a community like Edgemont before problems like feeding and habituation become highly problematic,” Haffley stated.

Haffley said that Game, Fish, & Parks will work with towns to alleviate their nuisance wildlife problems, but on the condition that a deer management plan and an ordinance prohibiting feeding are part of the solution on the municipality’s end. He added that while most harassment of wildlife is deemed unlawful, habituated deer should be made to feel uncomfortable in an effort to discourage their routine presence in town. “If you see 22 deer bedded down, make them uncomfortable and reverse the habituation,” he advised. He recommended noise-making devices or things that blow around in the wind as a means of discouraging deer and turkeys that just hang out in the same area.

Regarding turkeys, if a municipality is making a ‘good-faith’ effort to reduce turkey numbers through a feeding ordinance and management plan, then Game, Fish, & Parks would assist with turkey trap and transfer if such action promotes the agency’s objectives. He said that in some areas, relocated birds may be placed to augment the local populations in an effort to satisfy hunter demand, but the state does not guarantee this service will be offered in subsequent years.

Food provisioning, whether done intentionally or secondarily as in the case of deer or turkeys visiting bird feeders, is usually the primary source of the problem. For folks who enjoy watching their feeder birds, the use of some sort of fencing material to create an exclosure around feeders is the most practical way to prevent them from drawing the larger, unwanted wildlife to their yard.